A lifetime of experience tells me that people are motivated first and foremost by their self-interest, particularly their economic self-interest.

The same is true for countries.

Would the United States even be involved in the Middle East but for our dependency on oil from that region over the last half century?

Most wars that have been waged over the years have been to either protect or promote economic interests.

There is a lot of talk in the media today about Russian influence in our Presidential election. All of which is to have us somehow believe that Putin and the Russians wanted Trump to win and Clinton to lose.

Of course, the Director of the FBI and Obama's Director of National Intelligence have already told us that there is absolutely no evidence that one vote was changed as a result of Russian interference.

However, we are being told the Russians still sought to influence the election in order for Trump to win.

Let's take a look at that question in terms of economic self-interest to see how logical that argument is.

Let's put that into better context.

Three states (California, Texas and New York) each have larger GDP's than does Russia. 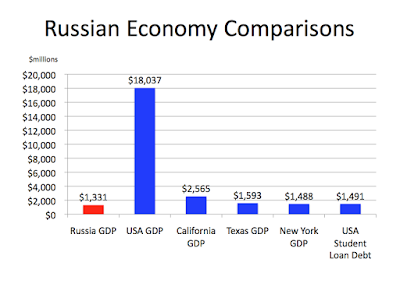 What is the most important segment in the Russian economy?

Energy. There is not anything even remotely close after that.

The quote below is from an energy profile and analysis of Russia that was published in 2015 to give you an idea how significant energy dollars are to the Russian economy.


50% of Russia's federal budget is tied to oil and natural gas revenues?

68% of total exports are related to oil and gas?

Russia's proven oil reserves are just about twice what the United States has.

Russia has the largest gas reserves in the world and is the second largest producer of dry natural gas. 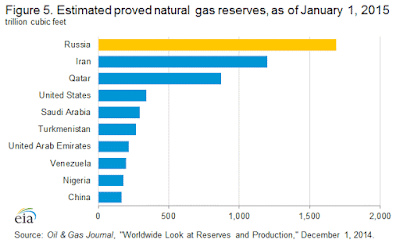 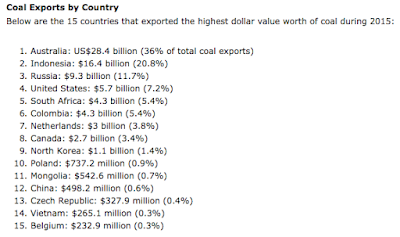 Does all of this suggest to you that energy prices, particularly the price of oil and gas, are very, very important to the Russian economy?

In fact, there is much to support the proposition that much of the Crisis in Ukraine was driven by energy concerns including Russia's continued ability to use pipelines across Ukraine to get to their important markets in Europe and recently discovered natural gas fields off the coast of Ukraine. This is not to suggest there were not also defense and nationalistic reasons for Putin to do what he did, but it is hard to ignore the link between energy revenues and the economic fortunes of Russia. Those energy revenues are also very critical to the regime of Vladimir Putin. After all, hungry and unhappy people often become rather angry about their leadership.

Of course, that crisis led to significant economic sanctions being placed against Russia by both the United States and Europe which serve to limit the ability of Russian energy companies to access U.S oil technology and U.S. and European capital markets for energy-focused projects.

This chart shows how Crude Oil Prices (Brent-Europe) have moved since the beginning of 2014. Prices today are less than half of what they were three years ago.

You can see the effect that lower oil prices had on the Russian ruble in 2014 as oil prices dropped in the graph below. It should be noted that the impending effects of sanctions undoubtedly also had effects on the value of the ruble during that period.


The situation is not much different today. Oil is at $50 per barrel and the ruble is trading at 56 to the U.S. dollar. In dollar terms, the price of oil has been cut by more than half. To make matters worse for Russia, the ruble only buys half as many dollars.

Considering everything above, what is the most important factor for Russia's long-term economic well-being?

Was it the candidate who wanted to build the Keystone pipeline, lift the Obama moratoriums on drilling on federal lands, lift the restrictions on new drilling technologies, rescind Obama-era EPA rules on drilling and coal and end the excessive regulations of fossil fuels?

All of these positions of Donald Trump would serve to lower oil and gas prices by increasing U.S. and global supply.

Hillary Clinton's policies would have done the exact opposite. In fact, she was on record during the 2016 campaign as saying that "we need to move away from coal and all the other fossil fuels as energy sources".  That was about the same time she was saying she would put all of the coal workers in the United States out of work. She might have thought those statements were in her own self-interest in order to play to her liberal left base of voters. However, it could not have been further from our nation's economic self-interest.

At the same time, if you were sitting in Vladimir Putin's chair, wouldn't those positions be music to your ears? What could be better for Putin than a U.S President who wanted to exorbitantly raise the prices of fossil fuels in order to make green energy projects more viable?

The argument could be made (and is the most plausible reason for any Trump favoritism on the part of Russia) that Putin figured he might be able to cut a better deal with Trump on lifting the sanctions than he could with Clinton. However, this would have not solved the real problem for Russia---low oil and gas prices. That can only be accomplished by changes in the supply/demand relationship for oil and gas.

However, even if this was the case, who would you rather be negotiating against on the subject of sanctions? Donald Trump or Hillary Clinton? Don't you think that Donald Trump would get something in return that Hillary Clinton wouldn't even dream of if this subject came into play?

And do not let it be forgotten that Secretary of State Hillary Clinton is the person who in October, 2010 signed off on the transaction allowing Russian energy company Rosatom to effectively acquire and control 20% of U.S. uranium reserves.

If you review the entire Russian influence story based on simple logic, economic facts and self-interest, why would Vladimir Putin and Russia have any reason to prefer Trump over Clinton?

It just doesn't add up in any shape or form when you look at it from that perspective.

And what other perspective could there be other than looking out for your own economic self -interest?

Have you seen or heard any of this reported or discussed in the mainstream media?

That is the real Russian scandal.
Posted by BeeLine at 8:43 PM