There is one absolute when considering human behavior.

For example, our illegal immigration problem from Mexico and the outsourcing of jobs from the U.S. to Mexico can be explained in one chart. It is all about incentives. 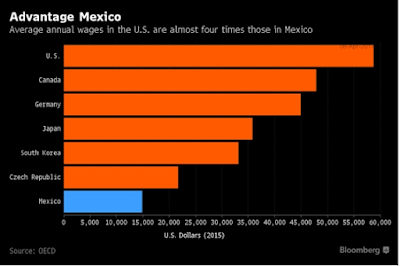 Wages in Mexico are one-fourth what they are in the United States. That is a powerful incentive for the owner of a manufacturing plant to transfer its production to Mexico.

Considering the natural incentives in place in the form of the wage differential, wasn't it rather foolish to not enforce our immigration laws and to also sign a free trade agreement with Mexico?

Is it any wonder we got the result that we did in mass illegal immigration from that country as well as the loss of scores of U.S. jobs to Mexico?

The incentives by themselves told us it would lead to a bad result. Our public policy then made the situation even worse.

We see this all the time in public policy.  If you pay people not to work, they will not work.  If you give aid to single mothers with dependent children, you will end up with more children who are dependent. If you penalize corporations by taxing repatriated earnings, they will not bring money back to the United States they earned (and were taxed on) overseas. If employers get a tax advantage for providing health care to their employees, you end up with an employer-based health system rather than an individual-based market. If you provide low-cost federal student loans, more kids will go to college but more and more loans are necessary for everyone because colleges can increase tuition with little consequence.

Nowhere have we seen the perverse effects that occur with misaligned incentives more clearly than in the welfare system of the United States.

Many of the major elements of our social safety net programs were introduced as part of President Lyndon Johnson's "War on Poverty" in the mid-1960's. One of those programs was the Food Stamp Act of 1964.

Of course, today it is no longer officially called the food stamp program, it is called the Supplemental Nutrition Assistance Program ("SNAP') and they don't use stamps anymore, recipients get an EBT Card (Electronic Benefit Transfer).

If it was a "War on Poverty", we lost the war a long time ago. It seems that the more money we spend on combating poverty, the more people who end up in poverty. 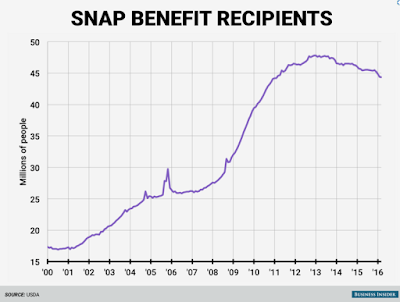 The chart below shows the growth of the number of households on food stamps by state since 2000.


Could it be that the incentives are not aligned properly when it comes to food stamps?

The State of Maine, led by Republican Governor Paul LePage, recently began enforcing work and volunteer requirements in order to continue receiving food stamps. These have been part of federal law since President Clinton signed welfare reform legislation into law in the 1990's. However, many states had waived out of the requirement in the wake of the Great Recession.

In effect, the "new" rules are old rules that were first used in the 1990's and had a dramatic effect in reducing the welfare rolls and getting more people in the work force. However, the Obama administration and big government liberals wanted nothing to do with anything that might actually have been proven to work.


The new rules prevent adults who are not disabled and do not have dependents from receiving food stamps for more than three months - unless they work at least 20 hours a week, participate in a work-training program or meet volunteering requirements.

In other words, for those who are able-bodied and do not have dependents to care for, they need to get out and do "something" to better their lives in order to continue receiving food stamps. Work, get trained or volunteer. It is their choice. However, if their choice is not to do anything, they are stricken from the food stamp rolls. Once stricken, an individual must wait at least three years before they can again receive food stamps.

What happened once Maine starting enforcing the rule this year?

75% of these people decided that the idea of working, getting trained or volunteering was too much effort to expend to continue getting food stamps. Maine had 12,000 such individuals receiving food stamps at the beginning of the year---it now only has 2,680 as of the end of March.

If you want the right result you need to pay attention to the incentives in any system involving human beings.

If people in poor countries are incentivized to immigrate to the United States because it pays 4 times as much in wages, you better make sure you have a way to deal with it. That is why there are immigration laws and why they need to be enforced.

If business owners are incentivized to move their manufacturing to a lower labor cost market, you better have a way to deal with it. You don't allow those owners to chase the lower wages and then turnaround and let the products flood back into the U.S. market without some type of import duty, tax or tariff.

When we start studying the incentives that drive people, and develop public policy around that reality, the country and world we live in will be a much better place.