One Person (or Several Judges) Can Make A Difference

One of the great things about the United States of America is that one person can literally make a real difference. The freedom is there to take an idea and change the country, if not the world.

In our lifetimes we have seen it done so many times.

Walt Disney. Sam Walton. Bill Gates. Steve Jobs. Jeff Bezos. I could go on and on in the business realm.

The same can be said in the political arena.

Wayne Wheeler is a name most people have never heard of. However, he is the man most responsible for the passage of the 18th Amendment to the U.S. Constitution banning the manufacture, sale of transportation of liquor which became none as the Prohibition era in the United States.

Wheeler's anti-alcohol stance dated back to when he was a young boy and a hired hand at his family's farm was so drunk that he drove a pitch fork into Wheeler's leg without comprehending what he was doing. Things like that have a way of staying with you. Wheeler's focus over his entire life then became to wipe out what he saw to be the scourge of alcohol in the country.


I wrote about the political lessons of Prohibition in the blog, "People, Power and Prohibition." Prohibition would never have occurred but for the steadfast resolve and persistence of Wayne Wheeler. Wheeler changed the entire arc of American history.

Much like the story of Wheeler and Prohibition, I came across a story this week that reminded again of the power of one person. It is the story of Gregory Watson who received a "C" on a paper on the U.S. Constitution in 1982 as a college student and ended up being the driving force for the ratification of the 27th Amendment to the Constitution.

The story begins in 1982. A 19-year-old sophomore named Gregory Watson was taking a government class at UT Austin. For the class, he had to write a paper about a governmental process. So he went to the library and started poring over books about the U.S. Constitution — one of his favorite topics.

“I'll never forget this as long as I live,” Gregory says. “I pull out a book that has within it a chapter of amendments that Congress has sent to the state legislatures, but which not enough state legislatures approved in order to become part of the Constitution. And this one just jumped right out at me.”

Basically, it means any raise Congress votes to give itself can’t take effect until after the next election, allowing voters to decide how they felt about that.

The amendment had been proposed almost 200 years earlier, in 1789. It was written by James Madison and was intended to be one of the very first amendments, right along with the Bill of Rights.

But it didn’t get passed by enough states at the time. You see, to ratify an amendment, you need three-quarters of states to approve it.

This amendment, though it was 200 years old, didn’t have a deadline.

Gregory was intrigued. He decided to write his paper about the amendment and argue that it was still alive and could be ratified.


Despite all his work, Gregory Watson received a "C" on that paper. It was thought to be just another paper for just another undergrad student by the Teaching Assistant who graded the paper and his professor who upheld the grade after Watson complained to her.

However, Watson wasn't just like any other student. He thought the "C" was unfair and he committed then and there to see what he could do to get the forgotten amendment ratified.

He started writing letters and calling people in Washington and various state capitols. He did not stop for 10 years.

The 27th Amendment was formally adopted as part of the U.S. Constitution in 1992.

By the way, that is the last formal amendment that has been made to the Constitution ---25 years ago.

One man---Gregory Watson---made a difference.  And last month he got the grade he deserved. UT Austin formally changed the grade he got in that Government class from a "C" to "A+".  Better late than never. 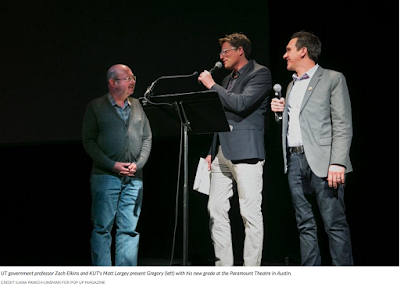 While reading the story I also came across an interesting section of the article that includes a quote from the professor at UT Austin who tipped off the press to this story. He makes the point of how difficult it is to amend the Constitution and the reasons why it should be so hard.

What’s so striking about this story is the sheer degree of difficulty of what Gregory did. Amending the Constitution is — by design — incredibly hard to do.

"The founders saw this as higher law,” says Zach Elkins, a government professor at UT-Austin who introduced me to this story.

"So in some sense [the Constitution] should be beyond the reach of majorities and certainly a majority in the legislature, which makes sense for higher law. You want something a little more stable.”


I have made the same point a number of times in my blog posts over the years.

That is why it continues to befuddle me how we have come to the point that several judges can effectively amend the Constitution to circumvent this carefully considered and deliberative process?

It is not the way our Founders intended the process to work. No changes were to be made until there was real consensus for it to be done. Not just mere majorities in Congress. A 2/3 vote in both houses. Note just a mere majority of the states. 3/4 of the states.

And certainly not a mere majority of the Supreme Court to effectively amend the Constitution.

The amendment process is arduous. It is hard. It was meant to be hard.

There was a time when the Constitution meant something.  It was respected for what it was.  So were the limitations that were carefully crafted into the document by the Framers. Even when there was pretty compelling language in the Constitution to bend it to the "current times" it was ruled out of bounds.

If the American people want a federal government with expansive power they can have it. They can ban prayer in schools or make sharia law the law of the land. They can allow gay marriage. Or ban it in all 50 states. The same with abortion. They can ban the use of alcohol or repeal the ban and allow it again. They can require everyone to buy health insurance or anything else. However, these types of issues should not be decided by a handful of people. Certainly not by judges who are not supposed to make law.

It is simply not within the power of a handful of judges to suddenly discover fundamental rights that have somehow been hidden in the Constitution for over 200 years and start applying them to 310 million citizens by fiat. Several judges should not make this much difference. Period.

Why has the Supreme Court taken on such importance today? Why are the Democrats so intent to filibuster one of the most qualified jurists you could ever think of in Neil Gorsuch?

And for that reason, Neil Gorsuch is a supreme threat to Democrats. The same can be said for any Republican nominee to the Court. This is just not a confirmation. This puts their entire agenda at risk. They know that they do not have the support of the necessary majorities of American voters to support and extend their progressive agenda. They do not want to follow the Constitution to get there.

Our Founders wanted a clear consensus before we made radical changes to the rules that governed us. The Democrats simply don't want to wait and do the heavy lifting necessary to get what they want.

If you want to know a major reason why the country is so divided right now look no further than what the Supreme Court has done to undermine our constitutional principles. It has moved the country before it was ready to move to support that progressive agenda.

One person can make a difference. Thanks to Gregory Watson for showing that and demonstrating how our Constitutional process is supposed to work.

However, several judges should not be making a difference. That is not the way our Constitutional process is supposed to work. Judges should be weighing the scales of justice rather than tipping the scales for some political agenda.

The sooner we return to this constitutional principle, the better we all will be.
Posted by BeeLine at 6:33 PM