April is the time when high school seniors are making their decision on where to attend college. The acceptance letters have been received. It is time to send the the deposit money in. It will be the first of many checks over the next four (or five?) years for these students.

College enrollment has been in decline the last few years. 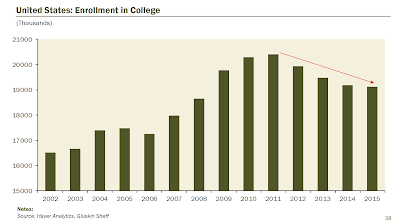 This has been largely driven by a declining number of those turning 18 in the U.S. population. This decline is leveling off but will still result in approximately 5 million fewer 18-year olds each year over the next decade than there were in 2009. 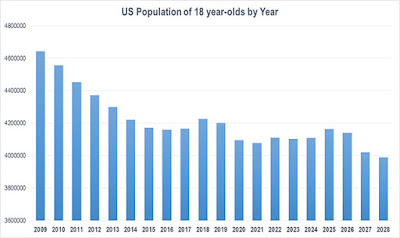 This will put additional pressure on the budgets of many colleges and universities as they compete for a smaller applicant pool while being burdened by higher debt loads that funded a massive amount of building and renovations over the last decade.

Two years ago I wrote about the higher education "arms" race in Ohio with specific reference to the substantial levels of debt that Ohio public universities had taken on since 2004. It is the same across the country where public universities have doubled their debt load over the last ten years, according to Moody's Debt Service. 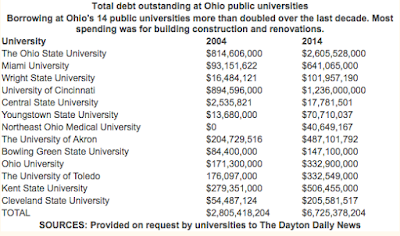 Where has the money gone from all of this borrowing?

Some went for new classroom buildings and technology upgrades. However, a lot of the debt has been taken on to pay for student amenities such as rec centers, student centers, food courts, hip residence halls, climbing walls and lazy rivers.

In recent years, colleges have embarked on a massive facilities binge in a competition to attract students that is reminiscent of the old-fashioned defense arms race between the U.S and the U.S.S.R. Dorms that resemble the TajMahal, recreation centers that look like they could be an Olympics venue and dining halls that are fit to serve meals straight from The Food Channel.

It all costs money, and tuition and fees need to go up to pay for the luxuries, and the added debt. Bucking the trend is career suicide to the college administrators should they fail to enroll the necessary numbers to fill their incoming classes with a declining pool of eligible students. After all, nobody wants to lose a good student and the tuition money that comes with her because they did not have a rock climbing wall in the rec center.

However, the reality is that the university borrows the money for the facility upgrade, it passes the cost on to the student, who has to take out a federal student loan to pay the tuition and fees, and the federal student loan program is, in turn, funded by additional federal government borrowings (or Federal Reserve QE)!

A vicious cycle if there ever was one. Where does it end?

Most states in the Northeast and the Rust Belt will face the greatest enrollment challenges as these states will see larger declines in the number of 18-years olds than states west of the Mississippi River.

Of course, not all colleges are going to feel the challenge of declining student age  population the same. The top-ranked and highly competitive schools in a state or region have the high ground. They will get the students to fill their dorms and classrooms. It is the colleges further down the higher education food chain that have the most to lose.

Consider the Ivy League schools that span the Northeast states. All these states will be experiencing declines in college age populations exceeding the national averages over the next decade. However, the Ivy League is unlikely to feel any effect at all from this decline in the student population.

They draw from a national student base, they have unparalleled brand appeal, they have huge financial endowments and they receive massive federal taxpayer support in the form of federal contracts, grants and direct financial assistance for students.

The numbers are staggering as compiled in a recent report by Open the Books, a non-profit organization whose mission is to compile and post online spending at all levels of government.

One big item that Open the Books has focused on is the size and tax-exempt status of the endowment funds of the Ivy League schools which now total over $119 billion. That is equal to about $2 million per undergraduate student.

To put that it context, that amount of money is enough (even without any more gifts) to pay for the entire tuition of every undergraduate student at the Ivy's for the next 51 years.

Needless to say, Open Secrets questions whether the tax-exempt status should be maintained for these university endowment funds.

You begin to understand this perspective even better when you considerh that the eight Ivy League universities actually derived more in revenues from the federal government through government contracts and grants ($25.27 billion) than in supporting their educational mission ($22 billion in student tuition) for the fiscal years 2010-2015. 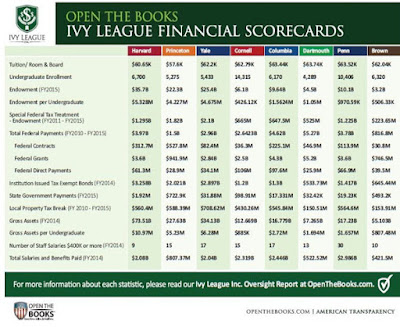 The law of supply and demand would suggest that with reduced numbers of college-age students that there should be some moderation in college costs over the next decade.

However, with the federal government providing more than $100 billion in funds that annually pay those college costs, that is not likely to happen.

Isn't it curious that those two areas of the economy which have seen the greatest infusion of government money have also seen the highest inflation costs over the last 40 years? 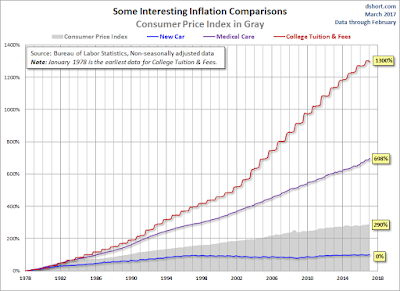 Coincidence? I think not.
Posted by BeeLine at 8:23 PM