Global warming is making hot days hotter, rainfall and flooding heavier, hurricanes stronger and droughts more severe. This intensification of weather and climate extremes will be the most visible impact of global warming in our everyday lives. It is also causing dangerous changes to the landscape of our world, adding stress to wildlife species and their habitat.

This statement by the National Wildlife Federation is typical of those who have bought in to the religion of climate change and man-made global warming.

Of course, the high priest of climate change is Al Gore. This is what Gore said about extreme weather at the 2016 Climate Action Conference in Washington, D.C.

The climate-related extreme weather events – and I won’t go through all of them – but every night on the television news now is like a nature hike through the Book of Revelation.


Many of you may also remember last year when many liberals who worship at the climate change altar were also saying that California's five-year drought was permanent due to global warming.

That was a year ago. This is now. Water levels at almost all of California's major reservoirs are at or above historic levels.


Talk about an inconvenient truth.

Or consider this recent report by the U.S Drought Monitor that indicates that drought levels have fallen to records lows in the lower 48 states (since the monitor started 17 years ago) with just 6.1% of the nation experiencing such dry conditions. 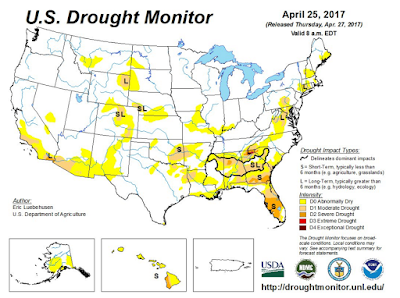 What was that about droughts being more severe?

It is just not droughts either. This data all relates to the United States as recently summarized by Marc Morano of The Climate Depot.

"It is not just droughts that are at or near record levels. On almost every measure of extreme weather, the data is not cooperating with the claims of the climate change campaigners. Tornadoes, floods, droughts, and hurricanes are failing to fit in with the global warming narrative."

Hurricane activity has been declining. In fact, despite category 1 hurricane Matthew that heavily damaged Hilton Head Island last Fall, there still has not been a category 3 hurricane to make landfall in the United States since 2005.

Flood disasters are also sharply down in the United States compared to what we have been accustomed to seeing over the years.

Al Gore and others have argued for years that global warming will bring us more extreme weather. The facts have been the exact opposite almost from the day he started saying it.

Where is the extreme weather?

Perhaps it is outside the United States? After all, weather and climate know no borders. 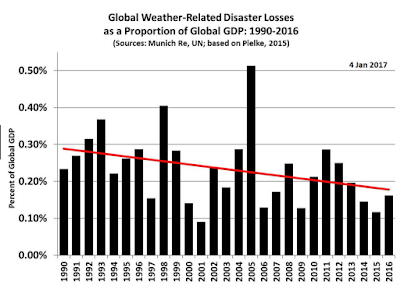 This could be due to better loss prevention controls. However, any improvement in this regard is probably cancelled out by much more costly development along coast lines throughout the world.

Despite the evidence, why is Al Gore able to keep saying what he does and why do so many people readily believe it?

The easiest answer is due to the recency bias that is present in our brains. We remember and put the highest value on those things we experience most recently. This has become an even bigger issue in our modern age as we are deluged with images, videos and news from around the world. However, no one is providing any context with this news.

We see the egg frying on the sidewalk in Dallas. We see the half-filled reservoir in California. We have 24 hour coverage of every hurricane that might threaten the United States. We have iPhone video of the tornado that struck Canton, Texas on Saturday night.

Looking at other extremes, we even see pictures via Twitter of the Pac12 golf championship in Boulder, Colorado that was disrupted by snow this weekend. 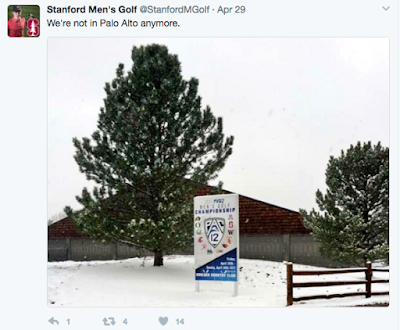 It has been said that if you are a hammer everything looks like a nail.

I guess it could also be said that if you have fallen for the climate change mantra, every weather event looks extreme.

The only extreme thing I can see in all of this are the views of the Climate Change lobby.

They have no room for debate, discussion or dissent irrespective of any inconvenient truths that get in the way of their "settled science".  It is beyond me how they can continue making the claims they have made about increasing levels of extreme weather when the facts totally contradict their claims and predictions.

They call the people that don't agree with them "deniers". Looking at what they have said and what has actually occurred regarding extreme weather, you have to ask what are they?
Posted by BeeLine at 7:38 PM