I am biased. You are biased. Everyone is biased.

It is the way our brains are built.

Daniel Kahneman, who won the Nobel Prize for his work in behavioral economics, wrote this in his book, "Thinking Fast and Slow".

"A remarkable aspect of your mental life is that you are rarely stumped.  The normal state of your mind is that you have intuitive feelings and opinions about almost everything that comes your way. You like or dislike people long before you know much about them; you trust or distrust strangers without knowing why; you feel that an enterprise is bound to succeed without analyzing it'"


In other words, you have an opinion or bias about almost anything before you are even confronted with facts. And even when you have those facts, you are likely to interpret them in such a way to reinforce the opinion you had at the outset.

No where is this more evident today than in the reporting of the mainstream media on President Trump. They did not like him when he was running. One survey found that 96% of them contributed to Hillary Clinton during the campaign. They like him even less now that he is President.

No matter what Trump does the mainstream media will spin the story to their bias.

As an example, here is a graphic to show positive vs. negative stories on the Big 3 networks for the first month of the Trump Presidency. This used to be called the "honeymoon" period. There was no honeymoon for Donald J.Trump. 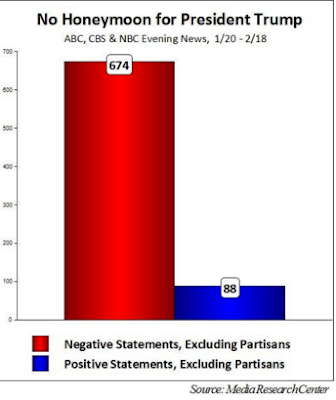 By comparison, here is a study that the Pew Research Center did on media coverage of Barack Obama during his first 100 days. Positive stories outnumbered negative by about 2:1. 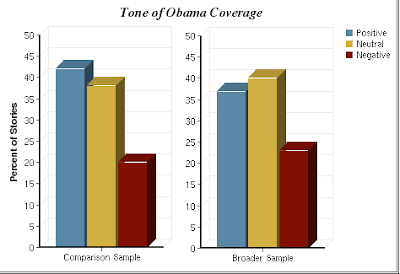 Of course, it is one thing to let your bias show through when you are writing a blog like BeeLine and it is something altogether different if you are allegedly a "journalist" who is supposed to report a story supported with facts.

I came across just such a story when a friend of mine sent me this article from Tom Randall in Bloomberg titled, "The Cheap Energy Revolution Is Here and Coal Won't Cut It".

Wind and solar are about to become unstoppable, natural gas and oil production are approaching their peak, and electric cars and batteries for the grid are waiting to take over. This is the world Donald Trump inherited as U.S. president. And yet his energy plan is to cut regulations to resuscitate the one sector that’s never coming back: coal.

Clean energy installations broke new records worldwide in 2016, and wind and solar are seeing twice as much funding as fossil fuels, according to new data released Tuesday by Bloomberg New Energy Finance (BNEF). That’s largely because prices continue to fall. Solar power, for the first time, is becoming the cheapest form of new electricity in the world.


You can see the bias in the article almost immediately with the swipe at Trump and the coal industry and you understand it more fully when Randall later warns of the coming catastrophe from climate change if we don't totally eradicate carbons from our economy.

Just meeting the Paris goals for emissions reductions doesn’t go far enough to fend off the catastrophe scientists anticipate from climate change. Eventually the economy will need to decarbonize completely—in energy, agriculture, construction, manufacturing, and land use. And solutions for some of the trickiest and most expensive parts of that equation are still decades away.


There are a lot of good charts and encouraging news about the development of renewables in the article. However,  I couldn't help but think that I was not getting the whole story while I was reading it with the bias that was underlying the entire piece. Therefore, I did some fact checking myself.

Let's look at a few of the "facts" from the article.

Renewables are beating fossil fuels 2:1 in investment in power capacity.

I assume this is true but why is that? A big reason is that a majority of states (link to the entire list of states) have mandated that utilities in their states sell or produce a certain percentage of power from renewable sources. For example, California requires that 33% of all power in the state be from renewables by 2020. If you have a coal, gas or nuclear plant why would you invest any more in these assets if you are faced with this requirement? Even worse, if you have a perfectly good working coal plant, this mandate could force you to close it down to meet the mandate. Who pays for that? The consumer.

Coal is getting crushed

Coal has obviously been crushed. However, when did coal start its downward slide? It coincidentally began right at the time that the Obama administration and its EPA decided that they wanted to regulate it out of business. Of course, the emergence of fracking and new abundant supplies of natural gas has made gas much more price competitive at the same time. You be the judge on how much has been market forces and how much of coal being crushed has been due to government regulation (which the author fails to mention).

Americans Are Spending Much Less on Energy 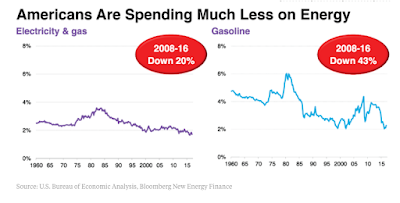 Yes, Americans are spending less on energy than they did in 2008. Why is that? A lot of it has to do with the advances in fracking, horizontal drilling and new discoveries of shale oil and gas deposits. By the way, these are all things that the climate change lobby did not want us to do. What would the costs of energy be without these advances? What if we had relied solely on renewables as Obama and the author of this article seems to want us to do?

A big reason is that renewables like wind and solar only generate intermittent power. There always needs to be back-up generation capacity. If the sun isn't shining or the wind is not blowing, you need another power source and that generally means fossil fuels. That also means that consumers are paying for both sources of power.

Todd Royal of Energy Post presents a more balanced view of the future of renewables titled "What Is Holding Back Renewables?"

When looking at the total cost of renewables versus coal, natural gas, and oil there really isn’t a comparison in the near-term because wind and solar can only generate intermittent electricity, while nuclear and hydroelectric energy face significant social and environmental resistance. Fossil fuels can be run without backup supplies, and factoring in those expenses – even with renewable technology having achieved significant cost reductions – fossil fuels are the most economical, scalable choice.

After I first read the Bloomberg article and I sensed the inherent bias, I sent it to a BeeLine reader who is a retired utility executive and knows a great deal about this subject. I asked him if I was misreading anything in the article? Was the author revising and reserving a few facts from the article? He told me that my instincts were correct. Renewables are not as cheap as portrayed.

In addition, he pointed me to a recent story about Idaho Power in which that utility recently sent out a letter to all its customers advising them of a rate hike due to a surplus of renewable energy. How can that be? You can read for yourself the explanation of how this could occur but it points to another federal law that is at play in this area---PURPA--the Public Utility Regulatory Purposes Act.

The federal government enacted PURPA in 1978 during America's energy crisis, partly to encourage greater use of renewable energy.  The law requires utilities, like Idaho Power, to buy all the power generated from small, independent projects, like wind and solar, even if the utilities don't need the extra power to meet customer demand.


PURPA is undoubtedly another reason why so many renewable projects have been funded in recent years. How can you not like a project as an investor when you know you have a captive customer the minute it comes online? And that revenue stream gets set and established under a 20 year contract from inception with the utility customer.

Of course, a wind farm can generate power but that power also has to get to the grid. That cost is borne by the utility and, as my BeeLine source shared with me, with costs of building transmission lines at nearly $1 million per mile, it is a significant cost. This is even more so when the power generation from a wind farm is so variable. A line from a wind farm may also only be used 30% of the time--- a line from a traditional power source is used nearly 100% of the time. Who pays in the end for this additional cost? The consumer.

What do I make of all of this?

The "Cheap Energy Revolution" is not nearly as cheap as Tom Randall of Bloomberg wants you to believe it is. Or what his bias wants it to be.

We may get there one day. I am all in favor of cheap, renewable forms of energy. However, biased reporting does not make it true today by proclaiming it is "here".

Trump is right to get government off the back of the coal industry. It remains our most abundant energy source. It is foolish to not utilize it to the fullest extent.

Let renewables beat it fair and square. Don't let the climate change lobby do it. Or biased reporting.