There was once a time when central banks owned gold and silver to back their currency.

In fact, each dollar of U.S. currency could at one time be converted to silver of equal value. This was denoted on paper currency which were called "Silver Certificates".

Note that on the top of this 1957 silver certificate bill it states,

and it continues on the bottom,

"One Dollar In Silver Payable To The Bearer On Demand."

The United States ceased producing silver certificates in 1964 and ceased redeeming these bills for silver in 1968.

What do you get today? A Federal Reserve Note. What is on deposit backing that up? These are the reported gold reserves held by various countries around the world. Of course, all of these are mere fractions of the currency in circulation for these countries.


The United States continues to have the largest gold reserves in the world. Contrast that with Canada which now has absolutely no gold reserves. It has sold over 1,000 metric tons since 1965.

The UK sold off half of their reserves in the 1999-2002 period which explains the UK's relatively low standing on this chart. They also managed to do that when gold was selling at about 25% of what it it trading for today. And we are supposed to believe that central bankers are the smartest people on the planet?


Many of these countries have turned to gold as an alternative to accumulating US Treasuries on the balance sheets of their central bank. The US dollar remains the world's reserve currency and US Treasuries continue to make up about 60% of reserve assets for most central banks.

On the other hand, Switzerland, which for decades has been known for its rock solid currency and has been considered the ultimate safe haven for the world's most conservative and risk-averse investors, is embarked on an altogether different diversification plan for its reserve assets. 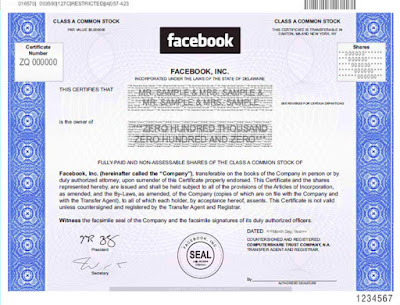 How many of those global elites know that when they are opening up a Swiss Bank account with those Swiss francs they are really relying on Facebook and other U.S large cap stocks for the backing of that currency?

This Reuters story provides the background in which it reports that the Swiss Central Bank now holds equity investments equal to over 161 billion Swiss francs in its reserves. That is about 20% of its total foreign exchange reserves. Equity holdings are up 41% in the last year. $62 billion was invested in U.S. stocks alone as of last June. That number is undoubtedly much higher today.

Why are the Swiss backing their currency with stocks?

The simple answer is that they have virtually run out of bonds to buy. As their monetary base has expanded they needed reserves to back it up. To fight the economic problems in Europe they bought so many bonds that interest rates fell to zero and below. They simply couldn't buy any more bonds at negative rates with the risk attached should rates rise. In order to continue their "free money" policies, they had to continue to expand their balance sheets and they needed to diversify their risk. Their answer has been to buy massive amounts of equities.

However, is this really a safer strategy in the long term?

When you see what is going on here you should also get a little nervous about stock market values. The Swiss National Bank is creating Swiss francs out of then air and then using those francs to buy stocks thereby pushing up the price of those equities.

The Swiss are really are not buying Facebook, Apple and Exxon Mobil directly but it is doing so through index funds to keep their transaction costs low.  Of course, these large cap stocks dominate the indexes and over the last year the share prices of the largest stocks are up around 30% compared to 15% for the S&P 500 as a whole.

The Swiss are not the only one to be using its central bank to buy equities.

Again, Japan is buying stakes in equites through passive investing using ETFs (Exchange Traded Funds). However, the equity purchases have become so large in comparison to other investors that the Bank of Japan effectively owned 60% of the nation's ETF market as of last June! 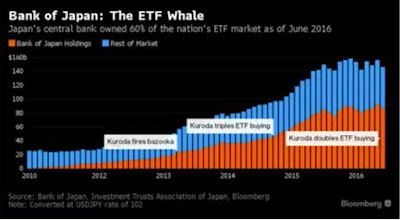 No matter how you look at it there is a lot of air being pumped into stock markets around the world as a result of massive money printing.

The question is what problems are we going to see when the air starts seeping out of the balloon or, even worse, the balloon bursts with no warning?

The good news in the United States is that under current law the Federal Reserve is barred from owning any corporate assets---stocks or bonds.

However, Fed Chairman Janet Yellen seems to be envious of some of the other central bankers in the world and thinks it might be advantageous to have that authority to help the U.S. economy in a downturn.

Why is it that in developed countries the central bankers all want more tools in their toolkit and the developing countries are only interested in gold?

We live in a very confusing world indeed when Facebook is considered to be just as good as gold.
Posted by BeeLine at 9:26 PM