I have an interest in demographics and have written about it from time to time in BeeLine.

It is a window to the future that is too often overlooked or ignored.  The long-term trends are often the most difficult to see in the 24 hour news cycle world we live in today.  In this day and age when there is so much focus on the trees (even the leaves at times!), demographics forces you to look at the forest.

I have been tracking U.S. birth rates for a number of years. The birth rate data for 2015 was recently released by the National Vital Statistics System section of the U.S. Department of Health and Human Services.

A few factoids from the report.

The chart below shows births from 1950 through 2015 in order to give you some better perspective on historical birth rates.  This is a chart that I have been tracking since the early 1990's.

You can see the Baby Boom period which existed up until 1965. It was followed by what I call the Baby Dearth period which lasted roughly from 1966-1986. There was not one year in this 20-year period in which births were above 3.8 million.

However, since 2010 there has not been one year in which births have exceeded 4 million. 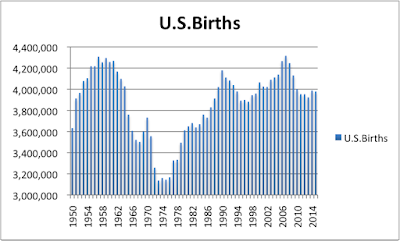 Where are we headed with births in the future?

It is already a bust in most of the rest of the developed world. And the UN expects that trend to continue and extend to the rest of the world between now and 2050 until most countries are below the replacement rate. 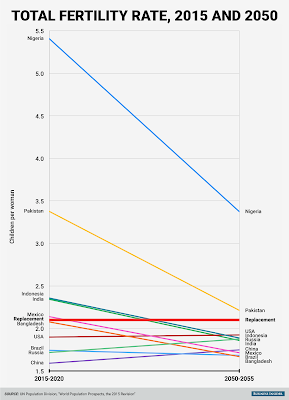 Why does it matter?

When the old outnumber the young you are heading for big problems. Who buys the real estate that has been built? Does a 60-year want to start a business?  Most inventions and innovations have historically come from those in their 20's and 30's than in their 50's and 60's.  Thomas Edison invented the phonograph at age 30.  Alexander Graham Bell was 29 when he invented the telephone. Steve Wozniak invented the Apple I computer at age 26. Larry Page and Sergey Brin were both age 25 when they incorporated Google.  If you don't replenish with enough young blood, you really do die as an economy and and as a society.

We are already in uncharted territory in historical terms on birth rates. It could become even more uncharted in the future.