The Trump Budget In Context

The Trump administration unveiled its 2018 federal budget proposal on Tuesday and it did not take long for the mainstream media and others to call it "inhumane", "improbable", "insane" or an "unimaginable level of cruelty."

The criticism from the Left seems focused on two aspects of the proposed Trump budget.

1. They don't like the economic growth assumptions used in the budget proposals. These are "improbable" or "insane".

2. They don't like the amount that will be spent on social programs. The amounts represent "deep cuts" that are "morally repugnant", "cruel", "inhumane", " heartless" and "unimaginable".

Let's take a look at these claims in context which is something we like to do at BeeLine. After all, which we so often state in these pages, "context is everything when assessing anything".

To read the headlines you would think that Trump was using wildly optimistic economic assumptions regarding domestic GDP growth compared to Obama. That is simply not the case.

Compare the two budgets for the years 2017-2022. Trump is using a lower number for 2017 than Obama did. (Was Obama's GDP assumption ever described as "improbable" or "insane"?) You can see the 2018 economic assumptions are identical. In later years, Trump has generally used a 3.0% growth estimate compared to 2.3% for Obama. 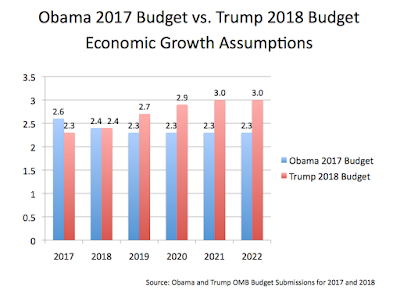 How about the claim that it is improbable?  It is true that the United States has not had annual real GDP growth of over 3% in a decade. However, in looking at a longer historical view, the U.S. has exceeded 3% growth (represented by the blue line on the chart below) for most of the post-World War II era. 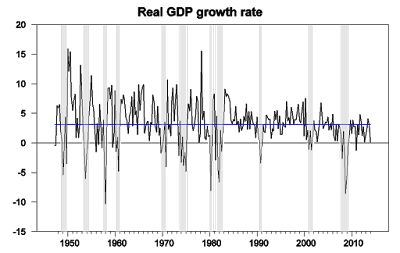 Of course, many will say that this history is irrelevant. The world economy has changed. I am old enough to remember the same thing being said in the 1970's during the Carter administration. Ronald Reagan was elected President and those arguments were soon forgotten. The U.S. enjoyed in excess of 3% real GDP growth for most of the next 20 years.

A .7% increase in the long term GDP assumption compared to Obama hardly seems "insane" or "improbable" considering the potential for regulatory and tax reform and a new focus on developing United States energy sources under the Trump administration.

What about the "inhumane", "heartless" and "unimaginable level of cruelty" in the Trump budget?

For context, let's first take a look at how the $7 trillion of the taxes we pay to federal, state and local governments are spent. Bear in mind that this $7 trillion represents about 38% of the nation's total output. In other words, almost 40% of every dollar earned in the private sector is taxed and then spent of redistributed in some way by some level of government.

By comparison, defense spending is 12%.

Let's now take a closer look at just the federal budget numbers that are the focus of the news about the Trump budget proposal.

To see the headlines above you would think there would be massive cuts in the Trump budget in the human side of the budget.

Let's also put that in context.

The 2017 Obama budget projected that $4.250 trillion would be spent in 2026 on mandatory spending in the federal budget. (Obama budget-Table S-4) 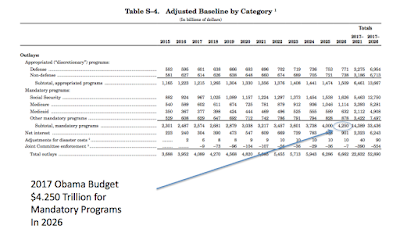 Mandatory spending encompasses most of the entitlement spending in the federal budget including Social Security, Medicare, Medicaid, food stamps, unemployment compensation, earned income and child tax credits. If Trump is being "obscene" and "heartless" it would show in these numbers.

What is the comparable projected mandatory spending number for 2026 in the 2018 Trump budget? 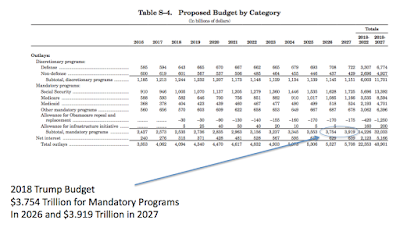 If you are doing the math, that is about a 12% overall reduction from what Obama proposed for 2026 last year.

These are the proposed increases in the various categories of mandatory spending in the Trump budget over the next decade.


In order to maintain his promise to not touch Social Security and Medicare, Trump is proposing some reforms to the Medicaid and welfare systems that it projects could save in excess of $200 billion per year in 2027. Most of these reforms are designed to increase the incentive to work in comparison to relying on the social safety net with an objective of increasing the economic growth rate to 3%.

Most of these reforms also simply change the rules back to where they were before Obama became President. In other words, the rules would be similar to what was in place when that "unimaginably cruel" Bill Clinton (and George W. Bush) were in the Oval Office. There is another $170 billion in projected savings from Obamacare repeal and replacement.

What this budget puts into focus is whether we are going to maintain our promise to those who have earned their Social Security and Medicare or whether these people will be sacrificed in order to continue to support the welfare system as it came to exist under Barack Obama?

It simply is not realistic that both can be supported in the future as they have been in the past without very large increases in taxes.

However, despite what the critics may say, it should be noted that the Trump budget ends up balanced in 2027. Yes, it does take GDP growth of 3% in the out years to get there. Yes, it does require some reforms. However, it still has a pot of $4 trillion budgeted for the social needs of 320 million people in spite of any so-called "cuts". This budget will probably never be approved by the Congress but it is certainly not "insane" or "inhumane".

That is a lot more than can be said about the last Obama budget that projected an $800 billion deficit in 2026 and going higher after that.

What do you call that?

A day of reckoning is coming sooner or later.

Someone will pay. There is no free lunch in the end.

Mick Mulvaney, Trump's OMB Director, has shown in this budget that the first choice for that "someone" is not going to be the taxpayer.

You would think that somehow, someway our representatives in Washington could find a way to live within a $4 trillion budget.

However, with government, no matter the size of the budget, is is never enough.