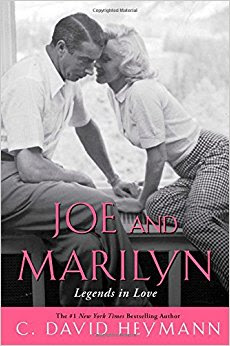 Joe DiMaggio had just retired from his illustrious baseball career when he asked a friend to set him up with Marilyn in 1952. Monroe was just on the verge of international superstar status at he time.

They each got something they needed out of the relationship. Joe, the guy who had almost everything in life, got the most beautiful woman in the world. Marilyn got a steadfast father figure who was the only man in her life that was willing to give Monroe more than he expected in return.

Despite all of that, their marriage did not last one year. DiMaggio wanted a wife that stayed home and cooked him lasagna and wore turtle necks in public. Joe was both obsessive and possessive regarding Marilyn which was never going to work with the free-spirited Marilyn.

Marilyn was just as obsessive about her career and her image. She knew the assets she had, she knew how to market them and she was not shy about doing what she had to do to get ahead. The marriage seemed doomed from the start considering their conflicting interests.

However, despite their divorce, there remained a connection between the two until Marilyn' death in 1962. In fact, Joe claimed that at the time of her death they were planning to remarry. After Marilyn died, DiMaggio convincingly showed that he was her one true friend making all the funeral plans and arrangements. He stayed true to her for the rest of his life by never remarrying and sending fresh roses to her gravesite twice every week until his death in 1999.

There has likely never been a more iconic female star than Marilyn Monroe nor a baseball hero that surpassed Joltin' Joe. It was a storybook romance but storybooks never deal with the failings, feelings and foibles of real human beings. Heymann shows how true that is in Joe and Marilyn, Legends in Love.

Reading this book about Marilyn Monroe reminded of this excerpt from a previous BeeLine post in which I wrote about the auction that had taken place back in 2012 where some of Marilyn's personal effects and wardrobe had been sold.

The conventional view of Marilyn on the silver screen was that she was a full figured woman. The facts and figures in the measurements of her wardrobe should put that myth to rest for good.

How did a numbers guys like me end up writing about Marilyn Monroe?

It is all about the data. That is the only thing that is of interest to me in any of this.

On the subject of data, I also came across these interesting facts about Marilyn Monroe recently.  A number of her personal effects and wardrobe were auctioned off in two separate auctions. One by her own estate and a second by the estate of Debbie Reynolds who had an extraordinary collection of Hollywood costumes of Marilyn and other stars.   These are summarized in this article from Bloomberg and this one from Slate.  The facts on Marilyn from the Bloomberg article.

We should never again hear anyone declare that Marilyn Monroe was a size 12, a size 14 or any other stand-in for full-figured, zaftig or plump. Fifteen thousand people have now seen dramatic evidence to the contrary. Monroe was, in fact, teeny-tiny.

The auction’s top-ticket item was Monroe’s famous white halter dress from “The Seven Year Itch,” the one that billowed up as the subway passed. It sold for almost $5.66 million (including the buyer’s premium) to an unknown phone bidder. Sharing a rotating mirrored platform with Hedy Lamar’s peacock gown from “Samson and Delilah” and Kim Novak’s rhinestone- fringed show dress from “Jeanne Eagels,” Monroe’s costume was displayed on a mannequin that had been carved down from a standard size 2 to accommodate the tiny waist. Even then, the zipper could not entirely close.

But that’s just one dress. Perhaps the star was having a skinny day. To check, you could look across the room and see that Monroe’s red-sequined show dress from “Gentlemen Prefer Blondes” was at least as petite, as were the saloon costume from “River of No Return” and the tropical “Heat Wave” outfit from “There’s No Business Like Show Business.”

In fact, the average waist measurement of the four Monroe dresses was a mere 22 inches, according to Lisa Urban, the Hollywood consultant who dressed the mannequins and took measurements for me. Even Monroe’s bust was a modest 34 inches.

That’s not an anecdote. That’s data.

The Slate article by Simon Doonan who inventoried and auctioned all of the clothes in her personal estate sale puts it all in perspective.

When you look at Marilyn on-screen and—armed with the information I have just provided—you realize that the busty, ample gal brimming over Tony Curtis in Some Like It Hot is literally one-third your size, you have every right to become suicidal. If she looks like that—zaftig, almost chubby—what on earth would you look like under similar circumstances?

Conventional wisdom says that the camera adds five pounds. After my Marilyn experience, I would say it’s more like 500 pounds.

On second thought, perhaps it is sometimes better not to be a facts guy.  Having no facts make life much easier.

That is especially true if we try to compare ourselves with Marilyn Monroe...or Joe DiMaggio.

For all that we might admire in them, they each had significant flaws. Like us, they were only human.