I have watched NFL football for 60 years.

I grew up watching the Cleveland Browns in the late 1950's on Sunday afternoons on a small black and white television in our knotty pine paneled den.

In those days the NFL only played 12 regular season games. There were no playoffs, wild card games or Super Bowl. The only post-season game was the Championship game between the Eastern and Western Conference (unless a tie in the conference standings necessitated a playoff as occurred in 1958 with the Browns losing to the New York Giants).

The players were also more evenly matched in size than they are today. A running back like Jim Brown who was 6'2', 230 pounds might be running behind an offensive line that averaged 6'3, 245 pounds and a defensive line that was about the same size.

Players today are bigger, stronger and faster and there is a wider distribution of sizes in the players. These all might be factors in what seems to be a higher rate of injuries than we used to see 50 years ago.

I recently came across this data visualization tool that Noah Veltman developed that shows the distribution of the heights and weights of NFL players since 1920.

Look at these NFL player sizes in 1920. There are many high school teams that have more size than this today. 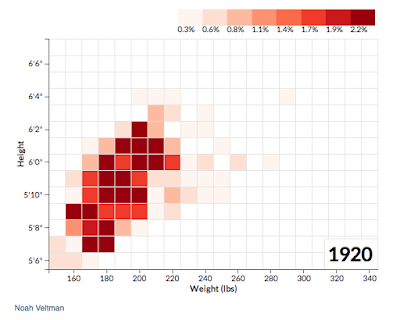 Here is a snapshot of NFL player sizes in 1960. Players over 6'5" and 280 pounds were practically non-existent. Notice also how there was a pretty concentrated core of players that were between 6'0 and 6'3" and 200 to 250 pounds 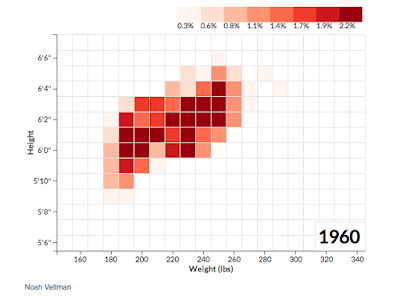 By 1980 you can see that players were getting taller but you still did not see 6'6'', 300 pound offensive linemen. You also begin to see a larger dispersion of heights and weights. Linemen and linebackers begin to get much bigger with most of the skill positions staying about the same. From that point until today the increased specialization in the sport has meant wider variations in the sizes of the players on the field. 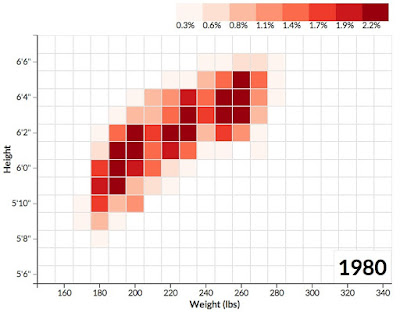 2014 was the last year that Veltman did the data analysis and by this time you can see there is a very wide dispersion in the sizes of players. In addition, there are a lot of players over 300 pounds with most of those being 6'3 or taller.

Of course, today a quarterback that is less than 6'3" is immediately suspect because of concerns they will not be able to see over their own offensive lineman or complete a pass over the outstretched arms of opposing rushers. 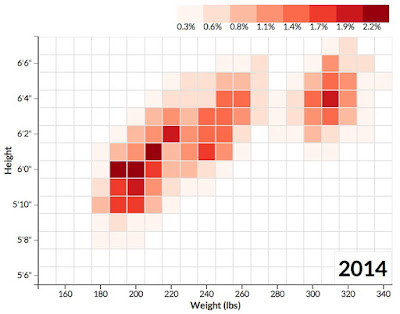 SB Nation also developed another interesting data visualization of the hometowns (rather than the college they attended) of all of the first round NFL draft picks over the last ten years. This gives a better view of where the top NFL talent is being born and bred. 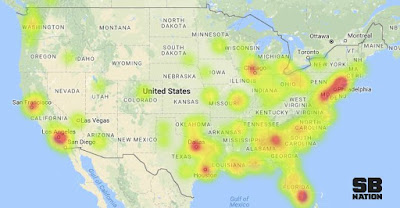 As you might expect, most of the talent comes from the large population centers in the country. There are only so many people blessed with the size, strength and speed with the potential to play in the NFL. You are simply more likely to find it where there is a larger pool of human beings.

The populations centers of metro NYC, Philadelphia and Baltimore/Washington shows up red hot on the heat map as do the metro areas around Miami, LA, San Francisco, Dallas, Houston, Atlanta and Chicago.

Here is a heat map close-up of the Southeastern United States. 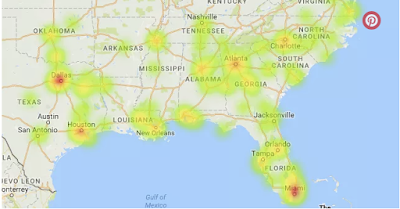 Over the last 10 years, Texas is home to more NFL first rounders (38) than any other state. California (35) and Florida (31) have been other fertile areas for top NFL draft talent.

However, interestingly in the 2017 draft, not one player who hailed from Florida was selected in the first round.

The state with the most first rounders in 2017?

My home state of Ohio with four.

The complete list of where the 2017 NFL first rounders hailed from.