President Trump will be meeting this weekend with Chinese President Xi Jinping in a summit at Trump's Mar-a-Lago estate in Palm Beach, Florida.

It promises to be an interesting few days considering that Trump consistently criticized China's business and trade practices during the campaign.

Let's look a little deeper at the trade between China and the United States.

Imports from China were practically non-existent 25 years ago. Today the United States is importing over $400 billion of goods per year from China. This is producing a $300+ billion annual trade deficit with that country.


This trade imbalance is the reason Trump has been so vocal in questioning the fairness of the trade and business practices of the Chinese relative to the United States.

A Chrysler Jeep Cherokee SRT8 costs $189,750 in China.  This is over 3 times what it costs in the United States. Why the difference?  China imposes import duties and taxes on the sale of the American-built SUV in their market

We hear all this talk about free trade but it often seems that it is a one-way street.  We provide a freeway into our market-the richest and most lucrative in the world-but we often see roadblocks are placed on our access to foreign markets.  How about free and fair trade? 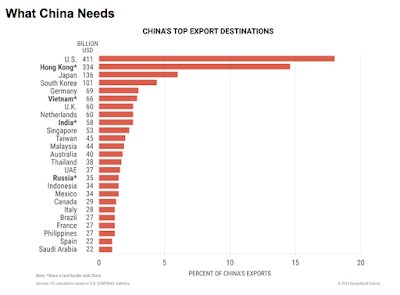 This chart  (click to enlarge) shows the level of imports from China by product category ordered by China's share of all imports of those products. For example, 90% of all umbrellas and sun umbrellas that are imported into the United States are from China. 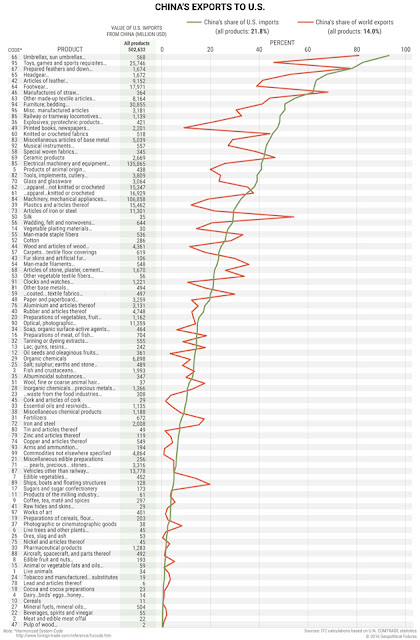 What is interesting in the chart is that the number of categories in which China is making up more than 40% of the share of imports for various products (Toys, games and sports (80%), Footwear (60%), Bedding (50%), Electrical machinery and equipment (40%).

It is also troubling to see that just two product categories (Electrical machinery equipment-$136 billion and Machinery, mechanical appliances-$107 billion) make up more than half of the total amount of Chinese imports. These are exactly the products that used to be made in the Rust Belt. Look no further than this statistic to better understand Trump's appeal in those states. Those voters know where their jobs went.

Of course, as President Trump was quick to say, China only bears a portion of the blame. The United States let it happen though poorly designed trade agreements and a tax system that was totally out of step with the rest of the world.

The United States has the richest, most lucrative market in the world but our policies essentially invite the rest of the world to access it with little or no cost. Most other countries apply some type of value-added tax or border tax on imports so that those products coming into the country bear some cost of supporting the market they are using.

Not the United States.

Consider an umbrella manufacturer in the United States. It pays its employees and also pays the employer share of FICA. It must pay for their unemployment insurance. Under Obamacare, it must provide healthcare. It pays property taxes on the plant property and personal property taxes on the equipment. It is subject to an immense number of regulations from the EPA to OSHA. Then, if there are any profits left, it must pay a corporate income tax.

What about the umbrella that was manufactured in China and imported to the United States?

It provides nothing. There is no contribution at all to pay for Social Security, Medicare, Medicaid, food stamps, schools or anything else, not to mention the defense security of the market that makes it such a stable, lucrative market.

The United States must reform its tax system with some type of border-adjustable tax system that will tax imports coming in so that they bear an appropriate cost to support our market. At the same time, exports from the United States should get a tax break just as is the case in the tax regimes of most of our trading partners.

That is what is required to level the playing field. I would expect to see some type of border-adjustable tax in President Trump's tax reform proposal later this year.

Retailers, who are probably the biggest beneficiaries of the current tax and trade regime, are already preparing a big fight. A group of the largest, including Best Buy, Macy's, Walgreen's and Wal-Mart, have launched a coalition called "Americans for Affordable Products" to resist any change in our tax laws that might make imports pay some tax costs in our system. 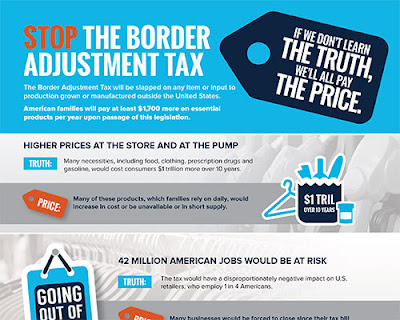 After all, as I have written before, quoting Daniel Kahneman,

"Reforms always create winners and losers, and the losers will always fight harder than the winners."

I am not sure the retailers and the others relying on imports are going to be able to fight and win this one in the end. However, it promises to be a real dog fight.

A border-adjustable of tax of just 10% has the potential to bring in $270 billion of new federal tax revenues that is not being captured anywhere currently in the system. That is a tremendous amount of money that could be used to offset other taxes in tax reform, provide export tax relief,  shore up Social Security or Medicare, pay for infrastructure spending or  ease the transition from Obamacare. Just a small slice of it could even pay for a border wall with Mexico.

The uses of this money are endless for a dealmaker like Donald Trump. That is why I will be shocked if this is not one of the major items in any tax reform package.

All of the companies who are funding "Americans for Affordable Products" must think this is where this is headed as well.

Made in China has grown across our land the last 25 years.

This weekend may mark the beginning of Made in the USA once again standing a fighting chance.
Posted by BeeLine at 9:53 PM