There are more real agents in Cincinnati than there are current real estate listings.

That is a factoid I picked up last week when I had lunch with a real estate agent friend.

I asked him why people were not listing their houses for sale as I had seen that low levels of real estate listings were the norm in a number of U.S. cities. For example, CNBC recently reported that the supply of homes for sale in the U.S. was the lowest it has been since 1999.

He shrugged his shoulders and said that a lot of people just seemed to be satisfied with where they are. They simply did not want to risk a change in their lives. 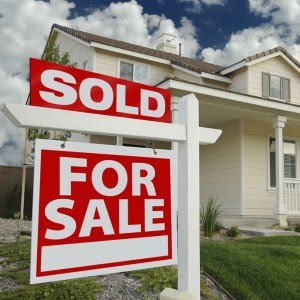 A couple of days later I came across this op-ed by Kyle Smith in The New York Post on "Why Americans have stopped moving" which delves into the issue in more detail.

Americans are stuck. Locked into our jobs, rooted where we live, frozen at our income levels. More than at any previous point in our history, we’ve stopped moving — whether moving up the income ladder or packing up a truck and finding another home. We’ve grown ossified, rigid.


Smith sees a bigger issue under the surface and suggests that something has changed in the American character and the American economy that seem to be reinforcing each other. Parts of the country are booming and parts are stagnant. Why the disconnect and why aren't people doing something about it?

It wasn't always like this. Americans have a long tradition of moving towards opportunity. Does anyone remember, "Go West, young man"? What about the thousands upon thousands of people who left Appalachia to work in the steel mills and manufacturing plants of the Midwest after World War II?  Grandparents like those of J.D. Vance who wrote Hillbilly Elegy.

...labor mobility is in a funk. Especially after WWII, millions of Americans with limited resources — southern blacks — moved hundreds of miles from home to take up industrial jobs in the north. At the peak, more than 30 percent of southern-born blacks moved north, from 1920 through the 1960s. Even when technological limitations made long-distance travel extremely onerous, in the late 19 century, we were willing to travel in search of opportunity. In the second half of the 1800s, more than two-thirds of US men over 30 had moved away from their hometowns, and more than a third of those moves were for more than 100 miles.

None of these explanations seem to explain anything by my way of thinking.

If all of this is true then why do we have so many immigrants flooding into the United States? They don't seem to be deterred by any of these factors. If they are willing to move across thousands of miles to seek opportunity in the United States how come Americans will not cross a state line?

Nowadays, moving from one state to another has dropped 51 percent from its average in the postwar years, and that number has been decreasing for more than 30 years. Black Americans, once especially adventurous, are now especially immobile. A survey of blacks born between 1952 and 1982 found that 69 percent had remained in the same county and 82 percent stayed in the same state where they were born.


Smith seems to have missed the most obvious explanation---America's social safety net.

The social safety net has become so large and all encompassing that it no longer provides protection--it has reached the point that it has trapped and ensnared millions of people. People don't move because they don't need to move. Their situation may be less than ideal but they have subsidized housing, they have food stamps, they have Medicaid. Millions gets a government check each month. There is no need to move.

People used to move because they needed to in order to put money in their pockets and a roof over their heads. They were willing to take a risk to better a bad situation. There are few situations anymore where Americans feel the pain of a bad situation like people used to. We have taken care of that by removing much of the discomfort. We have also destroyed people's incentive to do something about bettering their lives in the process. 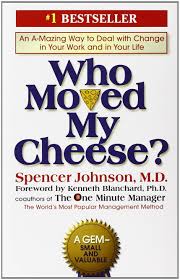 The book is about four characters who live in a maze and have grown accustomed to a nice, big piece of cheese that they live off of. Two are mice who are simple and instinctive and two are "little people" (named Hem and Haw) who represent the complexities of us as human beings. Hem and Haw even move their homes closer to the cheese to make it the center of their lives. However, the cheese gradually gets smaller and smaller until it is all gone.

The mice see the situation for what it is when the cheese is gone and immediately head out into the maze to search for another supply of cheese.

Hem and Haw eventually grow hungry and Haw tries to encourage Hem to join him in a search for new cheese. Hem is fearful of moving even though he is hungry. He won't move. Haw ventures out on his own. It is scary in the maze but Haw begins finding small chunks of cheese to sustain himself along the way. Eventually he finds a new supply of cheese that is bigger and more varied than he could have ever imagined. Of course, the two mice had found the new cheese long before Haw arrived.

The core lesson of "Who Moved My Cheese"is that change is inevitable in our lives and to live life to the fullest you have to embrace that reality. Change is scary but breaking through your fears sets you free. Those who continually seek security end up living in constant fear of losing it.

Human beings are naturally risk averse. Therefore, providing a steady supply of cheese actually works against our long term best interests. No pain almost certainly means no gain in the end when humans are involved.

Should you think that government "cheese" is our only problem in this regard, consider this additional factoid that came out this week from the U.S. Census Bureau.

More Americans aged 18-34 are living with their parents than with a spouse. 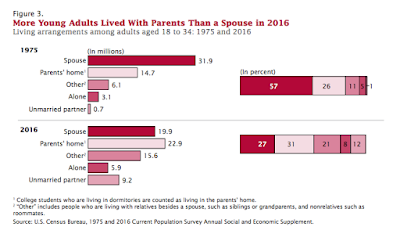 What do we seem to need to get America moving again?

A little less cheese---from government and parents---might be worth considering.

It is hard to say no when someone is in need. However, what is often needed is not a free lunch but the freedom to overcome their fears and move beyond them. For many, that is the only way you will ever get anyone to move.  Over 200 years of American history and the influx of millions of immigrants into the United States in recent years proves it.
Posted by BeeLine at 6:51 PM