Fair or Not? You Decide.

The income tax filing deadline is upon us and there are two things most people know for sure.

They are paying too much in taxes.

The "rich" are not paying enough.

A Gallup poll last April 15 found that 61% believed that the upper-income pay too little in taxes.

As you might expect, this view is skewed one way or the other if you are a liberal or conservative, Democrat or Republican. Interestingly, it is not as skewed along income lines as it is by political philosophy. 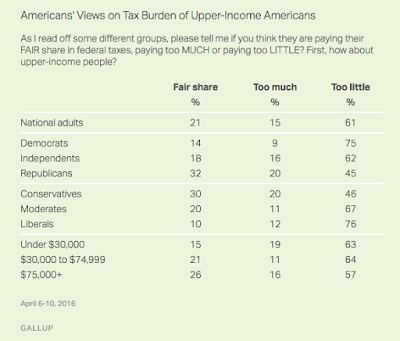 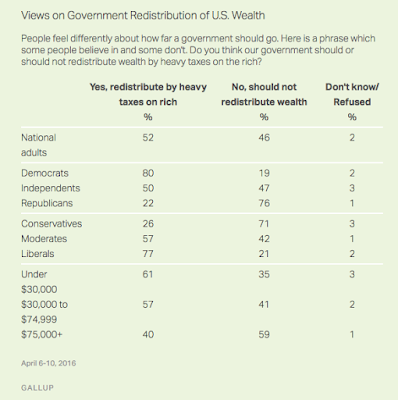 Another truth about taxes I have discovered over the years is that most people have no idea how heavy the tax burden is on the rich already. They also believe that the rich are using all sorts of loopholes to avoid paying their fair share. As a former tax attorney and CPA, I hate to tell them that most tax loopholes have been gone for over 30 years.

As we have seen from the quote above, "fairness" seems to exist in the eye of the beholder.

However, let's look at that question more objectively.

The information below is from the most recent Congressional Budget Office analysis on "The Distribution of Household Income and Federal Taxes" based on 2013 data. This data is categorized by income quintiles comparing before-tax incomes with the federal tax burden for each group. This analysis also breaks out the top 1% of income earners.

As you can see, the only group which is paying a higher share of taxes as compared to their share of income are the highest quintile of income earners---"the rich".

The lowest two quintiles are paying far smaller shares of tax compared to their incomes than those with higher incomes. In fact, the top 1% are paying 34% of their pre-tax income in taxes. The lowest quintile--- a mere 3%.

The amount of federal taxes paid as a percentage of pre-tax income by income quintile group is as follows.

It is also interesting to see where the components of pre-tax income come from for each quintile income group.


If you want to consider the current redistribution of income by the federal government, consider that 38% of before-tax income of the lowest quintile of income earners is in the form of government transfers (Social Security, Medicare, Welfare).

The so-called 1% could also get their name from the amount of their income they are getting in the form of similar government transfers---a mere 1%.

What is also interesting is the degree to which the middle class in the 3rd and 4th quintiles are reliant on income from labor to support themselves--about 2/3 of their household income comes from labor income. Only 2%-3% of their income is coming from capital income and gains.

On the other hand, the Top 1% derives only 35% of their income from labor. Almost 2/3 of their income comes from business income (23%) and capital income and gains 38%).

It really drives home the lesson my father taught me growing up when he would drive me to an area nearby to where we lived that had large, beautiful homes. He would say to me as we drove down the street, "The people who live in these homes don't do it on salary or wage, they have got people working for them or they have capital working for them." I never forgot what he told me and this graph shows that my father knew what he was talking about.

I don't know that I have ever seen a better graphic to show where the jobs come from that pay the labor income or the taxes that pay for the government transfers that the bottom 80% rely on to live on than what you see above.

Looking at this graphic, what do you think happens if a tax increase cuts into the income of the rich? Do you think it might have some impact on jobs and the labor income that ultimately sustains the masses? What about a tax cut for these people? Who would really benefit?

38% of the before-tax income of the poorest 1/5 of Americans is already being paid by the rich and 34% of the next quintile by redistribution by the federal government.

If we want to just look at the federal tax burden compared to income with regard to federal individual income taxes alone, the numbers are even more stark. This is the most recent IRS data from the 2014 tax year compiled by The Tax Foundation. 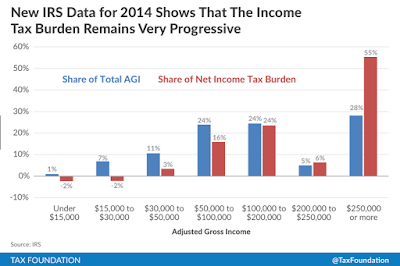 Consider the fact that those with adjusted gross incomes of less than $100,000 account for 43% of all the income reported on U.S. individual tax returns. However, these taxpayers only shouldered 15% of the total federal income tax burden.

Those making $100,000 or more accounted for 57% of all income but paid 85% of all federal individual income taxes.

I am not happy with what I pay in taxes.

However, I am just happy there is a guy or gal behind the tree that is paying even more than me.

This is a day to be thankful for every last one of them.

Some historical perspective on the differences today compared to 104 years ago when the individual income tax was first implemented.