When we look at the political views of younger voters it follows that a lot of what they believe is the result of an educational system that is decidedly biased and one-sided.

Students are given a steady diet of liberal orthodoxy in which there is little interest in providing exposure to a diversity of viewpoints and open and free discussion.

I saw this early in my own children's education.

I went to my daughter's parochial elementary school one day when she was in the first or second grade and as I walked down the hall I came across a gigantic poster with the picture of a nuclear submarine and something like the following as a headline.


I could not believe my eyes. It was blatant leftist propaganda directed at Ronald Reagan's defense build-up in the mid-1980's on the wall of an elementary school.

It was not long after that I was called by a friend to contribute money to a capital fundraising campaign for the school. I mentioned what I had seen to my friend and stated I was more than willing to make a pledge but not if the walls of the new school were being used for posters like that.

A few nights later the parish priest was in my family room accepting my check and stating that it would never happen again. He was an honorable man. I believed him but I am not certain that he was patrolling the halls of the school every week thereafter.

A few years later my son was in a public middle school and came home stating that his homework assignment was to write our Congressman asking that he vote for a constitutional amendment to abolish the electoral college. I wrote about this previously in a blog post titled "Electoral College Elucidation".

His teacher had taken it upon herself to have the entire class take this project on as a way to "teach" them about the U.S. Constitution. Needless to say, this was not teaching. It was her attempt to indoctrinate her students with her point of view. I was not pleased and I sent a note back to her telling her that my son would not participate in the assignment. In my view, the electoral college was just fine. After all, our country is called "The United States of America" for a reason.

These are small examples but I think it makes the larger point on how the educational system is often not so much trying to educate students to think for themselves but desires to indoctrinate students into a certain way of thinking.

Students are not provided history and context in much of what they "learn" and they most certainly are not exposed to the logic behind most conservative view points.

Consider again the results in the recent YouGov survey that I referenced in my last blog post in which 58% of Millennials stated they would prefer to live in a socialist, communist or fascist country. 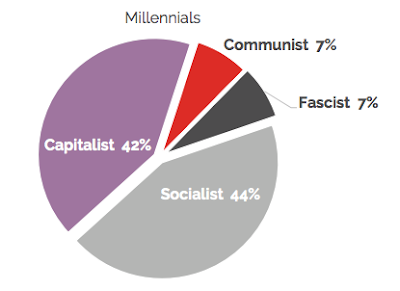 Looking deeper at the survey shows that part of the problem is that many Millennials simply do not really know what socialism, communism and fascism actually is. They apparently do not know the history of the hunger and horrors that have befallen those countries that have adopted the most extreme examples of these systems.

For example, millions and millions of people in Venezuela are literally starving to death under the current regime of Nicolas Maduro and his United Socialist Party of Venezuela.

61% of Millennials are totally unfamiliar with his name. 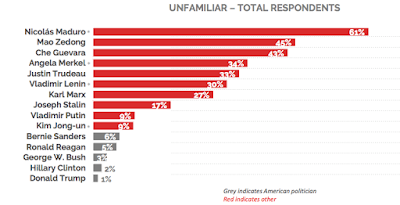 More shocking is the survey result that shows that only 44% of Millennials would be insulted if someone called them a "Communist". Compare that to the 77% of Boomers (their parents) and 79% of Matures (their grandparents) who would take offense at that word.

Where do the Millennials get these ideas? It doesn't appear they got them at home from Mom and Dad.

It is also interesting that the Gen Z generation (the demographic cohort right after the Millennials) do not have such extreme views. Why is that? Could it be that the liberal indoctrination process is not yet complete as many in this generation are still in school?

Where is the liberal orthodoxy pushed the hardest in education?

On university and college campuses.

It has become increasingly clear that on many college campuses today there is only one accepted orthodox view of what political ideas and views are "right". This then determines what books are read, what speakers are heard and what ideas are considered in an undergraduate's education. Anything outside of that political culture is ignored, ridiculed or banned outright.

It is the antithesis of what a college education should be about. Colleges should be about fostering a politically "heterodox" culture that exposes students to a range of views, idea, theories, books and speakers.

How does one find a college like that in this day and age?

The Heterodox Academy has a mission "to improve the quality of research and education in universities by increasing viewpoint diversity, mutual understanding, and constructive disagreement."

A friend and BeeLine reader recently made me aware of this organization and its "Guide to Colleges" which ranks the top national universities and liberal arts schools on which schools are best for students seeking exposure to diverse perspectives.

Who is at the bottom of the rankings for national universities? The University of Oregon is dead last with Northwestern University one notch up. It is probably no coincidence that many mainstream journalists are alums of Northwestern.

Williams College in Massachusetts is at the bottom of the liberal arts rankings with Wesleyan University one rank up.

If you would like to send your child to a college that is more interested in educating them than in brainwashing them, you might consider reviewing the Heterodox Academy rankings.

As a parent, you might also take more responsibility in learning what your child is being taught (and not taught) in school. Insure that they are getting a complete education rather one than a biased one. Make sure that they understand the values and virtues of capitalism, property rights and free enterprise.

Academics fervently believe in the theory of socialism or communism but there is not one example in the annals of human history where it has proven to work for the populace at large over the long term.

I have seen it over and over in my lifetime. You can take the same people and place them in different economic and political systems and see the real results. Capitalism and freedom always win. It should not even be debatable.

Cuba and Venezuela as they used to be vs. how they are today.

If you are a student, stay away from Brainwashed U and start thinking freely (and reading BeeLine regularly).