At their core, most people detest political drama. They don't like bickering, backbiting and blabbering. Give them something calming rather than chaotic. A steady diet of drama takes a toll on voters. It wears people out. Their natural reaction is to react negatively to it.

Political drama that is amplified by a constant drumbeat by the media makes it even worse. The drumbeat of repetition engages the "illusory truth effect" in humans. Simply stated, the more often we hear something the more likely we are to believe that it is true---even if it is a complete fabrication.

One of the key principles in any successful attempt to influence is lots of repetition by repeating your points over and over again to engage the "illusory truth effect".

It is also easier to influence people within a group rather than as individuals. Most people look to others for cues to their behavior. Most people are conformists within a crowd. It is hard to go against the flow.

Gustave LeBon was a French doctor and social psychologist who was one of the first to study and publish theories on the psychology of crowds in the late 19th century. Adolph Hitler actually studied LeBon's work and used it to craft much of his propaganda. 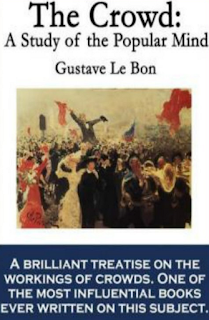 Brainblogger.com explains how the psychology of crowds can be used to influence individuals within the crowd.

Le Bon posited that once individuals came together to form a group, the individual’s will was surrendered to what was perceived to be the will of the group. Their faculties of reasoning were impaired or destroyed, and they entered into a more suggestible state. The larger the group, the easier it was to coerce.

This is a big reason why the drumbeats of the mainstream media are so dangerous. They have access to enormous audiences  and they have the ability to repeat their points over and over and over again.

Drama and the drumbeats that follow are the biggest risk that Donald Trump faces in his Presidency. Make no mistake, most of the drama is created by Trump himself. If I was advising him I would do everything I could to try to get him to reduce the drama for the reasons stated above.

However, the drama pales in comparison to the drumbeats that follow. That is far more damaging in the long term. The constant drumbeat from the media that amplifies anything and everything about Trump will undoubtedly take a toll the longer it persists. And it looks like it will persist forever.

Mother Theresa herself could not withstand the type of barrage Trump has taken from the media and the political establishment. It is unremitting and it is unprecedented in its vitriol.

It could be that Trump believes that the only way to try to disrupt the drumbeats is to stay on the offensive, keep moving the target and create more drama. However, he may be missing the bigger point on propaganda. This was also used by Hitler---keep the dogma simple, make only one or two points. The reality is that the drama around Trump  feeds the singular dogma of the message the media and the left are promoting to us---Donald Trump is unfit to be President.

You can expect the media to continue to pursue this narrative and continue the drumbeats---over and over and over again. They will use every opportunity to make Trump look uniformed, uncouth and -most importantly-unfit for the Presidency. Their objective is to play to the psychology of the crowds. Make it so that individuals who voted for Trump will feel more and more uncomfortable when faced with what appears to be the obvious fact that everyone else is opposed to him. 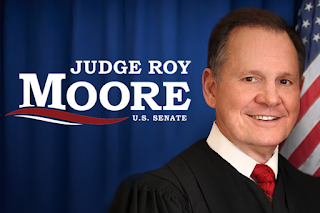 I have no idea if Roy Moore is guilty of his alleged conduct with teenage girls 40 years ago or not. However, what is obvious is that the Republican establishment and the Democrats want you to believe it. They have latched on to a dramatic narrative and the drumbeats are strong and unrelenting against Moore. It is hard to not assume his wrongdoing when the crowd is beating the drum so loudly.

I have been well aware of the psychology of crowds since I was a teenager. I am susceptible to the pull as much as any human being. However, I have learned over the years to pull back and use my own reasoning, values and consideration of the motivation of those leading the narrative rather than blindly following the drumbeats.

I cautioned my children when they were growing up to understand that most human beings, if left to our own base instincts, are actually like sheep. Most will follow the crowd wherever it may lead them. I made it clear to my kids they needed to think for themselves and forget about what the crowd was doing.


A perfect example of crowd psychology is the Duke lacrosse case of a decade ago. In the days after that story broke you could not break through the drumbeats. The media, their fellow students, their professors and the Duke administration all jumped on the bandwagon against the lacrosse team. I wrote about the case here on why I was not on that bandwagon. It was not easy, especially when the D.A. was so adamant in proclaiming their guilt. We know today it was all a lie.

As I stated above, I don't know whether Roy Moore was a predator of young, innocent girls or not.

All I know is that there is no middle ground or gray area left for Moore from here on out.

He will either be vindicated or he will be forced from the race (or be defeated) in humiliation.

The most damning accusation against Moore involves a woman who claims she used to be a waitress in a restaurant that Moore frequented back in 1977. Moore has responded that he never knew the woman. He went even further and stated he did not even know where the restaurant is that his accuser is talking about.

That is pretty black and white. That does not leave much gray area, does it?

How do I analyze this rationally and not get swept in the crowd?

2. The critical piece of corroborating evidence that the woman has to prove that there was some type of relationship between her and Moore is an inscription in her high school yearbook from 1977. Below is an image of that inscription that an internet sleuth, Thomas Wictor, pulled from the CNN coverage of the press conference in which the woman accused Moore of sexually assaulting her in his car. 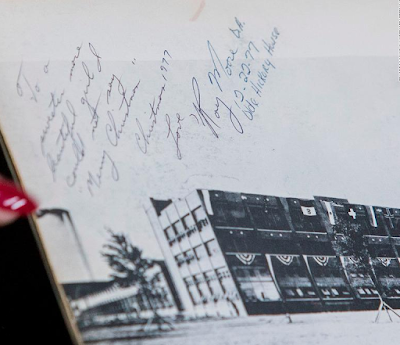 Do you notice anything about the inscription?

Why are there two different pen inks in the inscription?

It could be the lighting or the angle that the image is being held at.

It could be the first pen stopped working but you don't see any evidence of that in the prior writing.

It could also be that another Roy, or even a Ray or Kay signed the book, and she used it to frame Moore.

If you doubt there is forgery involved, look at the capital M in "Merry" and the "M" in Moore. Those were clearly not written by the same person.

In addition, compare an actual signature of Roy Moore with what you see above. The signature below is from a 2017 fundraising letter from Moore. Granted, signatures can change somewhat over that period of time. I am not a handwriting expert but it does raise questions in mind that need further investigation. 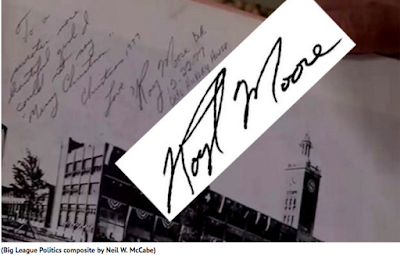 It seems even more obvious that the printed letters (non-cursive) are distinctly different. Compare Roy Moore's printing on this campaign document with the printing in the yearbook. In particular, the compare the small "e" in each. They are totally different. This photo was also supplied in research done by Thomas Wictor.

3. Another thing that does not seem to add up is the narrative that Moore has a thing for young, innocent girls. However, there is nothing yet to surface on this in the intervening decades. In fact, Moore ended up marrying a 24-year old divorcee with a young daughter 35 years ago. This does not seem to fit the narrative nor the behavior pattern of male sexual predators. They do usually change their stripes with time. The same patterns persist.

4. One final thing to know about Roy Moore is that he has never been one to go along to get along. He is the exact opposite of a crowd follower. He was that way as young officer in Vietnam after graduating from West Point. He was that way as a county prosecutor he convened a grand jury  to investigate underfunding of the sheriff's office. He was that way when he defiantly place the Ten Commandments up in his courtroom. He earned a lot of enemies along the way in the political establishment.

5. All I can make of this is that either Moore has been elaborately framed to remove him from the Senate race or Moore has found himself backed so far into a corner that he is laying it all on the line with outright lies to try to save himself.

From my vantage point it appears that both sides in this may have overplayed their hand.

Truth in these cases is often murky and most times filled with half-truths.

Both sides may have taken half-truths and are trying to make it the whole truth.

If Roy Moore can show that there is any forgery in that yearbook inscription it is going to discredit much of the serious allegations against him. It will make everything look like a targeted witch hunt. He may even be guilty but that fact will be lost because someone tried to build a false case on him. The real losers will be women who have legitimate stories.

If the yearbook inscription holds up, or other compelling evidence surfaces that undermines Moore's denials, he is toast---and that includes a picture of him surfacing that shows him eating at the Olde Hickory House.

The lesson in all of this?

Pay attention to drama and drumbeats.

They are dangerous to politicians.

They are also dangerous to us if we follow the crowd and don't think for ourselves.

Beware the madness of crowds.
Posted by BeeLine at 7:41 PM