News coverage is dominated by reports of Russian collusion.

Last week it was the news that the Clinton campaign and the Democratic National Committee funded the infamous Trump Dossier in which a British intelligence agent was tasked with getting dirt on Trump from sources within the Russian government. We also got more background about what was going on behind the scenes in 2009 and 2010 as the U.S. government was determining whether it would permit the sale of 20% of our country's uranium reserves to Russia.

This week the news is centered on the indictment of Paul Manafort who was the campaign manager for Trump for about four months last Spring and Summer. However, the indictment of Manafort has nothing to do with his actions with the campaign. It all revolves around his representation of the Russian- backed Ukraine government and some of its politicians in the years 2006-2015.

In this post I am not going to get into directly judging the guilt or innocence of any of these players. There are clearly a lot of facts I don't know. Quite frankly, there seems to be a lot of facts that nobody knows right now.

I am going to confine my thoughts to what is known about the money that was circulating in these cases. It is rather astounding. It should also be a cautionary tale as to why it is dangerous for foreign interests to be involved in American politics. Make no mistake, it is most often money---currency--- that is the catalyst for any collusion that would be inimical to the interests of the United States of America.

I first became aware of Manafort when Ronald Reagan was elected in 1980. He was a high profile political and campaign advisor with his partners Charlie Black and Roger Stone.

They leveraged their campaign and political contacts and established a lobbying firm shortly after Reagan was elected.

Over the years it became lucrative for U.S. political advisors and lobbyists to peddle their expertise and contacts to foreign politicians (and ultimately foreign governments).

Manafort was no exception. Over the years it has been reported that he worked for a number of foreign interests including those in the Phillipines, Angola, Pakistan, Zaire and Nigeria.

In the past year it was reported in the court filings that Manafort had travelled to Dubai, Cancun, Panama City, Havana, Shanghai, Madrid, Tokyo and Grand Cayman Island. This seems to have been disclosed to determine the extent Manafort could be a flight risk.

What has led to Manafort's indictment involves his work with the government of Ukraine and its former President Victor Yanukovych for the years 2006-2015.

The indictment alleges that Manafort violated U.S. laws by not registering as an agent of these foreign interests and in conspiring to hide the payments for this work by a maze of offshore companies and bank accounts through which he laundered the money.

How much money was involved?  The indictment states that Manafort and his partner "generated tens of millions of dollars as a result of their Ukraine work."

The indictment alleges that Manafort would get paid for his work which was then deposited to one of 15 various offshore companies with a foreign bank account (most of which were in Cyprus). He would then use funds from these accounts to directly pay for his personal expenses in the United States. It is alleged that this was also done to evade federal income taxes.

The FBI details all of this spending in the indictment. It makes for interesting reading in considering the amount of money that Manafort was spending and the profligate manner in which it was spent. It also puts into better context just how profitable this foreign influence money is.

For example, Manafort paid one home improvement company in the Hamptons, NY $5.4 million over the course of seven years for work on a house he has on Long Island.

This is an aerial view of that property in Water Mill, NY.


It is interesting to note that Manafort appears to have his own short par 3 golf hole on the property.

That might explain some of these expenses as it is detailed in the indictment. 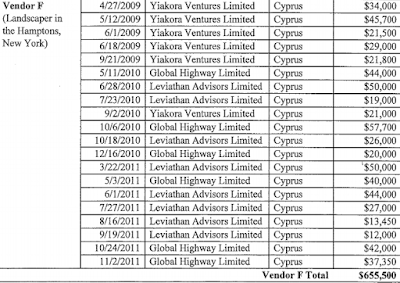 Talk about overhead. He was paying about $200,000 per year on his landscaping. Those are green fees that I am not familiar with.

Manafort paid another landscaper $165,000 over the next two years. Did he find a better deal for someone to cut his grass?

Of course, when it is raining outside, or when it gets dark, you may need other entertainment choices other than the pool, tennis or golf.

This is what Manafort paid to a vendor for audio and video systems at his Long Island house.

It must be a pretty rudimentary system because he paid $1.3 million for similar work at his Florida home!

Manfort is also alleged to have purchased four Range Rovers, a Mercedes, two brownstones in New York City and his principal home in Alexandria, Virginia with another $7 million or so of laundered money.

Of course, Paul Manafort is a minor leaguer when it comes to collusion currency regarding foreign influence compared to some others.

Bill and Hillary Clinton perfected how to do that a long time ago.

For example, look at this graph from The Washington Post that details the annual contributions that came into the Clinton Foundation and related entities between 2001-2013. 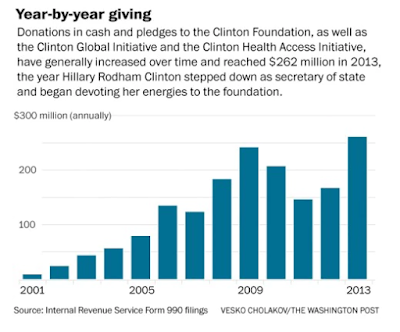 The Post "charitably" suggests that contributions increased when Hillary stepped down to devote "her energies to the foundation". The only problem with that narrative is that the only thing her energies were devoted to beginning in 2013 was to be elected President of the United States.

The fact is that a lot of the big money "given " to the Clintons was coming from foreign interests.


Does anyone really believe that these contributions were provided as a way to pay tribute to former President Bill Clinton and the great philanthropic work the Clinton Foundations was doing?  If that was the case, why were the contributions so skimpy immediately after Bill left office in the 2001-2005 period.

When did they take off? In 2006, when it was clear that Hillary was running for President in 2008 and it continued during her Secretary of State tenure and her 2016 run.

Notice also that spike in contributions in 2009 and 2010. That is exactly the period of time that the sale of 20% of U.S. uranium reserves were under review by the U.S. government in the so-called "Uranium One" transaction.

We learned last week through reporting in The Hill by John Solomon and Allison Spann that the FBI had a confidential informant on the inside working with the Russians at the time the Uranium One transaction was being reviewed by the Obama administration.

What did the FBI find out from that informant?

They also obtained an eyewitness account — backed by documents — indicating Russian nuclear officials had routed millions of dollars to the U.S. designed to benefit former President Bill Clinton’s charitable foundation during the time Secretary of State Hillary Clinton served on a government body that provided a favorable decision to Moscow, sources told The Hill.


How many millions went to the Clinton Foundation in 2009 and 2010 when the Committee on Foreign Investment in the United States (CFIUS) (which Hillary sat on in her role as Secretary of State) was deliberating whether to approve this sale to the Russians?

From The National Review.

Before, during, and after CFIUS’s deliberations, nine Uranium One investors gave the Clinton Foundation some $145 million. Ultimately, CFIUS approved the Kremlin’s transaction, on October 23, 2010.


As I stated at the top, let's put aside whether any of this is criminal or not under federal statutes today.

Millions and millions of dollars of currency. Currency that is not spent for purposes that necessarily involve the best interests of the United States of America.

Perhaps that is why George Washington said this in his Farewell Address upon leaving office.

The great rule of conduct for us in regard to foreign nations is, in extending our commercial relations to have with them as little political connection as possible.


Washington was also not fond of the political party framework. Recall that he was not a member of any political party and hoped that American politics could steer clear of a party system.

His comments on where a party system in the United States would lead certainly seems prescient today whether a Democrat like Clinton or a Republican like Manafort is involved. Did their interests involving  money outweigh their responsibility as an American?

Without looking forward to an extremity of this kind (which nevertheless ought not to be entirely out of sight), the common and continual mischiefs of the spirit of party are sufficient to make it the interest and duty of a wise people to discourage and restrain it.

It serves always to distract the public councils and enfeeble the public administration. It agitates the community with ill-founded jealousies and false alarms, kindles the animosity of one part against another, foments occasionally riot and insurrection. It opens the door to foreign influence and corruption, which finds a facilitated access to the government itself through the channels of party passions. Thus the policy and the will of one country are subjected to the policy and will of another. (emphasis added).


I could not say it better myself.

Why are the answers to almost every problem addressed by our Founding Fathers?