Predictions As Bad As The Polls

Leading up to last November's election almost every poll predicted that Donald Trump had no chance to be elected President of the United States.

It is a year later and those predictions have been proven to be as accurate as the polls.

Let's look at a few facts. 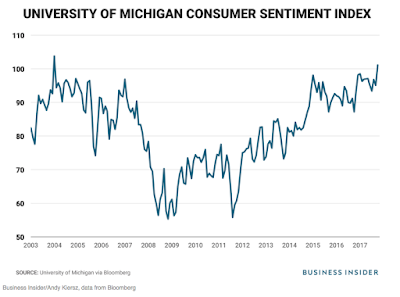 You will notice that it spiked immediately after Trump was elected President after trending down for the previous two years.

Of course, the stock market has set record upon record since Trump was elected despite the doomsday predictions of economists like Paul Krugman and finance expert Steve Rattner.

The Dow Jones Industrial Average was up 24.3% in the one year after Trump's election last November.


We were told that by the New York City Tourism Agency that Trump's proposed "travel ban and related rhetoric" would mean 300,000 less visitors to New York City this year. Foreign tourism in New York City is currently on target to increase 3.6% this year.

We were also told that the Trump administration's decision to reduce outreach advertising on Obamacare by 90% would mean enrollment would drop by at least 1.1 million compared to last year. Enrollment for the first week actually increased 179% over the same period last year. We will see how enrollment progresses over the remainder of the open enrollment period but a smaller ad budget is apparently not a problem.

We were also told that Trump would start a trade war if he tried to pull out of NAFTA. Both Canada and Mexico have indicated they are open to renegotiating the treaty and are currently at the negotiating table.

We were also told that Trump would blatantly ignore the rule of law. In fact, Trump has been the only President in 30 years that is actually working to enforce the immigration laws that are on the books and have been blatantly ignored by the last four Presidents.

Trump even has scrupulously followed the law even when lower court judges came up with unprecedented legal theories to strike down his executive "travel ban" orders. Trump pulled back on let the justice system to work. In the end, Trump largely prevailed on the travel ban when the cases got to the Supreme Court.

A year does not make a Presidency but the predictions about President Trump have thus far been as bad as the polls.

Trump, like most Presidents, is going to be measured in large part by how the economy performs.

His first year has been impressive in that regard but the United States has not had a recession in over 8 years. If we avoid going into recession over the next six months we will have had the longest period without a recession since 1850.

It would be an understatement to say that this economy is living on borrowed time. That is one of the reasons that the tax bill before Congress is so important to both Trump and the Republicans. They cannot afford for business and consumer confidence to be shaken. It will if the tax bill does not pass.

You have to also ask how much longer it will be without some sort of stock market correction. It also seems to be living on borrowed time.

Trump's approval rating is currently at 44% according to Rasmussen. More troubling for him is that 45% strongly disapprove of him. People who have strong opinions usually do not sit idly by. They do not keep their opinions to themselves and they vote.

However, Ronald Reagan had a similar approval rating at the same point in his first term. He won re-election by carrying 49 states. 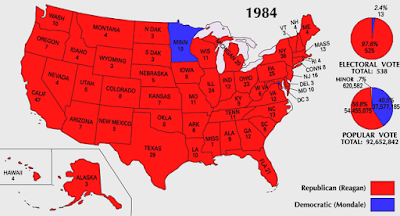 Trump's problem is that the current economic expansion is living on borrowed time while Reagan was in the first stages of turning around the malaise of the Carter years.

Trump built a real estate fortune on borrowed money. Can his political fortunes go as well living on borrowed time? A standard prediction would say no. However, as I wrote last October right after the Access Hollywood tape was released, I have learned to "Never Say Never With Trump".