Ronald Reagan said that "freedom is never more than one generation aways from extinction."

We didn’t pass it on to our children in the bloodstream. It must be fought for, protected, and handed on for them to do the same, or one day we will spend our sunset years telling our children and our children's children what it was once like in the United States where men were free.


The same can be said about religion.

The values, virtues and vitality from having religion in our lives does not get there through the bloodsteam. It is passed on and nurtured in us.

The United States of America was founded on Judeo-Christian values by men and women that had a deep and abiding faith in God. Many of those who set out for the American colonies had been persecuted or ostracized for their religious beliefs.

When our Constitution was written it was evident how the lesson of being free to practice your religion was ingrained in our forefathers by their parents, grandparents and their great-grandparents before them.

It is right there in the Bill of Rights to the U.S. Constitution. It is also interesting to note that it is the first item mentioned in the First Amendment---it is before the freedom of speech, the right to peaceably assemble and the right to petition the government for redress of our grievances.

Congress shall make no law respecting an establishment of religion, or prohibiting the free exercise thereof; or abridging the freedom of speech, or of the press; or the right of the people peaceably to assemble, and to petition the Government for a redress of grievances.


Keeping all of this mind, I thought it was interesting to see the latest Pew Research Center survey on the age structure and median age of U.S. religious groups. 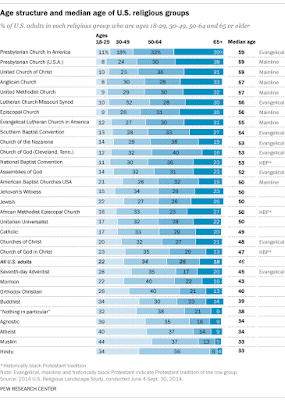 If we are one generation away from extinction on almost anything that does not flow naturally through our veins, this survey ought to provide a sobering perspective for many people of faith.

What are the five "religious groups" with the lowest median ages?

What are the "religious groups" with the highest median ages?

Interestingly, these were all among the religious groups who were the most prevalent in the American colonies.

The only major sect that is not on the list from that era is the Quakers (Friends Church). The Quakers founded Pennsylvania. This blog post cites a statistic that at one time one-third of the American colonies were made up of Quakers. Today they are "statistically insignificant" as the Pew Study demonstrates.

The title of that blog post? "Are Quakers Going Extinct?"

How many things that are important in your life are "one generation away from extinction?"

On the subject of freedom, this recent YouGov poll is of concern for the future of freedom when you consider the answers by Millennials as to what is their "preferred country to live in"?

58% would prefer to live in a Socialist, Communist or Fascist country compared to the country built on capitalism that they now live in? 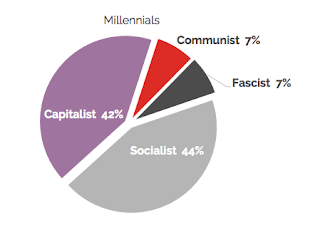 They don't seem to understand that almost all those things they love the most---iPhones, Facebook, Instagram, Starbucks, Amazon Prime and craft beer---are products of capitalism.

Keep in mind that this generation is one generation away from running the United States of America!

Be passionate about those things that are important to you and need to be perpetuated... and pass it on!

You can't expect anyone else to do it.