Throughout almost all of our history, if you graphed the population of the world by age it would look like a pyramid. A very large base with a lot of young people that tapered down with each succeeding age group as it got older.

For example, here is what the age distribution of the world looked like in 1950. 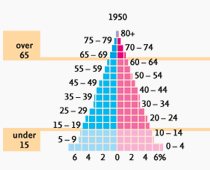 This is how it looks like today. (All charts below are from PopulationPyramid.net)


Over the last two generations the world population base has gotten smaller due to lower birth rates and the top has gotten wider due to longer life expectancies.

However, the big picture does not reveal even bigger demographic trends in individual countries. It is these trends that will predict a lot of what is to come in the world over the next 50 years. After all, "demography is destiny".

Here is the population pyramid for the United States. It looks more like a skyscraper than a pyramid.

Who is going to pay all of those Social Security and Medicare benefits in the future?

Of course, the United States is nothing compared to Japan. It looks as if it may soon tip over.  Japan actually has more females aged 80-84 than any age cohort age 24 and younger.


If you want a reason that Angela Merkel has gambled on her risky policy to allow millions of Muslim refugees into Germany look at this graph. Germany needs young workers and taxpayers. Time will only tell if she sacrificed her country's heritage and culture to do it.

Germany and Italy both look like fire hydrants rather than pyramids. It seems an apt description as both countries are facing demographic self immolation.

China has a similar problem due to its one child policy that was in place from 1979-2015. That has also resulted in a unique imbalance in males greatly outnumbering females in the population.


There are 37 million more males than females in China under the age of 30. To put that in context, that is about the same number of total females that are age 19 or under in the entire United States.

This is a serious issue that likely has never been faced in this magnitude in mankind's existence. There have been times in the past that women of marrying age greatly outnumbered the men in a country or region (e.g. Russia after World War II, the Southern states after the Civil War) but I don't think we have ever seen the reverse with this large of a population group. I wrote about the potential ramifications of this issue here five years ago.

Speaking of Russia, they actually have the opposite problem of China. Females vastly outnumber males in the older age groups. Notice how lopsided the top half of the chart below is? It it tilting to the right (red).

In addition, look at the male population between ages 10-24. Where does Russia draw soldiers from for the future Russian military? Pretty slim pickings if you ask me.

There are still countries where the traditional population pyramid is in force. This undoubtedly may bring its own set of problems looking to the future.


Most of us probably don't think of Nigeria as a large country. It actually has 192 million people. That is 50 million more than Russia. By comparison, there are 326 million in the USA.

However, Nigeria has 84 million children 14 years and under. The United States only has 61 million in this age group.

If we are concerned about how we can feed, sustain and educate 61 million children in the U.S., how is it going to be done in Nigeria?

And how do all of those 84 million children become gainfully employed in the future?

No country has a better balance of population and no other country has the governmental and economic systems to insure that these human resources reach their full potential.

If demography is destiny, these charts demonstrate that there is no country on earth that has better prospects for future possibilities than the United States of America.