It came out pretty much as I expected as I wrote earlier this week in "The Road To Tax Reform."

Is it perfect? No. Is it an improvement on the current system? Yes.

My overall grade? A "B" for better.

Revising the Internal Revenue Code is always risky business. There are so many special interests provisions that have been incorporated into the system that any attempt to deal with these is guaranteed to bring howls and hysteria from somebody.

You also have the reality that if you want to lower rates and make things simpler (goals that almost everybody agrees with but for a committed leftist ) you have to get rid of some deductions or tax benefits in order to not bust the budget.

It is a balancing act. What do you trim away from some to provide a tax cut for many more?

The politics are also a balancing act. There are many things that would be nice to do from a tax policy standpoint that just cannot be done politically.

For example, this guy is complaining because there will be no tax rate reduction in the bill for those with joint incomes over $1 million. He said everyone was promised a tax cut during the campaign. 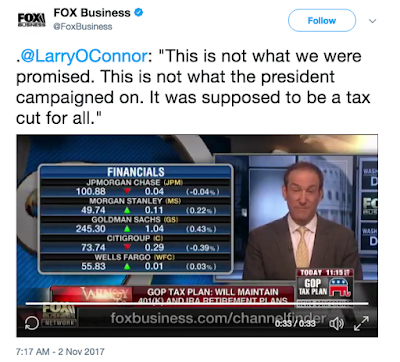 I think he is a little short-sighted in his criticism.

First, I think President Trump spoke primarily about a "middle class" tax cut during the campaign.

Second, there are benefits in here for higher income taxpayers in the estate tax, a lower business tax rate, asset expensing and the like. A rate cut is not everything.

I don't disagree with his sentiments that it is not the best tax policy to have the government further skewing the tax distribution tables and picking winners and losers. However, the politics demanded this.

If the GOP had cut the tax rates for millionaires the Democrats would have demagogued this bill to death. All we would have heard is that this is nothing but a tax cut for the rich.

It might have endangered the entire bill in the end.

We will still hear the same refrain about the rich from the Democrats. That you can count on. I explained that in my last post. The fact is that they are paying most of the taxes. It is hard to do any tax cut and not touch the rich in some way.

However, leaving the top rate unchanged for those millionaires gives the GOP a talking point in response.

"What are you talking about?". We left the tax rate unchanged for millionaires." "The only tax rate cuts are for those making less than that."

The bill also generally repeals the deduction for state and local taxes. I wrote about why this made sense in my last blog post on this subject. This deduction is particularly valuable for high income earners so repealing this made the most sense to tilt tax savings in the bill away from the rich.

As I predicted, an exemption was made to allow taxpayers to deduct up to $10,000 in property taxes per year.

The home mortgage interest deduction was also trimmed. It will only be allowable on the first $500,000 of mortgage debt on homes purchased in the future. Those who have larger mortgages right now will be grandfathered to allow the deduction to continue for their current house.

Both of these carve-outs will help the middle class.

I generally like what the House tried to do in streamlining and simplifying the tax law. They also are proposing to repeal the medical deduction, the deduction for personal casualty losses and deduction for employee business expenses. These deductions added a lot of complexity to the tax return and also required the deduction to be above a percentage of AGI so they were beneficial to a relatively few number of taxpayers.

This lined copy from Forbes shows current law as adjusted for the proposed changes to itemized deductions in the House bill.

Seven tax brackets are being reduced to four.

This chart shows the comparison of old and new rates for a married couple filing jointly.

You can see from the chart that up to $260,000 in joint income it is probably a pretty good bet that most people will benefit. Above that level it is going to depend more on what the trade-offs are on the lost itemized deductions. However, it needs to be remembered that this bill also greatly increases the standard deduction. This alone is projected to mean that 27 million taxpayers will no longer have to itemize their deductions. They will do better with the standard  deduction. This will also result in an enormous simplification of the tax return filing system for many taxpayers.

Here is an example of what the tax "postcard" that it is expected that 90% of taxpayers will be able to use to file their annual tax return.

All in all, when you look at all of this you definitely see the slant toward the middle class income earners in everything that was done.

If there are benefits to the so-called "rich" they are going to generally be available more to those with businesses that create jobs with the lower corporate and "pass-through" business income tax rates ( I am not even going to try to explain the "pass through" rate but I expect this to be a very contentious issue in the debate on the bill).

Will the Republican Congress be able to get a tax reform bill like this over the finish line?

It will not be easy.

The special interest groups are already spinning into action.

They are more concerned with "ME" than with "WE". 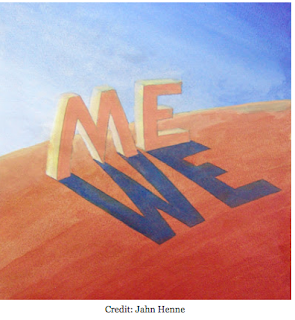 I have not run the numbers but I doubt if I am going to benefit directly from this bill. My state and local tax bill is pretty high. I don't have any dependent children to take advantage of the increased child tax credit. I don't own a corporation. I don't have any profits to repatriate from overseas.

However, I believe it is worth doing this reform for a broader, flatter and simpler tax system...and for what it can do for our nation's economy.

Those in Congress need to think the same way. Think "We" rather than "Me".

This bill is not perfect. Far from it.

However, I give it a "B' for better than what we have now.

That is the way the GOP Congress has to grade it as well.

If they do not, they are facing an "F" for failure on their legislative agenda this year.

That is not a good place to be heading into an election year.
Posted by BeeLine at 9:55 PM