The Road To Tax Reform

You are going to be hearing a lot about tax reform in the next several weeks as Congress attempts to craft and pass a legislative package before year end.

I thought I would try to put the issue in some form of context to help you better understand the issues surrounding tax reform.

The Democrats' favorite talking point on any discussion of tax reform or tax cuts is that it "benefits the rich."

I guess it depends on what your definition of "rich" is but the fact is that almost all income taxes are paid by "the rich".  It just depends on your perspective. After all, to most of us, anyone who makes more or has more than we do, is rich. It is a relative term.

Here is the breakdown for 2015 which is the latest data available from the IRS Statistics of Income Tax Stats. 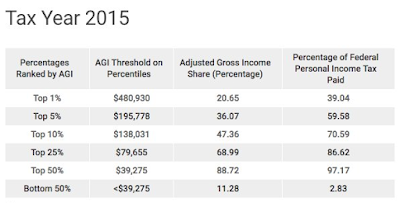 I think it is also important that you also know how a progressive tax system works. The concept is that as your income gets progressively higher the tax rate increases.

However, notice that everyone is treated equally within each income level. The person with the high income still pays 0% on the first $20,000.

It is simply impossible to reduce any tax rates at any level of income and not "benefit" the rich.

Keep this in mind as you listen to Democrats complain about tax reform.

However, Republicans are sensitive to the criticism and want to skew the benefits as much as they can to the middle class. How do you accomplish that when the rich pay so a large proportion of total income taxes.

You go after deductions and tax benefits that disproportionately favor the rich.

That is why you have heard so much talk about eliminating or reducing the deduction for state and local taxes. This is the easiest way to increase the taxable income of the "rich" without hurting the middle and lower classes.

Mortgage interest and charitable contribution deductions are much less costly to the federal government.

Therefore, if you are trying to reduce tax rates and get some of the money back elsewhere, the biggest bang for the buck comes from going after the SALT deduction. 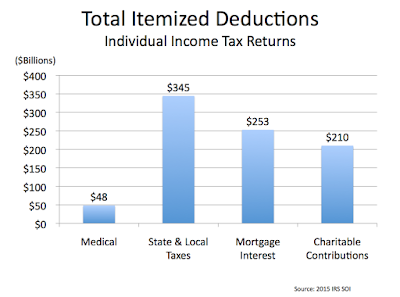 It is also much easier to go after state and local tax deductions than it would be to try to take away deductions for home mortgage interest or charitable contributions. There are much more entrenched special interests protecting these deductions.

The big picture can be seen by looking at the graph below that compares the number of returns filed that claimed the state and local tax deduction (only 38 million out of 150 million) with the amount of the deductions claimed.

Consider that those with incomes over $500,000 took only $17 billion in mortgage interest deductions (a lot of cash buyers in that income group) compared to $132 billion in SALT deductions

Charitable contributions deductions ($114 billion) are also lower for this group than what is deducted for SALT ($132 billion). 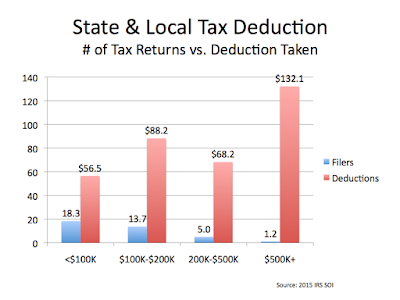 Of course, the fact that someone else is getting hammered harder than you are still does not play well in Pomona or Poughkeepsie if you are paying (and deducting) your state taxes and you think you are going to "lose" something. That is why, despite looking at the numbers above, this is still a difficult political issue.

Many people will save more in the rate reductions in tax reform than they lose in tax deductions but few will combine the two and do the math. To them, they are losing something if the state and local tax deduction is eliminated.

I would not be surprised if a compromise is reached to allow state and local tax deductions up to some maximum amount or provide some type of limited tax credit.

You can see the possibilities for how this could work in looking at the average state and local tax deduction per income group. 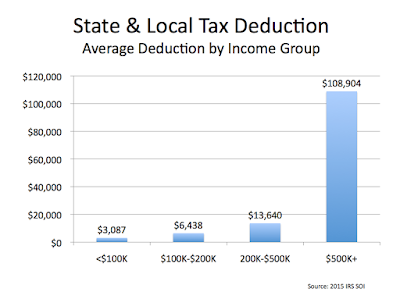 Allowing the state and local tax deduction but capping it at around $10,000 (or allowing a $2,500 tax credit) would probably reduce the noise level considerably.

There has even been talk to eliminate both the SALT and home mortgage interest deduction and replace it with a homeowners credit. This could be structured to hurt the "rich" but to leave most of the "middle class" unscathed. One idea would provide a 12% tax credit (dollar for dollar reduction in taxes) for the amount of interest and property taxes on your home.

I am strongly in favor of tax reform. I wrote about my general philosophy on the subject over five years ago in "Broad, Flat and Simple."  Here is what I wrote then which I still believe the principles we should follow in tax reform.

On the individual income tax system we should be making the tax base as broad as possible by eliminating as many deductions, credits, preferences, exclusions and exemptions as we can.  The rate structure should also be as flat as possible to eliminate the cross currents of class warfare that divide us and to provide incentive for future work, investment and capital formation.  Finally, it should be simple enough that anyone can comply with the tax law without an accounting or law degree.


Is this tax reform all those things? No. You are never going to get everything you want in Washington. However, it takes us down the road closer to where we need to be and it would be broader, flatter and simpler than it is today.

Ideally, I would use the tax system to raise revenue--nothing more. It does not have to be complicated, confusing or complex.

You need to realize that all of its complexity is not needed to raise revenue.  It is only necessary for government to have the power to legislate, regulate and stipulate what its citizens should and should not do. Picking winners and losers. Redistributing income. Promoting and protecting special interests rather than promoting the public interest. You don't need a massive and complex tax system to protect, defend and serve the general welfare. You do need one to manage, control and serve special interests.

It is hard to go broad, flat and simple because you are attacking the lifeblood of Congress. If it cannot grant special rules or status it substantially limits its influence and power--particularly with special interests. At the same time, if there are no exceptions or preferences, there is little need for special interests to try to curry favor.

You can already see how much the special interests swing their weight around based on the recent report that the National Association of Home Builders will oppose the GOP tax bill because of 1) the increased standard deduction and 2) the potential loss of the SALT and/or home mortgage interest deduction. Why is this a problem to Republicans? The NAHB is a big supporter of Republicans. 83% of its contributions in the last election cycle went to GOP candidates.

Yes, I would like to get further down the road on tax reform compared to where we will likely get. However, in the world of Washington, I have learned to that any step forward is a win. I will take whatever we can get and be happy.
Posted by BeeLine at 10:38 PM