Is The Dam Starting To Break?

The mainstream media has finally reported what was patently obvious to me months ago. The Washington Post reported yesterday that Fusion GPS, the research firm that produced the notorious “Trump Dossier,” was funded by the Hillary Clinton presidential campaign and the Democratic National Committee.

This has the potential to be a game changer in the entire "Russian Collusion" story that Hillary Clinton and the Democrats have been trying to hang on Donald Trump since she lost the election.

The Clinton campaign tried hard to peddle the dirt in the so-called "Trump Dossier" but it has been generally regarded as unsupported or unsubstantiated allegations or an outright fabrication of lies.

What is particularly interesting is that the FBI under James Comey also got interested in the Trump Dossier and there are reports that the FBI paid expenses of the individual producing the dossier to continue to try to find dirt on Trump in the latter days of the campaign.

Bear in mind that the Clinton campaign is already defending its involvement in this as only doing opposition research. If that is the case, what was the FBI doing in using taxpayer dollars to pay for opposition research against one candidate in a Presidential campaign?

Of course, what is ironic about the entire story is that Clinton has argued since she lost the election that it was due to Trump colluding with the Russians to influence the election. However, it is now evident that the Clinton campaign was clearly colluding with the Russians (though its agent) by seeking dirt from the Kremlin and others about Trump.

Another interesting twist in the story is whether the Obama administration used some of the information in the Trump Dossier to justify the "unmasking" of those close to Trump in requests to the FISA court for wiretaps and other surveillance.

There are those in the Obama administration that may also be caught up in the backdraft of this story depending on what the paper trail indicates was used for the support in FISA requests. Curiously, the FBI has stonewalled the House Intelligence Committee for over two months on what was used to support those FISA requests.

Bear in mind that earlier in the year the Obama administration had previously been denied a FISA request on Trump because of the lack of any compelling reason to do so. They may have used the Trump Dossier contents on the subsequent successful request but there seems to be evidence that they should have known the allegations therein were unproven. If so, perjury charges may be await those that were involved in the request.

You have to ask whether the dam is starting to break? 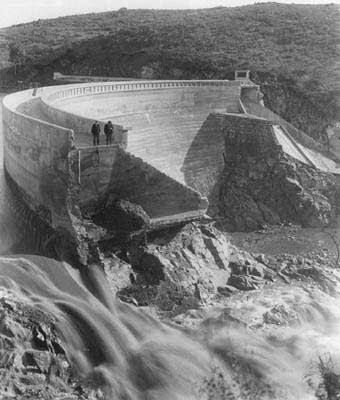 Of course, many thought the same about Harvey Weinstein.

When the dam breaks, the flood that engulfs those downstream is fast and furious.

Watch the news carefully in the coming weeks to see who is being thrown under the bus and who is running for cover.

We are already seeing evidence of this taking place by high profile Democrats who are famously known for circling the wagons and never breaking ranks.

A couple of examples in the last week.

Former President Jimmy Carter recently stated that he does not believe Russia stole the election from Hillary Clinton by changing any votes.

Tom Perez, the Chairman of the Democratic National Committee, went out of his way to state that "the "new leadership" of the organization was not involved in any of the "decision-making" regarding the research firm behind the dossier". Of course, he did not state that the previous DNC was not involved.

The other big news this week was the disclosure that Special Counsel Mueller, who is investigating Russian collusion, has reportedly expanded the probe to include the Podesta Group (tied closely to the Clintons).

This is where it gets really interesting if you consider the theory that Larry Schweikart, writing in BigLeaguePolitics.com, is proposing.

He asks the question in a recent article, "Is Mueller Actually Working For Trump?"

I will admit that his thesis is way, way out there but he does raise some interesting questions and points..

Schweikart argues that Mueller is actually working for Trump. The entire Russian collusion investigation is a smokescreen to investigate a number of high profile Democrats--- (the Podesta brothers, Loretta Lynch and potentially the Clintons). He makes the point that this is the only way that an indictment could be brought as the media and the Democrats would be constantly belittling the investigation if it was out in the open.

Keep in mind that the media views its job as tamping down any fire that looks like it will engulf Democrats while fanning the flames on any embers around Republicans.

Schweikart explains his theory in his own words..

Mueller hires, supposedly, a bunch of biased lawyers (some of whom, it turns out, specialize in financial transactions—which was never, ever mentioned in the original “charges” against Trump). So in addition to the fact that Trump was told on multiple occasions he was not a target, it also appears that the types of lawyers Mueller hired were looking at something entirely different than “Russian collusion.”

Trump, Sessions, and Mueller all knew that for the investigation to succeed in getting Loretta Lynch, James Comey, the Podestas, or anyone one else on the left, it had to operate in secret and totally below the radar. In other words, it had to look like it was pursuing Trump, even though he was told on multiple occasions he was not a target, and even though he has dismissed most—if not all—of his criminal defense team.

Further, it had to look like Sessions was incompetent. Trump provided “Cheese in the maze” early with Tweets about “Why Sessions wasn’t doing anything” and the like. The giveaway was the following day, Sessions had a presser for another sting and was smiling as if he knew exactly what was going on. People in Alabama tell me he had a sterling record and never brought cases that couldn’t be won.

Unfortunately, it was essential that at first Mueller/Sessions “look” at Trump people, hence some of the Trump associates had to hire lawyers—which Trump has graciously offered to pay for. I do not think the associates were at all in on the game.

At some point, after Manafort’s “investigation” most likely, the investigation would shift to the Democrats. Note today NBC has reported that Mueller is investigating Tony Podesta. This is the tip of the iceberg.

To recap: from the outset Trump hired Mueller via Rosenstein to carry out the investigation of the Dems, most notably Podesta, but likely ending with the Clinton Crime Family Foundation, as Rush Limbaugh calls it. No one would get Hillary Clinton on the e-mails–but you might get her on something else, the Foundation. Further, this is being carried out in utter secrecy on Mueller/Sessions’ part. Finally, word is starting to leak out from targets that the investigation has shifted. Oh, and none other than Jimmy Carter just came out praising Trump, and says the election wasn’t rigged. What’s that all about?

Is the dam starting to break?

Not yet but it has definitely sprung a leak.

Let's keep a close eye on it.

If it breaks it could sweep a lot of people away.
Posted by BeeLine at 9:52 PM