What makes something go "viral'?

We hear that term a lot in the interconnected world we live in today. It is used to describe popular videos on YouTube, songs that climb the charts or marketing campaigns for hot new products.

The idea is that something becomes inherently infectious and is passed from person to person like a virus.

I recently read the book, Hit Makers, by Derek Thompson. Thompson takes an in-depth look at how things become "viral" in the book.

Traditional thinking seemed to assume that some videos, songs, ideas or products became "viral" much like an infectious disease. One person infects two. Two infect four. Four infect eight. It is much like a gigantic pyramid built on person to person contact. 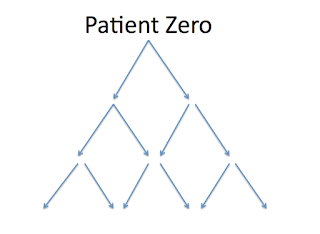 Thompson states that research from Yahoo and others who have studied the spread of millions of online messages on Twitter show this is not how things become "viral"on the internet.

In fact, their research showed that 90% of messages on Twitter showed no diffusion at all. Only 1% were shared more than seven times.

The vast majority of news that people see on Twitter comes from the original source or from one degree of separation.

If that is the case, how do some things spread so quickly?

It is done by what Thompson calls 'broadcast diffusion". Many people get information from one source.

Digital blockbusters are not about a million one-to one moments as much as they are about a few one to one-million moments.


The same can be said for other things that spread in popularity. Ideas, articles, books, songs and products don't spread like the graph above.

They grow like the graph below from one source to many. many individuals at the same time. It is not like the one-to-one transmission of a virus. Instead, many people are exposed at once but then one or a handful of those in the initial exposure group share and pass it on. 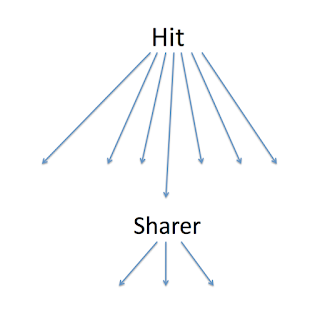 In effect, the sharing by the few in the initial exposure is duplicated down the line. Most do nothing but the numbers who share can have a big impact down the line.

Thompson points out that almost nothing really goes viral organically. Some ideas or products may have more infectious qualities but nothing goes BIG unless it has that big initial broadcast source---the mention on Oprah, the significant advertising spend, the Walmart book stand or the tweet by Katy Perry.

I can attest to the validity of Thompson's observations based on my own experience with BeeLine's readership analytics. I can immediately tell when one of my blog posts has been shared by someone with a lot of followers on Twitter or Facebook. Readership explodes at once. That one sharer makes a huge difference in readership. I see the spike in volume immediately. It then tails off rapidly unless someone else shares it.

If you want to make BeeLine viral, share it liberally.

Does anyone know Katy Perry?

Never mind, I doubt she is going to share much of what I am writing about anyway.