All In A Name

Last year I wrote about the business of baby naming and the fact that I was a "Name Nerd".

Naming a baby is much more complex and complicated than it once was.

A lot of that has to do with the fact that parents have much greater access to a range of name choices than they did in the past. This is how I explained it in my last blog post on the subject.

Historically, family names have been the predominant means of naming a baby.  That is one of the reasons that if you went back to the 1880's, one in every four boys was named John, William, James or George. One reason--they did not have access to baby name books or the internet. What was the one book people had? Yes. The Bible.

A lot has changed in the baby name business in the last 30 or 40 years. The most important change has been the accessibility of information on the internet. Instead of relying on a dog-eared baby name book of 1,000 names, that did not give you much more than the meaning behind the name, you can now peruse 10,000 names at the click of a mouse. You can also learn exactly how popular the name is, what other people think of it on 7 dimensions (strong? sexy? sophisticated? smart?) and other people's experiences with the name.

The other thing that is interesting to me is the cyclical nature of names. Names cycle in and out of popular culture over the generations. When I was growing up names like Henry, Emma, Oliver and Cora were names of my grandparent's friends. My generation would not think of giving our children a name like that. The younger generation today never knew anyone with these names. To them it is new and cool. The names they are avoiding are the ones that many of my school classmates had in the 1960's--Larry, Terry, Brenda and Barbara. After all, they only associate these names as friends of their grandparents.

Nameberry.com is one of the internet sites devoted to baby names. One of the features on the site is a listing of the most popular names that are being researched on the site. This is the current list for 2017 girls and boys. 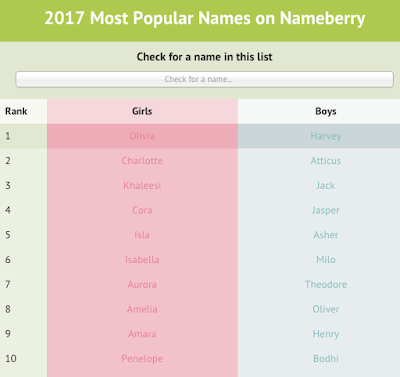 How did Harvey end up at the top of the list for most popular names for boys?

This is especially true considering what we now associate with the name Harvey.

The reality is that all of the news with the name Harvey involved may actually be the reason that Harvey has become a popular name search on Nameberry. After all, most young parents today have not heard the name Harvey very much.

Here is a graphic from the BabyNameWizard.com's Baby Name Voyager that tracks the popularity of the name since the 1880's. All the graphs below are from this source. 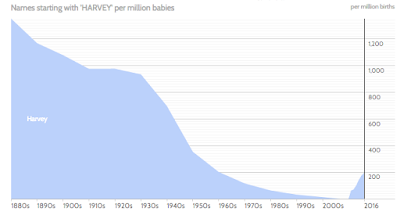 Harvey was in the Top 100 names from the 1880's through the 1930's when it started to sink in popularity. In the 2000's it was completely out of the top 1000 names. However, in recent years it has started a comeback. Will the increased visibility of the name translate to more Harvey's on birth certificates? I would be surprised as names with bad connotations tend to not stay popular. 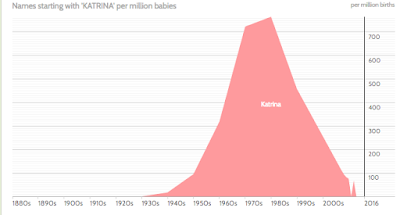 It used to be that the name of the President of the United States would result in more babies with that name.

For example, Theodore was a popular baby name when Teddy Roosevelt was President at the turn of the century. 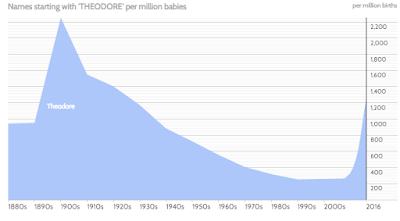 Or Franklin when FDR was President in the 1930's. 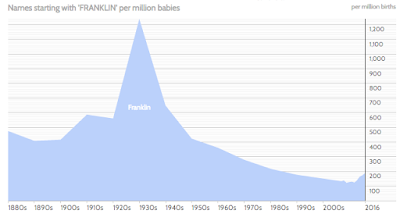 That doesn't seem to apply anymore. Barack has never reached the top 1000 in any year. Schools may be named for him but very few parents are naming their children Barack. 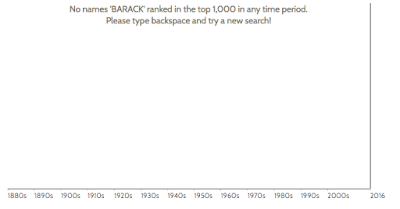 What about Donald and Hillary (or Hilary)?

Did the 2016 election create any excitement about either name on the 2017 Nameberry Most Popular Names List?

Hillary (or Hilary) is not to be found anywhere in the Top 1000 names. According to Name Voyager, that name has not been in the Top 1000 since 2009 (the year Mrs. Clinton became Secretary of State).

Donald is #772 on the 2017 list. The last year birth records are available (2015) Donald was #441 among boys names. Not great but a far sight more popular than Barack or Hillary. 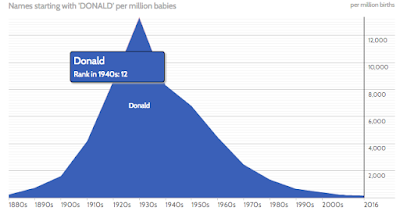 Getting back to Harvey, I thought it was interesting that meaning behind the name "Harvey" is "battle worthy" according to Nameberry. That seems appropriate considering what appears to be in front of Harvey Weinstein.