When I lecture on financial planning to young adults I make the point that their life is roughly divided into four quarters---you could also consider them to be four seasons.

The first quarter (roughly 18-23 years) you are generally relying on someone else for your financial needs. Someone else is paying your rent, making sure you are clothed and have food in your mouth. They are trying to make sure you are being educated. They are paying your cell phone bill.

In this spring season of your life, someone else is paying for the seeds, fertilizer and water. Your main responsibility is to grow to be a responsible human being and be prepared to support yourself over the next three quarters (or seasons) of your life.

The second and third quarters (the next 40-45 years) are your working years. You have to find a means to support yourself financially. Early in the second quarter, most will marry. This is highly advantageous economically as it allows you to share expenses, divide labor and tasks. Being married is a huge benefit in financial terms. Two cannot live cheaper than one but they can live much cheaper than two singles.

Being newly married, with both individuals having incomes, is the golden age of your financial life. It is as if you are at the peak of the summer season.

However, soon thereafter, little people have a habit of arriving around your home. With them come needs. Lots of needs. Needs that have to be met.

That requires you to take some of your income and begin satisfying those needs just as was done for you. Children need food, clothes and other things. Over time, they need (and want) more and more. You are now not only supporting yourself but others as well.

During that summer season, and into the fall season, you also begin to realize that at some point winter will come. You do not want to keep toiling in the field and laboring from sunrise to sunset. You will want to retire. You may be forced to retire. In that last quarter of life (which very likely can be 20-25 years) you have to live off savings accumulated during your working years. In effect, you need to store some of your summer work and fall harvest for the coming winter months.

It looks something like this if you put it in graphic form. 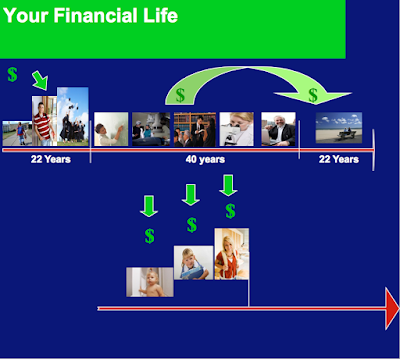 In the first quarter of life, someone else is taking care of your needs.

In the second and third quarter of life, you have to take care of yourself and any children that come along.

At the same time, in addition, you need to be putting enough savings away in order to support your needs in your fourth quarter---your retirement years.

People wonder why it is so hard to get ahead.

Think about what I just described.

During your working years, you are effectively supporting three generations with one income.

That is a little sobering.

That is why I tell young people to save until it really hurts. They typically respond that they don't have the means to do it. They say they are just getting started. They will put something away in the future.

It never happens. It doesn't get easier. It gets harder.

When you are young and single, you are only taking care of yourself. It won't be long until you realize what it is like to really be caught in the middle.

Here is a graphic that really captures what it is like to be caught in the middle. This is a chart I saw in ValueWalk that provides a data visualization of the U.S. population sorted by current status in the labor force.


This really makes the point about how those who are working in the second and third quarters of their life are really caught in the middle. The workers are surrounded on all sides---by children on the left hand side, by seniors on the right hand side and by those not working on top of them. They are paying for their kids, for their future retirement and, at the same time, a healthy amount of taxes to support those who are unemployed. Oh yes, they also are working to support themselves.

Everyone needs to eat. They need a roof over their head. They need health care. It falls to those in the middle of that graph to provide it all in our economy. It is probably appropriate that the color of the working employed is purple in that chart. They deserve a purple heart for their efforts.

Looking at all of this is why I  typically counsel young married couples to save at least 50% of what they make. Ideally, they should be saving all of what the higher income spouse earns and live off of the income of the lower income spouse.

Not many take my advice but the reality is that they will never have a better time to save.

Speaking of marriage, here is another data visualization of the marital status of Americans visualized by age.

You know the old saying, "Make hay while the sun is shining".

It is also true when it comes to your financial life.

For most, that is going to be before children are born or after they are no longer living in their parent's basement.

However, a dollar saved early compounds over many periods. One saved late does not have the same leverage. That is why you should start early and you need to save the most when you are young. It is the easiest time to start turning The Wealth Wheel to your advantage.

Keep this lesson in my mind in considering your financial life.