What makes one song a hit and another a flop?

That is one of the questions at the heart of a book that I recently read by Derek Thompson titled, "Hit Makers: The Science of Popularity in an Age of Distraction." 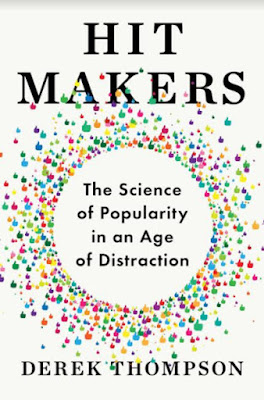 There is a science to it. Nothing "goes viral" by accident.

For example, how would you know that a song nobody ever heard has the potential to be a hit?

How do you know if people will "like" it , hum the tune and tell their friends and neighbors about it?

There are actually online song testing companies that survey thousands of people to evaluate the catchiness of new songs to judge how they will be received by the general public.

For example, the aptly named company "Hit Predictor" has found that songs scoring 65 or over on its numeric scale (scores can go into the 100's) have the potential to be a breakout hit.

Here are a few Hit Predictor scores of the songs that did become hits. I have added the YouTube link of the official music video of the song to each. Each entered the top five on Billboard Hot 100 in fall, 2015.


There is a similar UK company called "SoundOut" that tests about 10,000 tracks online a month.

Adele songs also test well with SoundOut. The magic number for hit success on SoundOut's metric is 80. For example, SoundOut tested the songs on Adele's second album, "21" before it was released. Every song on that album scored over 80. SoundOut says it has never had that occur ever--before or after "21".

However, only three songs on that album ended up number one hits. Catchiness of the tune does not guarantee a hit once the key threshold is met. Hits only because hits because of exposure and repeated repetition.

I have written before that the one thing that drives favorability with human brains is familiarity. The most popular songs are the ones you have heard the most. We like those things we are exposed to the most.

Reading this in "Hit Makers" reminded of my blog post from 2014 on the popularity of various music genres over time. It is worth reading again with the benefit of Thompson's views on the science of popularity.

Music is much more diverse today than it has ever been. Jazz dominated in the 1940's. Why was that? Perhaps it was because there were just a few AM radio stations and they all played jazz. It is difficult for other music to be popular when nobody ever hears it.

Notice how music genres started to diversify with the advent of television and FM radio in the 1950's and 1960's. There were more outlets for people to hear different kinds of music.

Music started to diversify more in the 1970's and 1980's with even more distribution options like cable tv and shows such as MTV.

It has really opened up in the digital age. It is no accident that music tastes have become more diversified as the distribution of music has become more democratized.

Songs do not become hits or go viral by accident.

As Thompson explains in the book, "Content may be king, but distribution is the kingdom".