Saving For A Rainy Day

I will never forget the interview that I saw of a Chinese couple on television a few years ago.

They were a young married couple who had moved from rural China to work together in one of the factories in Guangdong Province.

They lived in a small, one room apartment with only the bare necessities. Their only real cooking utensil was a large bowl that they used to cook their meals on a small stove. They slept on a mattress on the floor. They had no television or computer. They were saving well over 50% of their wages.

The interviewer asked the couple why they saved so much money when they could spend more and have a better life today.

The husband shook his head and replied,

"We need the savings. We could get sick. We would have to pay the doctor. We might not be able to work for awhile. We could lose our jobs. We save because the future is unknown."


It struck me at the time of how incongruous it all seemed to be. This was a man living in Communist China. The theory of communism is that the people will be taken care of by the state. Their education. Their employment. Their health and welfare. However, this man and woman knew they were on their own.

Contrast that with the United States, a supposed evil, greedy capitalist country where we have a social safety net that provides all of the security that the Chinese man and woman were worried about. Health insurance. Disability insurance. Unemployment insurance. Social Security. Medicare. Food Stamps.

It is big reason why the national savings rate in China is almost 50%. At the same time, personal consumption in China composes only slightly more than 50% of China's gross domestic product. 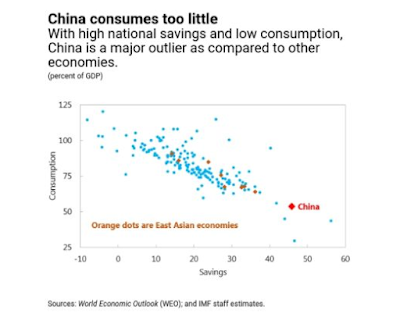 This chart from CNBC shows how other countries compare on their national savings rates. By the way, this data is national saving which is defined as gross national income less total consumption so it takes into account not only personal savings but includes savings by companies as well. 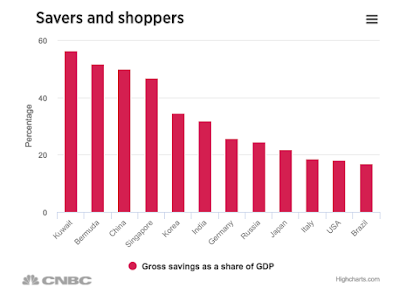 The United States is certainly not a nation of savers. The current personal savings is 3.8%. That is the average amount that is left over from personal income after considering personal outlays and taxes.

This chart from the Federal Reserve of St. Louis shows that the personal savings rate has generally been on a downward slide since most of the significant social safety net program were initiated in the mid-1960's (Medicare, Medicaid, food stamps etc).

It is interesting to note that almost every time there has been a recession (the gray bars in the chart) the savings rate has spiked. It seems that it is only in these times that Americans seem to wake up and begin to realize, like the Chinese worker in Guangdong, that the future may not be all be milk and honey.

Even more interesting is that the only time in the last 50 years that there was a huge spike in the savings rate that was not associated with a recession was right after the re-election of Barack Obama in 2012. To be fair, there was also a small spike right after the re-election of George W. Bush in 2004. Perhaps these elections caused more than a few people to get nervous about the future.

Despite all of the media hysteria, we have not seen a similar effect on the personal savings rate after the election of Donald Trump. We also know that the value of financial assets, particularly the stock market, has also risen substantially since last November. The S&P 500 is up nearly 20% despite the fact that people like Paul Krugman warned that the economy was doomed with a Trump election.

The reality is that a lot more people should be saving for a rainy day.

As we saw in Houston and southeastern Texas, Florida, Puerto Rico and the Gulf Coast recently, rainy days do come.

And it can rain for many more days (and rain harder) than we ever imagined.