Did you see what Bernie Sanders said about the 2018 federal budget blueprint that was passed by the Senate last week? 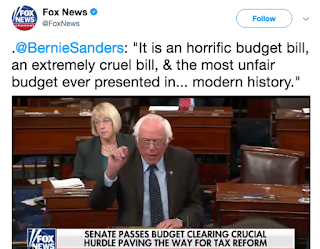 Bernie called it "horrific", "extremely cruel" and "the most unfair budget...in modern history."

Let's take a closer look at the budget and put the numbers in context so that you can judge the validity of Bernie's remarks.

The Senate budget that was passed forecasts total spending of over $4 trillion in fiscal year 2018.

In real terms (adjusted for inflation), that would be the second highest level of federal spending in the history of the federal government. It would only be surpassed by the 2009 budget which included all of the Obama stimulus spending in that year. This chart shows federal spending (in constant 2017 dollars) from 1976-2017.

Notice the spending in the last eight years in particular. We are now at an entirely different level of spending since that 2009 budget.


The amount of federal government spending that is made up of payments to individuals in the 2018 budget (Social Security, Medicare, Medicaid, Welfare, Food Stamps, Unemployment Assistance, Obamacare subsidies, Student Loans, Federal Employees Retirement, VA Benefits) makes up a record $2.9 trillion.

Those payments to individuals do not include salaries to government workers or the military as these are considered to be payments in return for current services provided. Therefore, "payments for individuals" effectively represent what amounts to be the redistribution of income from one person to another with the federal government serving as the middle man.

These are not outlays for the common defense, common good, public works or public safety.  These are government payments that are intended to benefit select individuals based on their age, their income, their health or any one of a number of other distinctions.

If you do the math, that means that almost 71% (almost 3 out of 4) of every dollar of federal spending is being paid to individuals in some form. That means that everything else that we commonly think of as the functions of government makes up only 29% of the federal budget.

Here is the breakdown of these payments to individuals by major category.


Does that look like it is "cruel' and "horrific" as it comes to individual needs?

If Defense spending is excluded (arguably the one function of the federal government that is probably most essential), as well as interest on the federal debt, direct payments to individuals account for 93% of all federal spending.

The Senate budget action was a critical step in order to bring income tax reduction and reform legislation before the Senate before the end of the year.

In case you have been led to believe that your income taxes are too low and that the federal government could solve all of its problems with a little more tax revenue, look at this chart that shows income tax revenues for the years 1976-2017 in real dollars.

The last three years have seen the highest income tax collections in U.S. history after adjusting for inflation. Income tax revenues for 2018 under current law are forecast at $1.836 trillion under by the Office of Management and Budget. That will be highest in history even after adjustment for inflation.

It is interesting to note that income tax collections in 2018 will be about double what they were in the Clinton Administration (in inflation adjusted dollars) but the Democrats still believe that income taxes are too low today.

You might even call current income taxes "cruel" "horrific" or "the most unfair in modern history" if you had a mind to do it.

The facts back it up.

It is hard to look at the facts and say the same about spending in this budget being "cruel" and "horrific" to individuals in our society. That is where almost all of the tax dollars are being spent.

You would think that $2.9 trillion would be enough to satisfy the various social needs of our society. After all, we are talking about a sum that is approximately 15% of our nation's total GDP. To put that in further context, there are only four countries in the rest of the world where the entire nation's  GDP exceeds $2.9 trillion---China, Japan, Germany and the UK.

However, for the liberal left, whatever we spend is never enough. It would not be enough if were spending $3.9 trillion on payments to individuals in the federal budget.

If you learned something in this post, send it on to a Bernie Sanders supporter you love. They might learn something as well.

Speaking of Bernie supporters, I thought CampusReform.org. came up with an interesting insight in recent campus interviews. They went on the campus of George Washington University and asked students if they supported the Trump tax plan. All parroted the talking points of the liberal left. However, when given the details and told it was Bernie's plan, they thought it was a good plan.

Click here if the imbedded video does not work in your browser.

It is worth viewing in explaining why I write BeeLine. You have to get people past the headlines, hyperbole and histrionics and look at the facts....in context.