Corrupt To The Core

Two stories that surfaced this week speak volumes about how the mainstream media and the Democrat establishment is corrupt to the core.

The fact that you have likely not seen mention of either of these stories in the mainstream media should tell you all you need to know about the corruption therein.

When you read the details below I want you to imagine how these stories would be played in the media if Trump or a top Republican was involved.

While the media is spending all of its time the last couple of day on Trump's condolence call with the widow of a fallen Army solider (he allegedly was "insensitive" on the call), these stories have gotten almost no attention. It is almost incomprehensible considering the facts as they have been reported.

The first story involves former U.N. Ambassador (under Obama) Samantha Power's closed door testimony to House Intelligence Committee investigators last week. Power was asked to testify in order to explain how 260 requests had been made in her name to "unmask" American citizens who had been caught up in National Security Agency surveillance of non-U.S. citizens. Those 260 requests were all done in the last year of the Obama administration. That works out to one request for every working day.

Government Oversight Chairman Trey Gowdy reported that Power testified that she made some requests but nothing on the order of the 260 attributed to her. She stated that someone else must have been using her name on the requests.

This should be a bombshell story but I was lucky to find reference to it in any mainstream news source.

First, why is a woman who is a diplomat at the U.N. have a security clearance to unmask names of U.S. citizens? That seems strange in itself. Her job is focused on diplomacy with other nations. It makes no sense whatsoever for the UN Ambassador to have "unmasking" authority for U.S. citizens.

In addition, what kind of system and controls are in place that would allow someone else to use Power's name to unmask NSA surveillance data on a U.S. citizen? Are the controls in place that lax?

You can only come to two conclusions after reading the report of Power's testimony.

She has either lied and committed perjury before the House Committee

There is a serious lack of control over the surveillance program and there should be an immediate investigation as to who used Power's name to access the data and that person should be arrested and tried for this serious intelligence breach.

One other possibility is that Power could have also knowingly given her "password authority" to someone else that lacked authority and she is being cagey about the facts in her testimony before Congress.

In any case, all of this points to serious corruption within the Obama administration in the handling of this intelligence.

The failure of the media to aggressively follow this story is corrupt as well.

It is corrupt to the core.

The second story that you have not likely heard or read about involves reporting by The Hill that an FBI investigation uncovered a Russian bribery plot before the Obama administration approved the controversial deal that gave Moscow control of a significant amount of American uranium.

According to the story, the FBI's investigation had gathered substantial evidence that Russian nuclear industry officials engaged in bribery, kickbacks, extortion and money laundering to control parts of the nuclear energy business in the United States.

All that the Democrats and the mainstream media seem to want to talk about is Russian collusion with the Trump campaign in the 2016 election. However,  here is a story about an FBI investigation showing that Russian collusion was actually occurring in the takeover of a portion of our uranium assets and yet you hear nothing about it.

The reporting of The Hill on the details of the FBI investigation are pretty damning.

They also obtained an eyewitness account — backed by documents — indicating Russian nuclear officials had routed millions of dollars to the U.S. designed to benefit former President Bill Clinton’s charitable foundation during the time Secretary of State Hillary Clinton served on a government body that provided a favorable decision to Moscow, sources told The Hill.


Consider that paragraph again. The FBI had an eyewitness account-- backed by documents-- that the Russians routed millions to benefit the Clintons at the same time that Hillary Clinton was Secretary of State and in a position in the Obama administration to influence the uranium transaction.

What is most troubling in all of this is that, despite the investigation that uncovered extensive illegal activities and national security concerns, the FBI did not disclose any of this information before the Obama administration approved the sale of the uranium even though all of this evidence had been gathered and was known to the FBI.

Why on earth would they sit on this information and allow this sale to go through considering its national security implications?

It makes you wonder what was going on at the FBI or at higher levels in the Justice Department.

All of this smells of corruption.

As does the failure of the media to aggressively follow this story.

All of it is corrupt to the core.

If you doubt what I am saying about the failure of the mainstream media to report these stories look at these screen shots of a Google search of "Samantha Power testimony on unmasking" and "FBI Russia Uranium Investigation". 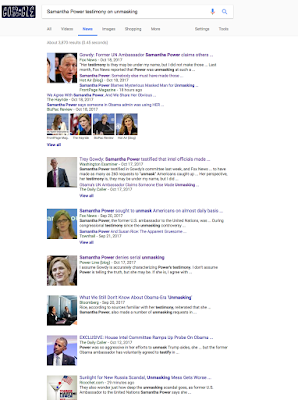 There is not one mainstream media news source other than Fox News at the top of the search results page. 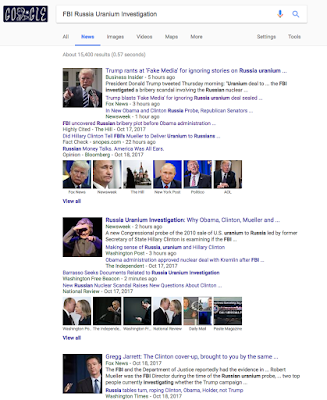 There is not one mainstream source here either other than The Washington Post. The Post story is actually a defense of Clinton and an attack on the story arguing that there is nothing to it. The New York Times, CNN, NBC, CBS, ABC and NPR are nowhere to be found on the search page results.

Compare that with a search on Google of "Trump insensitive to dead soldier family". 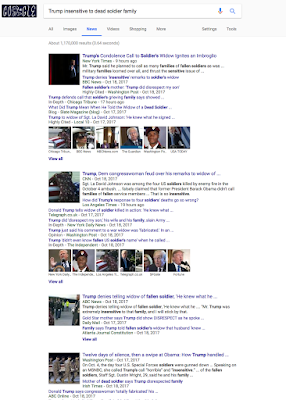 The New York Times, BBC News, Washington Post and Chicago Tribune are the first four hits. CNN, LA Times and ABC News are not far behind.

Donald Trump is crude at times. He can be arrogant and antagonistic when challenged. His enemies think he is a clown or he is crazy. However, there is no doubt he loves this country. And there is no sense that he is corrupt.

That is a darn sight better than what we see in these stories and in how the mainstream media is treating Trump.

Corrupt to the core.

How else do you explain it?
Posted by BeeLine at 8:16 PM