Nothing gets a liberal more excited than the thought that the internal combustion engine will soon become nothing but an exhibit in a museum next to buggy whips and whale oil lamps.

Of course, their gripe is not so much with the engine but with the power source---the fossil fuel that makes that engine go---and the carbon emissions that they blame for altering the planet's climate.

That is why the promise of battery-powered cars are so important to the left. California already has a commitment to see to it that there are 1.5 million "zero emissions" vehicles by 2025. (There are 300,000 on the road today. This is about half the total electric or hybrid vehicles in the USA.).

A California legislator wants to take it a step further and ban the sale of new cars powered by internal combustion engines by 2040. France and the U.K. have already announced a similar policy. India wants to get there by 2030. China says it wants to do it even sooner.

How realistic are these goals?

Let's take a look at two issues that relate to that "zero emissions" future.

Of course, both of these issues are not at the forefront of thinking by the left.

Liberal Democrats tend to focus only on that which is "seen" while ignoring those things that are "unseen". It makes things easier. Unfortunately, life is not that simple.

Frederic Bastiat made this observation in an essay back in 1853 about economists but I believe it can be equally applied to politicians and policymakers.

There is only one difference between a bad economist and a good one: the bad economist confines himself to the visible effect; the good economist takes into account both the effect that can be seen and those effects that must be foreseen.

In the economic sphere an act, a habit, an institution, a law produces not only one effect, but a series of effects. Of these effects, the first alone is immediate; it appears simultaneously with its cause; it is seen. The other effects emerge only subsequently; they are not seen; we are fortunate if we foresee them.


My experience is that Democrats generally confine themselves solely to visible effects.  They seem to consider only first-level effects and ignore everything else that might flow from that.  All of their focus is on what they see in front on them. They ignore the unseen issues. Republicans, on the other hand, are better at considering both the immediate effects and second-level effects. The seen and the unseen. Especially the unseen effects which should be foreseen. I have written about the seen and unseen in these pages before involving issues such as the budget deficit, immigration, abortion and gun control.

So it is with "zero emissions" vehicles as well.

Liberals want to ban gasoline powered vehicles for electric cars. However, where does the power come from that those electric cars need from the power grid when they plug in?

This is the most recent forecast for power generation in the United States for 2026 by BMI Research. 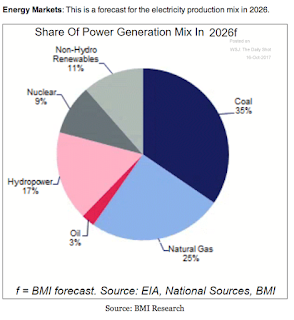 Note that in 2026 it is forecast that the largest single source of power generation will still be coal. Combined with natural gas and oil, fossil fuels are still forecast to make up almost 2/3 of U.S. power generation a decade from now. Nuclear is another 9%.

The other "unseen" issue is how that power will be distributed to millions of vehicles on the road. Today that number is approaching 300 million vehicles.

After all, it is one thing to power a relative few "zero emissions" cars. It is something altogether different when all of those cars are trying to plug in to power up in the same manner as vehicles do at gas stations today. (By the way, the average gas station services 2,000 cars in a typical 12 hour period).

A Canadian, David Booth, recently took a hard look at the "unseen" reality of the electric car future and he offers some inconvenient truths for the zero emissions enthusiasts.

Anyone who tells you that the electric car in your future will be just as convenient as the gasoline-fueled vehicle you’re currently driving is lying. If not overtly, then at least by omission. Nor can they plead ignorance, the calculations required to reach this conclusion are hardly the stuff of graduate-level physics. Indeed, judging from the experts I’ve spoken with, plenty have been the warnings proffered to the politicians, policy makers and futurists advocating an all-battery-powered future.


The major obstacle is how those 300 million vehicles will power up when you are on the road and don't have access to a home charger in your garage. Today it takes over 5 hours for a Tesla S to fully charge on a wall charger. That works fine if you are charging the car overnight for your daily commute but it is less than ideal for longer trips.


A 120kw supercharger station drops that time. A Tesla S can be charged from zero to 100% in 75 minutes and zero to 80% in 40 minutes.  However, that is a far cry from the two minutes it takes to fill up your car at a gas station.

However, right now there are only 828 supercharging stations in the entire world with just over 5,000 charging points.  That will undoubtedly grow with time but what about the charging times and the "unseen" power requirements?

Booth has done the math and in order to fully charge an electrical vehicle in 2 minutes to drive 300 miles, it would require a 3,000 kw (3 megawatts) charging station. That is 25 times more powerful than what exists today. A 350kw charger could do it in 20 minutes and these might be on the horizon. However, this is what Booth says about that possibility.

The 350kW rechargers required for those promised 20-minute refueling is, according to the experts I spoke with, likely the upper limit of the equipment we humans will ever be allowed to handle. In fact, these 350kW rechargers generate so much heat, their amperage is so incredibly high, that the cables carrying all that current need to be liquid cooled. And anything that can recharge our batteries faster than 20 minutes will have to be automated, i.e., phantasmagorically expensive.

Of course, all of those charging stations will need electric power. Electric generation power that does not exist today for 30 million electric vehicles let alone 300 million.

To replace the average gasoline station with equivalent charging capabilities you would need 30 megawatts of power. That is the same amount of electricity that a city of 75,000 people currently uses. Where does that energy come from and what is going to generate that "unseen" power?

Oh, and by the way, all that electricity, unlike off-hour home recharging, happens during peak-usage daylight hours.

In other words, all that extra power, at least for intra-city travel, will have to come from new — not existing — sources. At the most optimistic prices posited for the future cost of solar panels — about a buck a watt — that’s another $30 million. If you want to go the windmill route, you’ll need 10 of them, each costing roughly $4 million. Just as further reminder, that’s for each and every roadside station. And for those thinking there may be some breakthrough in the future that will allow faster recharging, know that while battery technology is in its infancy, electricity generation is a mature technology and the laws of power transmission are likely to remain pretty much immutable.


This does not even consider the time it takes to get a new power plant approved (environmental permits, community complaints etc) and built. These timeframes are often measured in decades, rather than years.

I have no doubt that human ingenuity and innovation will provide advances in this area that are not imagined right now. My guess is that many of these are "unseen" today.  We may very well develop new technology that makes vehicular travel "zero emissions".

However, I think it is unlikely to result with any extension of the technologies that are "seen" today. It is more likely that something that is completely "unseen" today will get us where we need to be.

In the meantime, it seems quite foolish to try to legislate and regulate the internal combustion engine and the fossil fuel industry out of business. It has provided us a convenient, efficient and economical system of transportation that we have enjoyed for over a century.

There may come a day when it has "seen" better days. However, that day remains "unseen" right now.

There are just too many "unseen" issues lurking in the background regarding electric vehicles no matter how hard the left wants to ignore them.