Every day we hear some politician tell us that carbon emissions have to be eliminated to save the planet. Some days we even hear 16 year olds telling it to the United Nations.

We need to ban coal, oil, gas and anything powered by these carbon sources.

We need to ban nuclear as well even though it is the one energy source that actually can replace carbon fuels cost effectively.

We need to stop eating meat.

Some are even arguing that we need to stop having children to help solve the problem. 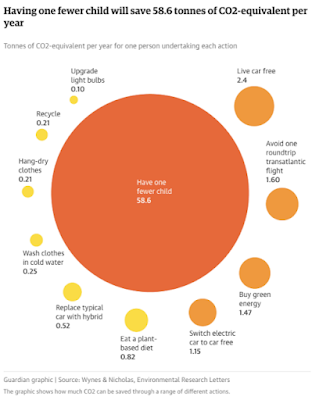 We hear all of these things but we never hear some simple facts to assess whether any of these claims make any sense at all.

Let's look at a few facts to put this issue in context for you.

How much CO2 is actually in the atmosphere? Since we hear about it all the time you would think that it must be a large and growing amount.

CO2 is actually less than .04% of our atmosphere.

Of that amount of CO2, how much do scientists state is coming from man-made causes? After all, there is a tremendous amount of CO2 in the atmosphere occurring naturally since it is the essential building block for plant life on the planet.

Only 3% of CO2 is attributed to human activity.

In other words, everything we hear about climate change, the Green New Deal and the arguments that we need to fundamentally transform our society and economy is about something that represents just 3% of .04% of the atmosphere.

Let me do the math for you.

We are talking about something that is just .0012% of the entire atmosphere.

Take a step back and think about this logically.

You don't have to be a scientist to wonder how it is that something so small can overwhelm everything else that is going on in nature.

Does it make any sense at all that this infinitesimal amount of human-related carbon emissions in the atmosphere could have any discernible effect on the climate?

These facts are contained in an excellent SkyNewsAustralia report by Alan Jones that you can view on this YouTube video. Jones also has an interview in the video with Dr. Nils-Axel Morner who is the former head of the Paleo-Geophysics and Geodynamics department at Stockholm University.


Morner is one of the world's leading experts on sea levels and also chaired that group for the United Nations Intergovernmental Panel of Climate Change. Morner resigned his position on that panel when the group would not admit that sea levels are not rising and that the politically-backed theories being pushed by the panel are not supported  by science.

Morner argues that the entire climate change carbon dioxide hypothesis is wrong and the vast amount of physicists, geologists and meteorologists in the world know that. He believes that all of this will be revealed within the next decade or two as a sun-driven cooling period proves all of this is a hoax. His concern is that science will be totally discredited by that time which is why he is speaking out so forcefully now. He has  spent a lifetime committed to science. He does not wish to see science discredited because people who say they are scientists actually have a higher allegiance to politics ( and government funding) than they do to science.

Consider further that the United States represents just 13% of the man-made carbon emissions in the world. By comparison, China is responsible for 29% of global carbon emissions.

Because of that the Democrats want to spend trillions of dollars, destroy our economy and make you live your life as if you are in the 18th century as part of a Green New Deal?

You don't have to be a scientist to understand that the math just does not add up.
Posted by BeeLine at 5:00 AM