I recently came across a book at my local library on the secrets to raising highly successful children. 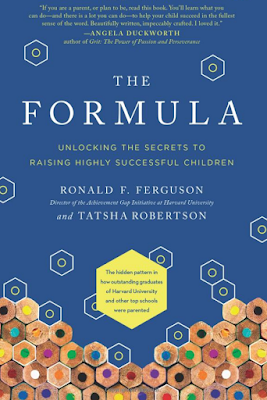 Mrs. BeeLine and I have raised our children so it is a little late for me to get a few tips. That being said, we must have done a few things right as we have three responsible, productive and successful adult children.

However, success is a topic I am interested in and I have written about from time to time in these pages. I decided to check out a copy of the book and see if there was something worthwhile therein I could pass on to my readers who still have the responsibility to make something of the next generation.

Out of this work the authors found some common themes in the parenting practices that were employed to develop successful children.

The authors identified 8 key roles that what they call "Master Parents" used in their parenting. I am going to touch on only three that I think are particularly important.

The first role that is critical in raising a successful child is being an early-learning partner. Successful children generally have had a parent (or another loved one) who spends a lot of quality time with the child in teaching them in one-on-one activities before they begin kindergarten. They spend time reading, working with numbers, playing mind games and building things with them.

Many of these children can read or do simple math problems before they enter kindergarten. As a result, they are ahead of other children when they go to kindergarten and this feeds their self-esteem and confidence. They like the attention they receive for their knowledge and they are inspired to learn more. This generally feeds a life long love of learning in these children. Once that base is established the parents do not need to spend much time pushing their child to learn---it is a natural result.

The first five years of a child's life is the most critical period for learning. Human infants have basic instincts but they don't learn without a parent's help. Those first five years are a period of immense "developmental plasticity". Children are especially sensitive to stimuli during this time and learn most easily.

The reason for this is that this is the time that the you have the most myelin in your body. Myelin is the substance in your body that surrounds neural pathways. When you learn a task or skill myelin is released and insulates those pathways. When you learn something or practice a skill the myelin is what allows you to retain what you learned and recall it when you need it. Because young people have so much to learn between birth and age 5 (walking, talking, etc) there is an enormous amount of myelin available to them. In fact, it is estimated that someone in this age group has 10 times the myelin that a 60 year old will have. There is a reason why it has been said "that you can't teach an old dog new tricks."

It is critically important to imprint the right lessons, habit and values in a child in those first five years. A child needs a dedicated early learning partner to do that. The role of the parent as the early-learning partner is probably the most important on the eight key roles identified in the book.

Once the child enters school the small social system that centered around the home and parents gives way to an expanded universe. The parents no longer exert the control that they once did over the child.

This new social system can introduce problems. Teachers that don't understand the child or peer groups that are bad influences. The hope is that the values and habits the child has learned at home can carry them a long way outside the home. However, at times these external forces get in the way of your child's success.

That is why the "master parent" is prepared to collaborate with the adults in the child's social sphere to make sure he or she does not get off the flight path that has been developed. If necessary this may require the parent to make demands and assert their authority as a parent to manage and correct the situation.

Notice that there is a big difference between the role of a flight engineer and what is popularly known today as the "helicopter parent" that is always hovering around the child.

The flight engineer sets the navigation path for the child and monitors whether the child is adhering to the path. The master parent is not hovering over every detail. They are not making sure that the child is up and dressed for school. They set the expectation and stand back. They spend their time in instilling the right lessons habits and values early. They get actively involved only when a course correction is necessary.

One of the first blog posts I wrote was about Amy Chua the book "The Battle Hymn of the Tiger Mom".

Asian parents tend to have a much more authoritarian view when dealing with their children than American parents. Put simply, they believe they know what is best for their child and there is no room for debate.

Chua put it this way in a Wall Street Journal essay "Why Chinese Mothers Are Superior" back in 2011.

A lot of people wonder how Chinese parents raise such stereotypically successful kids. They wonder what these parents do to produce so many math whizzes and music prodigies, what it's like inside the family, and whether they could do it too. Well, I can tell them, because I've done it. Here are some things my daughters, Sophia and Louisa, were never allowed to do:

Western parents are too concerned about their children's self esteem.  Chinese are not. Asians assume strength in their children, not fragility.  Therefore, they push hard on them and hold them accountable for results.

Chinese parents believe their children owe them something.  Many Americans seem to believe that since they were responsible for bringing the child into the world that they owe the child in some way.

The book acknowledges the success that many Asians have had with this parenting style. However, the authors believe that a master parent will have more success being a negotiator than an authoritarian with their child.

They argue that it can get you to the same place by inspiring your child rather than by more aggressively requiring it.

As an example, the book cites the example of a family which was deeply committed to music. All of the children played musical instruments and the family expected them to be excellent at it. Rather than requiring them to play the piano or violin they gave their children a choice of string instruments.

They also were put on a routine of rising every morning at 515am so they could practice for an hour beginning at 6am. As they got older they wanted to sleep in and asked if they could practice later in the day. The mother explained that she did not think they would like to practice after school but she gave them the choice so they could sleep in. However, she made clear the amount of work would not change, just the time of day. It did not take long for the children to realize that their mother was right. It was worse having to practice later in the day than early in the morning. This would be a parent as negotiator rather than authoritarian. A Tiger Mom would have not even allowed the child the option to practice after school.

These are all of the Master Parent roles outlined in the book that make up "The Formula" for raising highly successful children.


One thing we need more of in the world are better parents.

Pass this along to anyone who might benefit and have them check out the entire book.