Turn on the news and what do you hear?

I am often asked what will come of all of this.

Do you know what was similarly incessant three years ago?

The Access Hollywood tapes that were meant to take down Trump.

Those tapes were released exactly three years ago today (October 7, 2016).

Every political pundit and media mouthpiece said it was the end of Trump.

The RNC Chairman, Reince Prebus, urged Trump to drop out of the race.

However, one month later Trump was elected President of the United States.

Despite the fact that many high profile people in the Republican party walked away, Trump withstood the storm and was standing higher on the other side at the end of the day.

How was that possible?

There are lessons from three years ago on how to analyze where all of the impeachment talk is likely to go.

To be successful in taking out a politician you need three things to occur.

They must lose the popular support of the people.

They must lose the support of their political party.

They must fail to zealously defend themselves against the attack.

How did Trump survive the Access Hollywood tapes when so many wrote him off?

He lost a fair number of establishment political figures. People like Mitt Romney, John McCain and Paul Ryan cut and ran after the tapes surfaced. However, he did not lose grassroots support in the party. He maintained the popular support of the people.

As mentioned above, the RNC wanted Trump to drop out right after the tapes came out. They pulled their institutional support in the immediate aftermath of the disclosure. Were it not for the steadfast popular support of the people, the RNC likely would have totally walked away from Trump. The popular support prevented that from happening and the RNC brought its resources back in for Trump for the final push to the election. In the end, Trump maintained the support of the Republican party.

It goes without saying that Trump never plays traditional defense. Trump only plays offense. Therefore, when the allegations were made what did Trump do? He did not sit back and take it.  He did not even attempt to defend it. He went out and got all the women who had accused Bill Clinton of sexual misdeeds and held a press conference with them right before his second debate with Hillary. This was a mere three days after the tapes had been disclosed. He then seated them in the debate audience as his guests.

Contrast all of that with what caused Richard Nixon to resign as President in 1974 when faced with an impending impeachment vote in the House of Representatives.

Nixon had lost the popular support of the people by the summer of 1974. His overall approval rating was lower than 30%. He was starting to drop below 50% approval with Republicans. 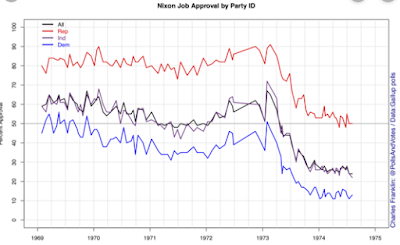 Nixon ultimately decided to resign when he was told by GOP leaders in the House and Senate that his support by Republicans in both Houses of Congress had evaporated. He was certain to be impeached in the House and it was likely that a majority of Republican Senators would not vote to acquit him in the impeachment trial.

Nixon resigned when faced with those formidable strikes against him. He did not even attempt to defend himself. Three strikes and Nixon was out.

Compare that to the Impeachment of Bill Clinton in 1998.

Clinton was impeached in the House of Representatives on two articles---lying under oath and obstruction of justice. Two other articles of impeachment failed to get majority votes in the House.

Only five members of Clinton's Democrat party voted for one of the impeachment charges.

Not one of the 45 Democrats in the Senate voted to convict Clinton. 10 GOP members voted Clinton 'not guilty' on the perjury charge and 5 on the obstruction charge. Those voting 'guilty' were far short of the 67 needed to convict.

Clinton had the support of almost everyone in the Democrat party throughout the process.

Clinton also maintained popular support with the public. Clinton's approval ratings never faltered during the entire impeachment process. His support among Democrat voters was particularly strong. This should have been a clue to Republicans that they were on a fool's errand. If the voting public is not behind you, you have nothing. 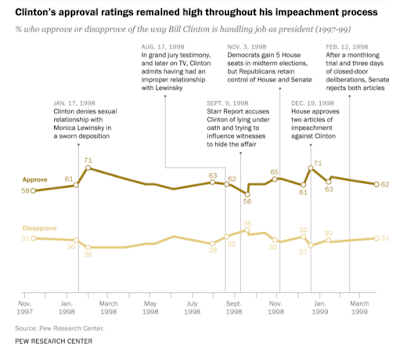 Of course, Clinton and his advocates also put up a strong defense. This was nothing except sex. In effect, they were saying that everybody lied about it. Why impeach Clinton for lying about the sex?

Looking at the polls, it worked.

Where will all of this go with Trump?

If the GOP base stays with him it will be difficult for many GOP officeholders to also not support Trump.

One thing we don't have to wonder about is how zealously Trump will defend himself. You can be sure that he will leave no stone unturned. If the Democrats have any skeletons in their closets they better make sure they are locked very tightly. As I stated above, Trump believes that the best defense is a good offense.

There is one other thing to consider in all of this that should make Democrats nervous in trying to take on Trump.

I am currently reading the book, "Team of Vipers" which was written by Cliff Sims, who was formerly a Special Assistant to the President under Trump in the first two years of his term. Sims largely was involved in messaging initiatives for the Trump campaign and administration. 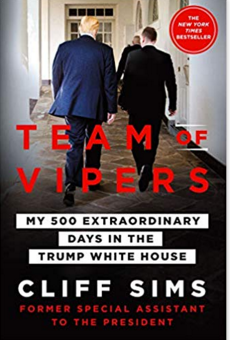 I think it is a pretty fair and balanced look at the Trump White House from one person's perspective. The title comes from the infighting Sims saw while there, most particularly between the Trump loyalists and the RNC and GOP political operatives who held many White House jobs.

Sims was not a Trump supporter from the beginning. However, he signed on in late August, 2016 to assist in messaging for the general election campaign. He left his home and his political communications company in Alabama to work for Trump. As a result, he was much more a Trump loyalist than a D.C. swamp creature. However, he is not a Trump apologist in the book. That may be one reason that Trump is suing Sims for violating a non-disclosure agreement he signed. He has good and bad things to say about a number of people--including himself.

In the book he recounts the day during the campaign that the Access Hollywood tapes were released. Sims, like everyone else, could not see a way out. Conventional political wisdom said that Trump was finished. You can imagine what Sims felt like. He had left his wife in Alabama to move to New York City to work in Trump Tower. Most of his friends thought he was crazy to do so. He now saw his career gamble coming up ZERO.

To escape the doom, depression and despair in the Trump campaign war room, Sims went to the mostly empty 5th floor of Trump Tower which was used in filming The Apprentice. It was there that he ran into Trump who was there to use a set on that floor to tape a response to the escalating negative press.

Sims remarked that he could not believe how cool, calm and collected Trump was despite the storm around him. Sims remarked in the book that Trump is often portrayed as erratic, unpredictable and impulsive. There is no doubt there is some of that in him. However, Sims says that Trump "is the most methodical, patient person I have ever seen in the midst of a crisis---the eye of the storm."


Sims makes one other point about Trump that I thought was interesting in evaluating how he might stand up to the continuing talk of impeachment. Sims says that he has never seen anyone better in operating in conditions of chaos than Trump. Trump also understands that about himself. Therefore, Trump sees that he is at an advantage compared to adversaries or those he is negotiating with when chaos ensues "because he's more comfortable in the mayhem than anyone else."

Where does all of this talk of impeachment go from here?

However, this much I do know. Trump has already proven he is not easy to strike out. He also will keep swinging to the end whatever may come.

Keep these thoughts in mind as the news plays out.