Sitting Longer In That Tree

Most people in the world are getting married later in life than they used to.

It is generally true that marriage ages are later in more economically advanced countries and earlier in developing countries. Part of the reason for this is that women have greater career opportunities in more advanced economies today.

The chart below shows the median ages for marriages in the United States since the late 1880's. Note that people married the youngest in the 1950's and 1960's. I would have thought that people were marrying even younger at the turn of the century. That was not the case. 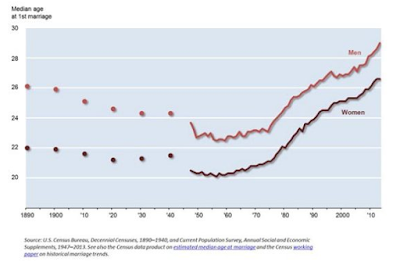 Of course, later marriages also affect the fertility rate in a country as the older a woman is the less likely she will bear children.

As I wrote in a blog post earlier this year, there is a direct correlation between maternal age and fertility. There is a downward rate of fertility beginning at age 30. It takes a very sharp dive after age 35 as this chart from The Women's Eye website shows. 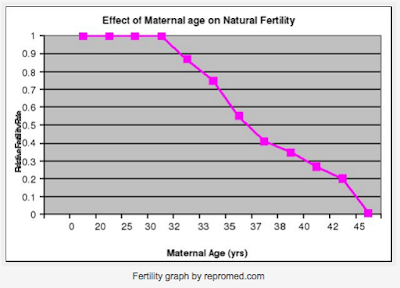 I recently came across an interesting chart that compares marriage ages around the world.

As you can see, it varies considerably. 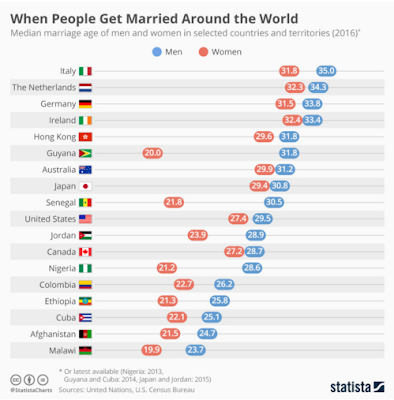 Men are not marrying in Italy until age 35.

The largest age gap between men and women is in Guyana---almost 12 years. 32 year old men are marrying 20 year old girls.

The youngest brides are in Malawi---not quite 20 years old.

Look how those marriage ages also affect fertility rates in some of these countries.


Of course, trying to draw a correlation between the later marriage age of women and the fertility rate in the world we live in today is a little foolish .

Who said you have to be married to have a child?

There are not many people left in the world who seem to believe it other than in South Korea, Japan, Turkey, Israel and Greece.

The United States is much better than many other countries but the percentage of out-of-wedlock groups varies quite a bit by ethnic and racial group. 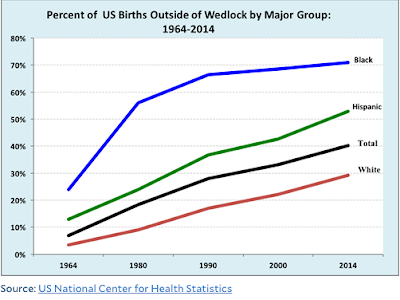 Does anyone remember the old schoolyard taunt that kids sung out on the playground if it appeared any boy liked a girl or vice versa?

Yes, it is probably banned today because it only speaks to heterosexual relationships.

However, if it does survive it no longer requires the fourth verse.

Marriage seems to be further and further in the future for many of those in school today.
Posted by BeeLine at 5:00 AM