FICA Is Foreign To Some

Did you know that a program exists to allow American companies to hire foreign workers at a substantial discount to U.S. citizens?

This program allows the employer to not have to pay and collect FICA taxes on foreign employees.
You know, the taxes that are necessary in order to keep Social Security and Medicare solvent.

The discount is not insignificant either. On a $60,000 salary the tax exemption for hiring the foreign worker potentially saves the employer almost $10,000 compared to the American worker (split evenly between employer FICA taxes and lower wages required to be paid to the foreigner).

How is this possible?

It is part of a program called Optional Practical Training (OPT) and is designed to extend the F-1 visa given to foreign students attending U.S. colleges through a work period. It provides the foreign student  ability to stay in the country after receiving their degree and gain employment experience after graduation. The general rule is that this exemption applies for one year after college. However, during the Bush administration the exemption was expanded to 3 years for STEM graduates.

Students with F-1 visas also are not subject to FICA taxes as long as they do not work more than 20 hours per week. This also allows foreign students the ability to work but not have FICA deducted from their paychecks or require their employers to pay it on their behalf.

Like many government policies, you can argue the original intent behind the exemption was well meaning. If a student came to the United States to go to college, and was going to eventually return to their home country, it did not seem fair to make them contribute to a Social Security and Medicare program they would not benefit from in the future.

However, the reality today is that many of these graduates use the OPT program as a gateway to having their employer apply for an H1-B visa for them which then allows them to stay in the United States for up to an additional six years. Of course, that then leads to the immigrant eventually trying to get their green card for permanent status in the United States and possibly citizenship.

Who is the loser in all of this?

First, the U.S. college graduate who is competing for the same job but would cost the employer more money to hire. Furthermore, once the foreign college graduate gets the job and gets the work experience over the U.S. graduate, it is hard for him or her to catch up. If they do get a job it will undoubtedly be at reduced pay compared to what they otherwise should receive. The OPT necessarily will depress overall wages.

We are not talking about small numbers here.

There are more than 1 million students in U.S. colleges with F-1 visas. 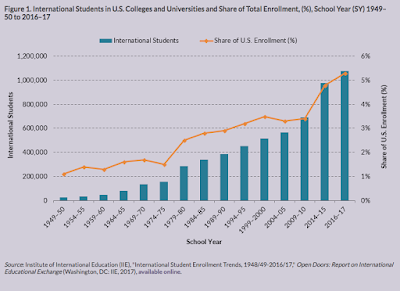 As you can see, there was a gigantic increase in international students during the Obama administration. This has leveled off under President Trump but we are still talking about large numbers of students.

China accounts for one-third of all international students in colleges today. It was lower than 10% in 2006.

That is a large potential revenue drain not to mention the negative effects it has on the job prospects of U.S. students.

Let's not forget that it is reported that 45% of all graduates in Millennial and Gen Z generations are underemployed. At the same time, they are burdened with enormous amounts of student loan debt( at last count $1.6 trillion).

Who is reaping the benefits beyond the foreign students?

Let's look at the largest employers of those in the OPT program. I am showing the top 10 below. You can see the top 200 employers at the ICE.gov website.

These are not small numbers either.

OPT has gotten so big that there are now more immigrants working under this program than under the more popularly known H1-B program for specialized immigrant workers. The use of OPT has actually grown by 400% over the last several years. A big reason is that there is no limit to those under OPT. There is for H1-B visas.

This is how one commentator describes what is really going on with the OPT program to the benefit of the foreign students and large U.S. companies and to the detriment of young American graduates.


Since they get that on-the-job training, their employers are likely to offer them full-time jobs (by applying for their H-1B visas), once again leaving American graduates out of the training-to-jobs process.

Critics contend that businesses use OPT for the cheap labor, just as they use the better-known H-1B guest worker program.

Companies start out grooming low-wage workers while they’re on F-1 visas. Then, the same companies turn around and say they need foreign workers because Americans don’t have the skills they need – when those companies are responsible for excluding Americans from the training and the jobs.

OPTs are foreign workers getting tax-free training, while still on F-1 “student” visas.

In this “try-before-you-buy” arrangement, American businesses then apply for the workers’ H-1B visas, with an understanding that the workers will continue working at a lower wage in exchange for the H-1B, then the hope of a future Green Card and then citizenship. So much for the “nonimmigrant” part.


Don't get me wrong. I am all for retaining the best and the brightest who are educated at our colleges and universities for jobs in the United States. I would much rather see our immigration policy skewed towards these talented immigrants compared to a flood of unskilled and uneducated people illegally crossing our border.

However, it should not be done at the expense of U.S. students and U.S. senior citizens.

Furthermore, the OPT program as it exists today was never even the subject of a vote in Congress. It is in place solely because of  administrative rule.

If you needed one more example of how broken our immigration policy you now have it.

What exactly is Congress doing about it?

They are trying to drive the one guy out of office who is really interested in fixing the immigration problem.

Such is the way that Washington works.
Posted by BeeLine at 5:00 AM