One of the most interesting facets of the Covid-19 pandemic is the incredible divide between what people think and the actual facts of our current reality.

It is a textbook case of the power of the media and of propaganda in shaping people's emotions, attitudes and beliefs.

Early on when the first impacts of Covid-19 were being felt (March 12, 2020) I warned about the fallibilities of humans in dealing with what we were facing.

There are two fundamental truths about human beings that I always keep in mind.

First, the natural human condition is to be a conformist. People do not generally like to separate themselves too far from the herd.

Second, there is nothing more contagious than fear.

We are seeing both in vivid detail right now.

I think you could fairly say that we are into a 4-D technicolor version regarding our reaction to Covid-19 about now.

On that same day I wrote the passage above a psychiatrist had just made a tv appearance in New York City when he entered the green room just off the studio to speak to the next guest who was going to talk about the emerging pandemic. The two had a brief conversation as recounted by Jeffrey A. Tucker in a recent article, "When Will The Madness End."

A thin, wise-looking bearded man with Freud-style glasses sat down across from me, having just left the studio. He was there to catch his breath following his interview but he looked deeply troubled.

“There is fear in the air,” I said, breaking the silence.

“Madness is all around us. The public is adopting a personality disorder I’ve been treating my whole career.”

“I’m a practicing psychiatrist who specializes in anxiety disorders, paranoid delusions, and irrational fear. I’ve been treating this in individuals as a specialist. It’s hard enough to contain these problems in normal times. What’s happening now is a spread of this serious medical condition to the whole population. It can happen with anything but here we see a primal fear of disease turning into mass panic. It seems almost deliberate. It is tragic. Once this starts, it could take years to repair the psychological damage.”

I sat there a bit stunned, partially because speaking in such apocalyptic terms was new in those days, and because of the certitude of his opinion. Underlying his brief comments were a presumption that there was nothing particularly unusual about this virus. We’ve evolved with them, and learned to treat them with calm and professionalism. What distinguished the current moment, he was suggesting, was not the virus but the unleashing of a kind of public madness.

As I have also written before, the drumbeat of repetition by the media can be extremely dangerous in that it can trigger the "illusory truth effect" in humans. This is the fundamental principle that underlies propaganda. Simply stated, the more often we hear something the more likely we are to believe that it is true---even if it is a complete fabrication.

All of this is useful perspective in considering the results of recent research by Franklin Templeton and Gallup to understand the behavioral response to Covid-19 and the perception of risk. Franklin Templeton is an investment firm so they were examining this subject to determine how this all relates to the pricing of that risk in the marketplace and the "safety premium" various individuals might pay for various purchases.

This is the major conclusion of that research.

We find a gross misperception of COVID-19 risk, driven by partisanship and misinformation, and a willingness to pay a significant “safety premium” that could affect future inflation.

Let's look at some of the results of the research.

These are the comments made in the survey about these findings.

Six months into this pandemic, Americans still dramatically misunderstand the risk of dying from COVID-19:

On average, Americans believe that people aged 55 and older account for just over half of total COVID-19 deaths; the actual figure is 92%.

Americans believe that people aged 44 and younger account for about 30% of total deaths; the actual figure is 2.7%.

Americans overestimate the risk of death from COVID-19 for people aged 24 and younger by a factor of 50; and they think the risk for people aged 65 and older is half of what it actually is (40% vs 80%).

What is most telling is the following chart that compares the % of those in each age group who say they fear the health consequences from Covid-19 compared to the actual mortality data.

For those in the age 18-24 demographic, the share of those who fear serious health consequences is 400 times higher than the actual mortality data!

The only group that realistically understands their actual risk profile are those age 65+.

How could this be the case except for sensationalized and politicized media coverage that is not putting the "facts" in context?
I thought it was interesting that the research survey also came to the following conclusion as to where most of the misinformation was coming from and who was most misinformed about the facts.
For the last six months, we have all read and talked about nothing but COVID-19; how can there be still such a widespread, fundamental misunderstanding of the basic facts? Our poll results identify two major culprits: the quality of information and the extreme politicization of the COVID-19 debate:
People who get their information predominantly from social media have the most erroneous and distorted perception of risk.
Those who identify as Democrats tend to mistakenly overstate the risk of death from COVID-19 for younger people much more than Republicans.
What is most troubling is that all of this has "real world" effects that are largely being ignored. The fears that the psychiatrist voiced last March have really come true.
For example, consider this recent CDC data that indicates that over 25% of those ages 18-24 have seriously considered suicide in the last 30 days!
75% in this age group report one or more mental or behavioral health symptoms over that period of time.

I don't think I have seen anything so troubling in a very, very long time.
Notice that the % of those seriously considering suicide of those age 65+ is 2.0%
What are we doing to our young people with our the response and reporting surrounding Covid-19?
Has there ever been a greater disconnect between fear and facts than what we are witnessing right now?
Let's put the facts in a little better context.
An interesting fact is that there about the same number of Americans age 24 and younger as there are age 65 and older---approximately 105 million in each group.
If we look at those age 24 and under, there have been 292 total reported deaths from Covid-19 thru 8/12/20 per CDC data.
For those age 65 and older, there have been 118,548 reported deaths.
That would place the risk of dying from Covid-19 of those 24 and under at 1 in 359,589.
The risk for those age 65 and older is 1 in 886.
In the chart below are the one-year and lifetime odds of deaths by selected causes of injury based on 2018 tables.
I would like for young people to pay particular attention to the lifetime odds column as they have most of their lives ahead of them. This is probably the best metric to assess risk from these causes for younger people. I hope you can put any concerns you have about Covid-19 in better context by looking at these facts.
Dying from a lightning strike? Being bitten by a dog? Falling on stairs? Dying in a fire? Compare those odds to the 1 in almost 360,000 related to Covid-19 right now.
You may want to avoid looking at the numbers involved in auto accidents. You may never want to ever get in a motor vehicle again. Or be near one as a pedestrian for the rest of your life.

I have written before about the following book that was written in 1842. This is a picture I took of the copy I have in my library. 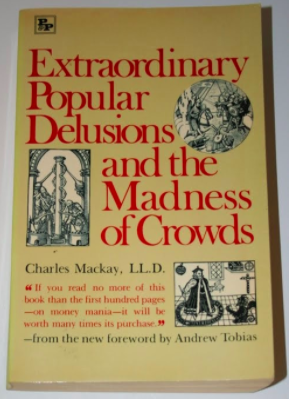 Its lessons are well known in explaining what happens to the masses when they get swept up in markets with investment manias on the upside and panic selling on the downside.
It could just as easily be used to explain what we are seeing right now.
I think this quote in the book from Charles Mackay is especially appropriate.

"Men, it has been well said, think in herds; it will be seen that they go mad in herds, while they only recover their senses slowly, and one by one.”

Beware of the herd.
Choose facts over fear.
Consider the sources that you "rely" on for those "facts".
Share the facts in this blog post with people who might find it helpful.
Doing this I hope that we will see many recover their senses speedily rather than slowly.
We simply cannot stand by when so many people (especially those between 18-24) are letting fear control their minds rather than facts.
Posted by BeeLine at 10:08 PM