Many people are asking me what I think of Joe Biden's selection of Kamala Harris as his VP running mate.

Let's start with her name first.

If you heard Joe Biden make the announcement this week you might think her name is pronounced as CAMM-A-LA. After all, he selected her, so he must know her name? That is how Good Old Joe pronounced it.

Biden might want to practice that pronunciation before he comes out of his basement.

Kamala Harris seemed to me to be the only obvious choice for Biden as his VP pick since he stated he was going to pick a woman ( and later, a woman of color). In doing so he pretty much backed himself into a corner with few realistic options that voters would consider qualified to serve a heart beat away with a 78 year old man as President.

It appeared his short list only included two names- Harris and Susan Rice who is a woman who has never run for elective office and had the added liability of being at the center of what looks like the Obamagate coup attempt on the Trump campaign and Presidency.

As it is, Biden still ends up with a first-term Senator as his running mate who was not able to stay in the race long enough to get to the Iowa caucuses as a Presidential candidate on her own.

I wrote over a year ago that I thought that Harris was the likely favorite of the Democrat establishment for President even before the campaign began in earnest.

I don't know who is going to win the Democrat nomination for President but I believe I know who the Establishment Democrats and Mainstream Media are backing.

You can expect that candidate to receive the most glowing reviews and the candidate who will get the most protection from the media.

Her name is Kamala Harris.

Why do I say that?

For Democrats, she is the candidate that checks the most boxes. When I refer to Democrats in this instance I am talking about the Democrat establishment and the media that amplifies their message. I am not talking about voters.

✓ Not too old or too young.

Harris is 55. It is hard to imagine that the Democrats want to nominate someone like Biden, Sanders or Warren who are all over age 70. The Democrats have traditionally fielded the younger candidates for President. It is also hard to believe that the Democrats would be comfortable nominating one of the under-40 group of Buttigieg, Gabbard or Swalwell. Harris is right in the sweet spot on age.

Democrats are heavily dependent on the women's vote. They particularly need to turn out the vote for young women and single women. The defeat of Hillary Clinton and the opportunity to have the first woman President was a tremendous disappointment for many women. The Democrats clearly want to have a woman leading the ticket in 2020. Harris checks that box.

✓ She is a minority.

Harris is the daughter of an Indian mother and Jamaican father. Harris identifies as an African-American which has caused some to question how valid that characterization is. Her background gets more complicated when it is considered that her father's grandmother was reportedly the product of a man who was a slave owner in Jamaica and Harris spent a great deal of her childhood in Canada. In a Democrat primary race against two old white guys, and a white woman who for 35 years claimed she was an American Indian, you can't underestimate how attractive that makes Harris as a candidate. She may be hard to classify but she clearly is a minority candidate.

✓ She is the child of two immigrants

As I mentioned above, Harris the child of a mother who immigrated from India who was a research scientist and a father who immigrated from Jamaica who was an economist. Her parents were both pursuing graduate degrees at UC-Berkeley and met while participating in protests and demonstrations on campus during the 1960's. A child of two immigrants and liberal activists to boot? It does not get any better than that for a Democrat primary candidate in 2019/2020. It also makes for a compelling counter-narrative to President Trump's immigration views.

✓ She is a California liberal.

In the primary it helps to be from California because that state will have the most delegate votes at the Democrat convention. California has 495 delegate votes. That is nearly twice as many as the next state. California has also moved its primary date up to March 3 which is much earlier in the process than it has been in the past. Harris should be at an advantage if she can survive the early primaries. She also probably has the best chance to benefit from the large amount of California donors that make up the core of Democrat fundraising.

Harris is not just a liberal, she is a California liberal. That means she is generally much further left than most other Democrats. In a year in which it seems that being far left is important, Harris is unquestionably much further left than most other candidates . For example, the left wing website ProgressivePunch.org ranks Harris as the third most liberal U.S. Senator, trailing only Ed Markey (D-MA) and Elizabeth Warren (D-MA).

GovTrack.US ranked Harris as the fourth most liberal U.S. Senator in 2018. This chart graphically shows just how far left Harris is compared to her Senate colleagues.

Kamala Harris checks all the boxes the Democrat operatives and the media want.

She is sure to get a lot of favorable press and favorable endorsements as we move forward.

However, will Democrat primary voters buy what she is selling?

As the campaign and Democrat debates progressed it was clear that not many people were buying what Harris was selling.

I saw early on that the biggest problem that Harris had in the debates was that she just seemed very unlikeable.

At one point in the debates she tried to resurrect her fortunes by essentially calling Joe Biden a racist.

In a later debate Tulsi Gabbard effectively ended any hopes that Harris had by pointing out some of the questionable things she did as Attorney General of California.

In addition to calling Biden a racist, Kamala Harris was one of the few Democrats to come out and say that she believed the women who have come out and stating that Joe Biden was inappropriate with them.

It makes you wonder why Kamala Harris would want to have anything to do with a man she has essentially called a racist and a pervert, doesn't it?

This is at the core of probably the most common criticism that I have heard about Harris.

She is said to be an opportunist that will do most anything to further her ambitions. Those allegations date back to the 1990's when the 30-year Harris was the girlfriend of the 60-year old Speaker of the California House, Willie Brown. Brown appointed Harris to two high-paying patronage positions while they were dating.

The relationship with Brown and the the appointments helped to launch the political career of Harris in which she was elected District Attorney for San Francisco in 2003 and later California's Attorney General before running for the U.S. Senate in 2016.

The "opportunist" label was also fed by how Harris seemed to shift positions on a number of issues while she was running.

This is what Politico says about Harris and her shifting positions.

Harris’ shifting positions on key policy matters undermined her short-lived run for the presidency. A former California attorney general and district attorney, Harris faced criticism over a prosecutorial record that doesn’t always match with the progressive positions she espouses today. On health care, her waffling on “Medicare for All” during the presidential primary revealed a candidate torn between appealing to progressives demanding structural change and moderates favoring incrementalism — and satisfying none in the process.

There seems little doubt that if anyone needs a VP who is ready to serve from day one it is Joe Biden who will be 78 years old should he assume office. Let's put that age in context. No President has been that old when they left office let alone when first elected. Ronald Reagan was 77 years old when he left The White House after two terms in January, 1989.

In a recent Rasmussen survey, 59% of likely voters do not believe Joe Biden will serve out the full four years of his term if elected in November.

49% of Democrats believe that.

Why is Joe Biden heading the ticket?

Is Kamala there to help Biden?

Or is Biden merely being used to put the candidate that Democrat establishment and media wanted to begin with but they couldn't get the traditional way?

The media is already busy trying to cast Kamala Harris as a champion of the little guy and and as a moderate.

The New York Times called her a "pragmatic moderate".

ABC News anchor George Stephanopoulos said that Harris “comes from the middle of the road, moderate wing of the Democratic Party.”

Look at her voting record above and also consider where she stands on major issues.

While she was running for President, Harris expressed her support for the Green New Deal, Medicare-for-all, decriminalizing illegal border crossings, and for gun buybacks. She has compared ICE to the KKK and has said she wants to have a "conversation" about terrorists voting from prison. She unabashedly has supported BLM and has refused to criticize any of what is now going on in cities like Portland, Seattle, LA and New York City. She has stated that she thinks it is "wrong" to believe that "police equals more safety".

A moderate? Compared to who? Alexandria-Ocasio-Cortez and Ilhan Omar?

This is the Democrat party today.

Be very careful who and what you are voting for.

What do you get when the masks come off? 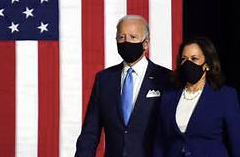