Is it Racism or Something Else? 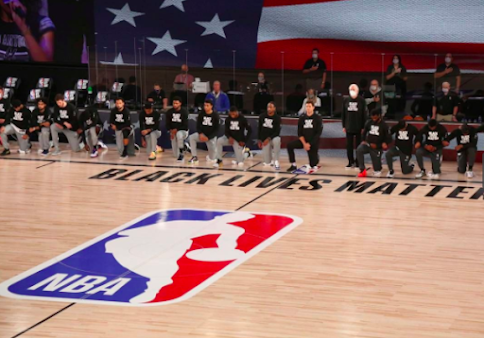 Not one player stood for the national anthem among the 22 teams in the first two games played.

All 22 teams kneeled for the national anthem before each game over the first two days of play at Walt Disney World Resort near Orlando, where the NBA season has resumed after a 140-day shutdown due to the coronavirus pandemic. Players and coaches are wearing Black Lives Matter T-shirts during warmups. Most players have replaced the nameplates on their jerseys with social justice messages such as Freedom, Equality, Say Their Names and I Can’t Breathe. They are bringing attention to the deaths of George Floyd, Breonna Taylor and others who have died needlessly at the hands of police.

75% of NBA players are Black. In 1950 there were only four Black players in the entire NBA.

At last count, there were only 36 American-born white players in a league with 30 teams (only 22 teams were invited to play in the playoffs in Orlando).

Here are the 20 highest paid player in the NBA this season. All are Black except for Gordon Hayward of the Boston Celtics. 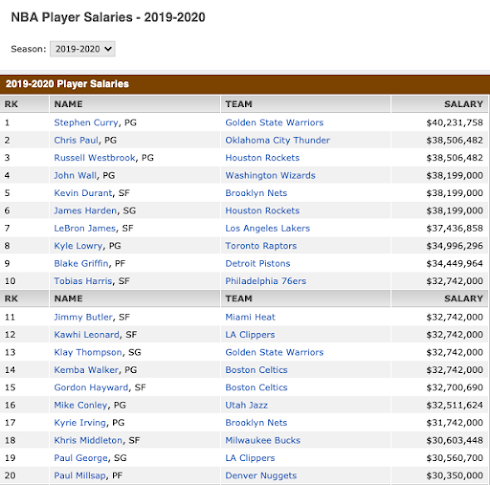 The average NBA salary this year is $7.7 million.

It is simply not possible that you could have these results if the United States of America was a racist nation.

You could also not have the election of an African American as President of the United States in a racist nation.

There is also no other nation in the world that these men would be able to earn this amount of income for playing a game.

Why then, are these players kneeling when the national anthem is being played?

This is not to say that there are not individual instances of racism or there have not been injustices towards minorities in the United States in the past.

However, protesting against the flag of the United States today, the country that has given these men extraordinary opportunities the likes of which they would have not received in any other country in the world, is difficult to understand.

That being said, there is no doubt that there are many problems that African Americans in the United States face.

The question is whether racism is the heart of the problem?

Of course, right now the narrative seems to be that racism combined with police conduct is the root of the problem. That seems to be why the Black Lives Matter movement wants to defund the police.

I often like to read the perspectives that Walter E. Williams has on a variety of issues. Williams is a Professor of Economics at George Mason University. He is also African-American which makes him more qualified than I am to talk about racism.

Williams was born in 1936 so he grew up in a period well before the Civil Rights movement in the United States. He had no father in his life. He drove a taxi and was drafted and served in the U.S. Army before he could graduate from college. Williams confronted racism every day of his life growing up.

A few excerpts from the Williams article that are fact-filled and thought provoking.

Today, being murdered by whites or policemen should be the least of black worries. In recent times, there is an average of 9,252 black-on-black murders every year. Over the past 35 years, that translates into nearly 324,000 blacks murdered at the hands of other blacks.

What is a much bigger problem for the Black community? The lack of a nuclear family structure. Interestingly, that is exactly what the Black Lives Matter movement wants to disrupt for EVERYBODY.

The most devastating problem is the very weak black family structure. Less than a third of black children live in two-parent households and illegitimacy stands at 75%. The “legacy of slavery” is often blamed. Such an explanation turns out to be sheer nonsense when one examines black history. Even during slavery, where marriage was forbidden, most black children lived in biological two-parent families. Professor Herbert G. Gutman’s research in “The Black Family in Slavery and Freedom 1750-1925” found that in three-fourths of 19th-century slave families, all the children had the same mother and father. In New York City, in 1925, 85% of black households were two-parent. In fact, “Five in six children under the age of six lived with both parents.” During slavery and as late as 1920, a black teenage girl raising a child without a man present was a rarity.

This is from the Black Lives Matter website section on "What We Believe".

We disrupt the Western-prescribed nuclear family structure requirement by supporting each other as extended families and “villages” that collectively care for one another...

I wonder how much more the black family can be disrupted?

Neither fathers or men are mentioned one time in that entire section on "What We Believe".

Williams suggests that rather than racism it is this failing that is most responsible for the problems of the Black community above all else. It has nothing to do with the vestiges of slavery or any remnants of racism in the country.

The absence of a father in the home predisposes children, especially boys, to academic failure, criminal behavior and economic hardship, not to mention an intergenerational repeating of handicaps. If today’s weak family structure is a legacy of slavery, then the people who make such a claim must tell us how it has managed to skip nearly five generations to have an effect.

Williams also does not see how tearing down statues is going to do anything that benefits the Black community.

There are problems such as grossly poor education, economic stagnation and poverty that impact the black community heavily. I would like someone to explain how tearing down statues of Christopher Columbus, Thomas Jefferson and Confederate generals help the black cause. Destruction of symbols of American history might help relieve the frustrations of all those white college students and their professors frustrated by the 2016 election of President Donald Trump. Problems that black people face give white leftists cover for their anti-American agenda.

I would add that NBA players kneeling while the national anthem is being played and putting social justice message on their uniforms is not going to do anything either.

Did anyone think that these social justice messages might have been worthwhile?