One of the standard narratives the Democrats and mainstream media like to repeat about President Donald Trump is that he became President simply because he wanted to enrich himself.

If that is the case, it is not working out very well for him.

According to Forbes, Trump was worth $4.5 billion in 2015 before he ran for President.

Forbes estimated his net worth at $3.1 billion in 2019. It is undoubtedly worth less right now considering how much of Trump's assets are in New York City and are tied to the hospitality industry and are invested in commercial real estate.

Forbes reports that Trump has dropped from the 156th wealthiest American to 275th since he became President.

Another narrative that the Democrats and mainstream media like to perpetuate is that they need to see Trump's tax returns because he might be hiding potential conflicts of interest or economic ties with foreign interests (Russians!).

As I have pointed out in the past, a tax return is a very poor vehicle to do this. Trump's personal tax returns would be very limited in understanding his entire financial picture. They would only provide details related to his specific individual items and any sole proprietor income. They would not provide any detail on income, expenses or debt on those things held in partnerships, limited liability companies or corporations. A financial disclosure form is much more informative for someone like Trump who has significant and wide ranging business interests.

All federal executive branch officeholders are required by law to file an annual financial disclosure statement. President Trump recently filed his for the calendar year 2019. It is 78 pages long and provides almost everything anyone would want to know about Trump's financial situation. You can view it yourself here.

Here are Trump's checking and savings accounts and investment in gold (very minimal considering his net worth).

Here are all of Trump's liabilities. 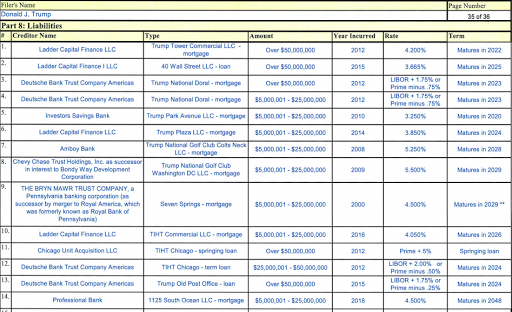 Here is an example of some of Trump's assets and the "income" associated with the assets. Note that what is reported are revenues. This should not be confused with the net income that went into Trump's pockets. These are gross sales before expenses or cost of goods sold. Trump's hotel in DC. grossed over $40 million. If he was lucky, he netted no more than 10% of that. 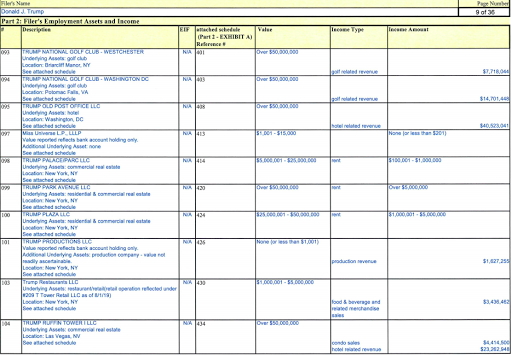 When it comes to the subject of enriching oneself as President let us now turn to Barack Obama.

When Barack Obama was first elected to the United States Senate in 2004 he was a law professor making $85,000 per year. Forbes did an analysis shortly after he left office of the income of Barack and Michelle Obama made between 2005 and 2016. 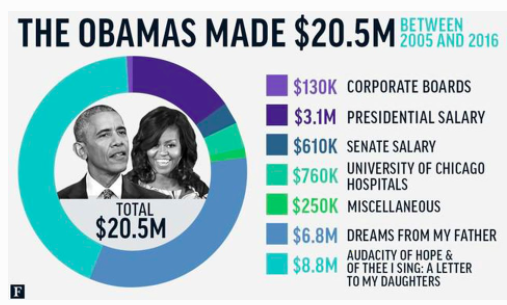 Since the Obamas are now private citizens there is no official document that tells us exactly what their income is or how much they are now worth. However, those amounts are surely small potatoes compared to what they are now bringing in.

The International Business Times estimates the Obama's net worth today at $70 million. Obama receives a reported $400,000 per speech. The couple also have a lucrative production deal with Netflix that is reported to be worth $50 million to them. There also must be a number of other revenue inflows that we don't know about.

What we do know is that Barack Obama has become a real estate baron in his own right since he left office. I am not talking about hotels, golf resorts and commercial properties like Donald Trump. I am talking about residential real estate.

Let's look at the houses that Barack and Michell Obama own.

He reportedly still owns the house that he had in Chicago when he first ran for President. Zillow currently values the house at $2.5 million. 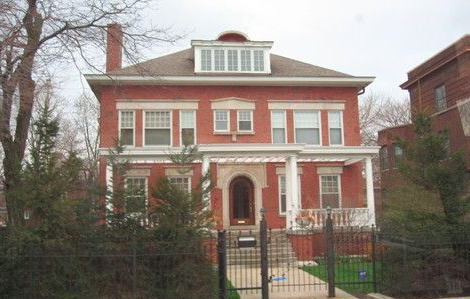 They own this house in the Kalorama neighborhood of Washington, D.C. which they paid $8.1 million for in 2017. 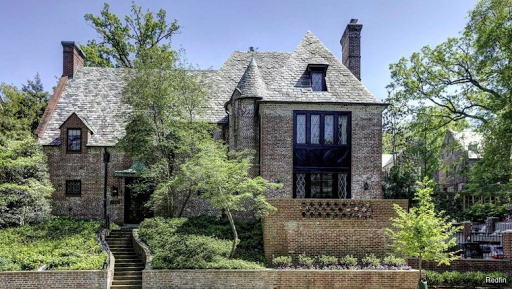 They own this home on Martha's Vineyard which they purchased for $11.75 million in 2019. 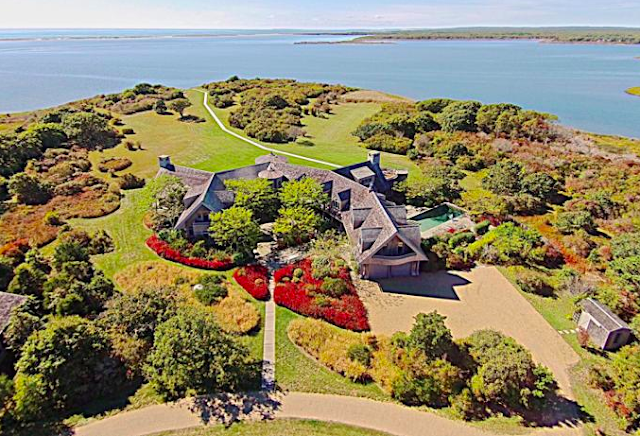 Reports surfaced this week that Obama is also in the process of building a home in Hawaii that he will use as a "retirement home". It made news because Obama's front man is reportedly using a planning loophole to circumvent some environmental regulations during the building process. That property cost $8.7 million and that is before the costs of tearing down the house on the property and the costs to be build a compound with three new houses on the tract of land for the use of Obama and visitors.

The building site is famous as being the exterior shot used to represent the mansion in the Magnum PI tv series.

This is the 3-acre site overlooking Waimanalo Bay. 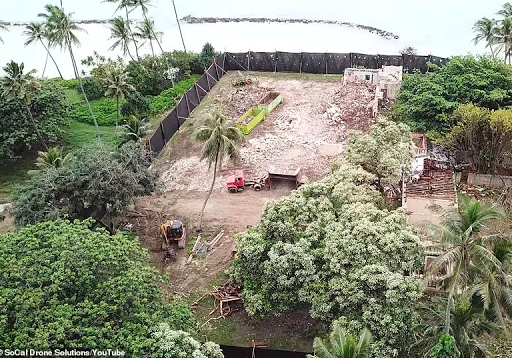 This is the view looking out over the bay. 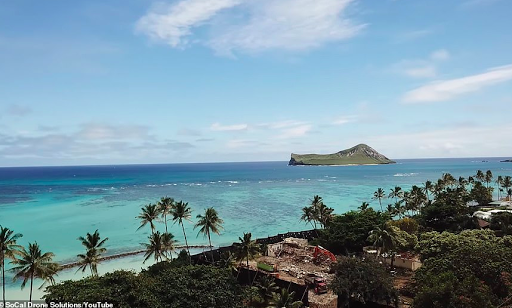 I am not begrudging Barack Obama for making a lot of money and buying a lot of houses.
However, how is it that Donald Trump is said to be enriching himself as President when he is giving away his entire salary as President and his net worth has decreased by over $1 billion in the last four year and Barack Obama is considered a dedicated and selfless public servant?
Trump is the only President in my lifetime that will undoubtedly have less wealth when he leaves office than when he entered. Contrast that with Obama, Clinton and others who enriched themselves by tens of millions of dollars when they left office. For that matter, compare Trump with Joe Biden after he left the Vice Presidency.
I wrote about what was revealed in the tax returns of Joe Biden earlier this year. This is a guy who became a United Senator at age 30 and spent the 44 years doing nothing other than taking a federal paycheck. His income in the first year he left public service? Over $11 million. Middle class Joe? Seriously? Who really enriched themselves due to holding public office?
Obama, Biden and Clinton's make much of the need to raise taxes and redistribute the wealth.
Obama has said that a lot of the success of those who are better off in our society is due to the American system of education, infrastructure and others who helped them along the way. Therefore, they should be more than willing to pay more in taxes.
He famously stated in a 2016 speech that "you didn't build that" income and wealth by yourself.
"If you’ve got a business, you didn’t build that. Somebody else made that happen,"
However, if you think about it, there is no one that argument applies to more than a former public official that goes into the private sector and capitalizes on their name, their contacts and their experience than people like Joe Biden, Barack Obama, Hillary Clinton, Paul Ryan or John Brennan.
In each case, their entire personal career or brand equity has been earned in a public sector job that the American taxpayers paid for. For these people it is really true that "somebody else made that happen." For most politicians, everything that they earn after leaving the public sector would not have occurred but for the taxpayers funding that prior experience.
The Democrats seem to be desperate to raise more in taxes.
My suggestion is that we start first with a surtax on any earnings of former elected or Senate-confirmed executive branch appointments wherein a percentage of post-public sector earned income would be subject to an income tax surcharge.
That surcharge would be equal to 1% for each year of federal service. For example, Biden had 44 years of federal service before he started writing books and giving speeches. Under this proposal he would be subject to a 44% surcharge on this income.
Doesn't it seem fair that the taxpayers should get some return on the investment they made in Joe Biden over the years that allowed him to be so much in demand by the private sector?
After all, "the somebody else that made it happen" were the American taxpayers.
I can't think of anything that would be fairer when it comes to taxes.
I suggested in these pages earlier that Michelle Obama would have been Joe Biden's dream pick for VP. Why didn't that happen?
First, there is the question of what a loss to Trump would do to the Obama legacy? Don't think that was not a consideration
However, I also could not see how Michelle would ever agree to be the ticket considering the scrutiny that would mean and the financial loss that would mean for the Obamas. That would mean no Netflix deal. No $400,000 speeches for Barack. No corporate board seats or high-paid consulting gigs.
Owning and maintaining four houses requires a lot of cash flow. What do you think the taxes, insurance, upkeep, utility and maintenance costs are per year on those properties? It has to be at least $1 million per year. That is not easy on a VP's salary---or even a President's pay.
For context, here is what Barack Obama said on the subject of wealth inequality a little over a year ago at a speech in South Africa.

This is the full quote from the speech.

Enough for you and me maybe. It is just not enough for a real estate baron like Barack Obama.
Posted by BeeLine at 7:42 PM