Several years ago Michael Lewis (of The Blind Side and Moneyball fame) wrote a book about Daniel Kahneman and Amos Tversky and explored the extraordinary work that these men did in creating the field of behavioral economics. 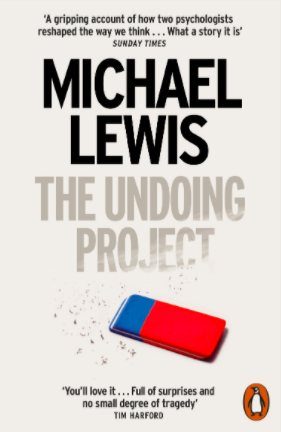 This is how the book is described on the inside book cover flap.

Forty years ago, Israeli psychologists Daniel Kahneman and Amos Tversky wrote a series of breathtakingly original studies undoing our assumptions about the decision-making process. Their papers showed the ways in which the human mind erred, systematically, when forced to make judgments in uncertain situations.

In effect, many times our minds lead us to decisions that result in our undoing.
I have written about behavioral economics and the work of Kahneman and Tversky often in these pages.
Here is a blog post I wrote after reading The Undoing Project.
I also wrote this when referencing Kahneman's book "Thinking Fast and Slow" which showed many examples of how are minds can undo us.

I am biased. You are biased. Everyone is biased.
It is the way our brains are built.
Daniel Kahneman, who won the Nobel Prize for his work in behavioral economics, wrote this in his book, "Thinking Fast and Slow".

"A remarkable aspect of your mental life is that you are rarely stumped.  The normal state of your mind is that you have intuitive feelings and opinions about almost everything that comes your way. You like or dislike people long before you know much about them; you trust or distrust strangers without knowing why; you feel that an enterprise is bound to succeed without analyzing it'"

In other words, you have an opinion or bias about almost anything before you are even confronted with facts. And even when you have those facts, you are likely to interpret them in such a way to reinforce the opinion you had at the outset.

I could not help but think of all of this as I look at the decisions that various city leaders, school officials and university administrators are taking with regard to Covid-19 and its aftermath.
Let's keep in mind that in each case we are talking about leaders and institutions that overwhelmingly liberal and are populated by scores and scores of Democrats.
These people are being asked to make decisions in very uncertain times.
Are these decisions leading to their undoing?
It certainly appears that this could be the case.
Let's take a look at what is happening in a number of cities.
Many large cities are under enormous economic pressure due to Covid. Businesses in these cities have been disproportionately impacted. Many restaurants, bars and retail establishments may close. Other businesses are rethinking the need to be located downtown. Mass transit is under severe financial strain.
We are already seeing values of commercial and residential real estates start to decline.
However, many of these cities are still arguing for continuing lockdowns and school closures.
Even worse, the politicians in many cities have stood back and let their cities be vandalized and looted while they stood by and watched. They are calling for the police in their cities to be defunded.
Consider this tweet from the NYPD 19th Precinct the other other day. 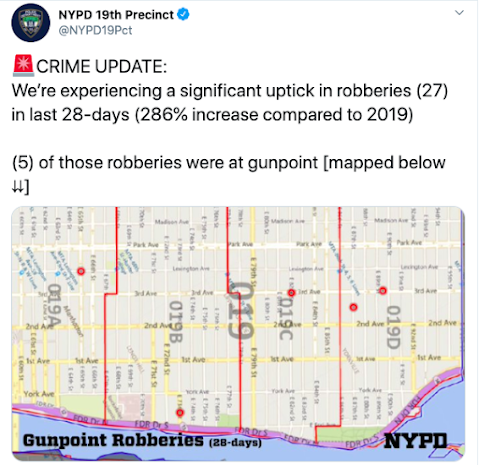 Or this from the Chicago Sun-Times on shootings and murders in Chicago. 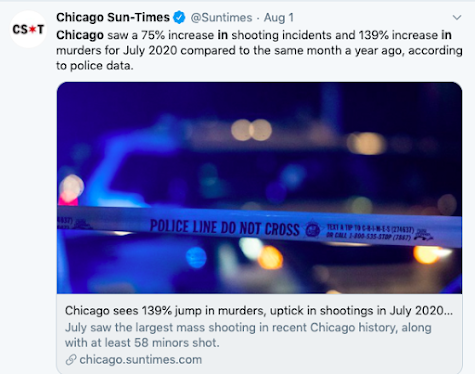 Or this report from an AP reporter in Portland. 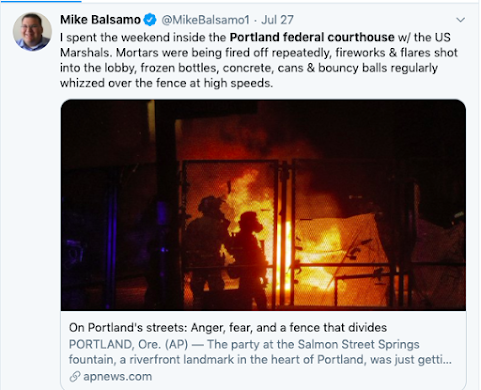 Who is going to be left in these cities to pay the taxes that are necessary for their continued existence?
Is this something the politicians in these cities are even considering?
Are they undoing themselves?
Look at what is going on with the public schools as well.
Despite overwhelming evidence that there is very low risk from Covid-19 to school age children, school administrators and the teachers' unions are resisting calls to open schools.
The CDC recently released data that indicates that only one out of every 1.5 million school children is at risk of dying of Covid-19. The risk of a child dying of the seasonal flu is 7 times greater.
The scientific evidence continues to also point to fact that school-age children are also not spreading the virus very widely. This is in sharp contrast to the seasonal flu in which children are considered prime vectors of the spread of the disease.
This is the headline from a recent article from Pediatrics, the journal of the American Academy of Pediatrics.

Almost 6 months into the pandemic, accumulating evidence and collective experience argue that children, particularly school-aged children, are far less important drivers of SARS-CoV-2 transmission than adults. Therefore, serious consideration should be paid toward strategies that allow schools to remain open, even during periods of COVID-19 spread. In doing so, we could minimize the potentially profound adverse social, developmental, and health costs that our children will continue to suffer until an effective treatment or vaccine can be developed and distributed or, failing that, until we reach herd immunity.

In a normal world you would think that educators would be most interested in educating children in the best way possible. Normality seems to no longer apply.
In fact, educators from around the country rallied yesterday in what was called a "National Day of Resistance"

They also want to ban charter schools, private school choice and are asking for a bunch of new federal funding for education paid for by "the rich".
A number of teachers' unions are also pushing back on online teaching as well saying that they are not trained on how to do it nor on the technology.
Of course, they all agree they should be paid their full salary whether they teach or not. They also agree that everyone should keep paying the taxes that fund the schools that are not open.
All of this is causing parents to reconsider the choices they may make for the education of their children in the future.
A survey in late May indicated that 41% of parents stated that they were now more likely to consider home schooling their child or some other alternative once the lockdowns were over.
What was really interesting in that data is that Democrats were more likely to say they were more interested in home schooling than Republicans. Blacks were also more interested (50.4%) than Whites (36.3%).
In July, the Education Department website that parents in North Carolina go to in order to register their children for homeschooling and to opt out of the public school system crashed from the volume of requests entered for this school year. Even before Covid-19, North Carolina has more students in the state being homeschooled than were enrolled in all of the private schools in the state.
You have to ask if these educators have really thought through what their resistance to teaching in the classroom is going to mean for public schools in the future?
Less students in the classroom will inevitably result in less need for teachers. That will also mean less support for property taxes and other funding for public schools.
Are they undoing themselves?
Finally, let's consider colleges and universities.
Most will have almost all classes online in the Fall even if the students are living on campus.
Many schools are limiting the number of students who can live on campus so that there are no shared rooms. For example, only freshman are going to be allowed to live on campus at Harvard. However, they will still share bathrooms. Go figure.
At Stanford, freshman and sophomores can come to school in the Fall but they must go home in the second semester for the juniors and seniors to come to Palo Alto.
Most are discouraging (or banning) any outside visitors to campus. Most are discouraging students from leaving campus for any reason during the semester.
Many are planning to end the Fall term by the Thanksgiving break. For those that don't, the plan is to have all final exams done remotely.
Of course, these colleges and universities still want to charge the same amount for tuition that they did when classes were in person.
I also can't help but wonder if most of the courses are going to be given online why have any students on campus? Could it be that it is tough to charge room and board for someone who never comes to campus? Colleges are clearly intent in recouping some money for their investment in residence halls and dining venues.
You have to wonder whether colleges will ever again be able to charge the amounts that they did in the past to future students?
As someone said recently, "It is hard to charge the tuition Harvard does when you are offering a product that is no different than the University of Phoenix."
Is all of this the final nail in the coffin of ever-increasing college costs?
Will students and parents continue to be willing to go into gigantic sums of debt for a college degree and experience?
Are colleges and universities undoing themselves?
It appears to me that all of these Democrat-dominated institutions are undoing themselves by letting their minds be controlled by pandemic panic porn rather than considering real facts and the reality of the future that awaits them due to the decisions they are making today.
The reality seems to be clearer every day. The virus is going to do what it is going to do.  It is next to impossible to limit the spread. Sweden may have had the best approach all along. Protect the vulnerable, carefully monitor hospital resources and have the rest of us continue to operate as close to normal as possible while undertaking common sense safety measures. 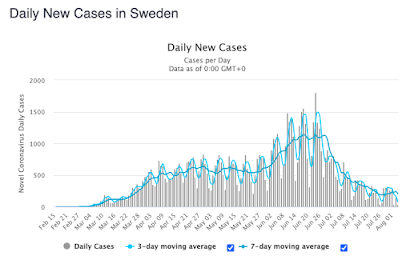 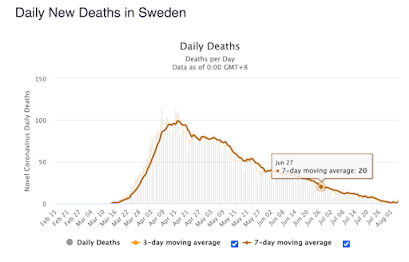 Consider the decisions that have been made and ask yourself if these are the product of logical minds? We let Walmart stay open but closed all the smaller stores. We now have bars open in most states but don't want to open schools. We said that liquor stores and pot shops were essential businesses. We banned elective surgeries and procedures but allowed abortion clinics to stay open.  In Nevada the casinos are open but the churches are closed. We have allowed mass protests in the streets but have not allowed small family funeral gatherings.
To be fair, there are many more whose minds have erred in these uncertain times than just those referenced above.
It makes you wonder how much of all of our undoing this year has come from Covid-19...and how much has been undone simply by how our minds work?
Our minds are much more dangerous to our lives, our livelihoods, and our future than the virus ever could be.
Don't let it be your undoing.
Posted by BeeLine at 11:11 PM