If you are more than five months old you may remember a time when we were told that we needed to lockdown the economy and close schools to "flatten the curve".

In my home state of Ohio, the state's Department of Public Health, Dr. Amy Acton, received glowing reviews for her role in advising Governor Mike DeWine in being at the forefront in the country in taking aggressive public health measures to "flatten the curve."

Here is an example of that favorable coverage in Time magazine from early April. 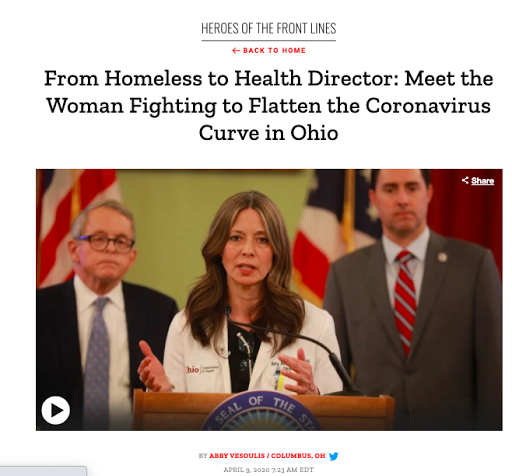 If you went back to mid-March for the reason given to take all the actions that were done it was always stated that it was done to "flatten the curve" to insure that our health resources were not overwhelmed.

This is Dr. Acton talking about the need to "flatten the curve" to conserve those health resources early in the pandemic. 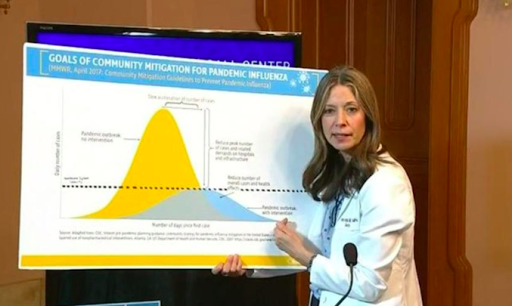 This is a close-up of that chart. Notice that the entire goal of the community mitigation strategy is to keep the numbers of overall cases below the level of the healthcare system capacity limits.

The number of cases in either curve on the chart below is the same.  We were told by Dr. Acton and others that all of the mitigation efforts were necessary to spread out the cases. The virus would be with us longer but it would result in fewer deaths. 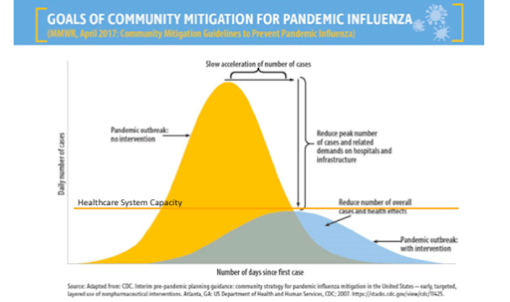 Here is a report from mid-March about Dr. Acton explaining the reasons why elective surgeries were going to be banned along with the other measures that had already been implemented at that time (restricting large gatherings, closing bars and restaurants etc). This was also several days after all schools were closed and a week before a stay at home order was put in place and the entire state was locked down.

Health Department director Amy Acton said the state's efforts to stop the spread of coronavirus – which recently included postponing Tuesday's election, restricting gatherings of more than 50 people, and closing all bars and dine-in restaurants – are necessary to prevent hospitals from being overwhelmed.

"There's no scenario now by which we won't have a surge," Acton said. "But if we did nothing, the estimates were that 2.2 million Americans would die."

Officials say that capacity will become a problem soon, with growing demand for beds, ventilators and materials for doctors. Hospitals are currently operating at 75% capacity, says Ohio Hospitals Association CEO Mike Abrams, which is normal for this time of year.

Yesterday Dr. Acton resigned from state government to return to a position with the Columbus Foundation which she had been with before becoming a part of the DeWine administration. She had previously stepped down from her job as head of the state's Health Department in mid-June but remained as Chief Health Adviser to Governor DeWine. She will now apparently be an interesting footnote in history.

Over time, Acton became a casualty of increasing criticism by more and more people frustrated by the lockdown measures. What was once defended as necessary to "flatten the curve" to conserve health care resources morphed into something different altogether.

For example, what was once sold as having schools being closed for several weeks for an extended Spring Break to "slow the spread" has turned into many Ohio school districts still not opening their doors to students this Fall.

Those students in grades K-12 who do return to the classroom will be required to wear face masks for the entire day based on a new order by Governor DeWine.

Seeing stories like this and the daily reports from the media about concerns over the "surging" cases in Ohio and across the country you might get the impression that our health resources are under stress.

Let's take a look at the most recent numbers in Ohio so that you can judge that for yourself.

The most recent data from Ohio's Covid-19 website shows that there have been 11,231 hospitalizations in Ohio associated with Covid-19.

You hear that number in a media news account and that sounds pretty terrible.

However, remember that is a cumulative number over the last five months.

We are also talking about a state of almost 12 million people.

That means that less than one of every 1,000 people in the state have been hospitalized with Covid-19 in the state.

If you look at the demographic data, there have only been 217 hospitalizations for those age 19 and under out of 3.7 million in that age range. That is about 6 per 100,000 in that age group.

In other words, the chances that a child would be hospitalized with the flu this year was many times more likely (4x-15x) than with Covid-19. Do you ever hear this in the current debate about opening schools?

Over half of the hospitalizations have been for those 60 years and older who comprise more than 2 million of Ohio's population. However, those hospitalized from this group is still less than .3%---that is just 3 in 1,000.

What is the current status on hospitalizations in Ohio? These charts were taken directly from Ohio's Covid-19 data site.

In these charts, gray is unused capacity. 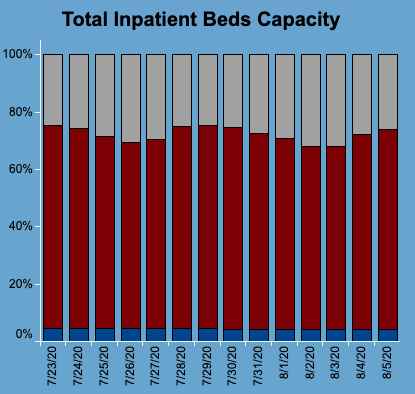 Only 4% of Ohio hospital beds are currently being used by Covid patients!

What about ICU capacity? 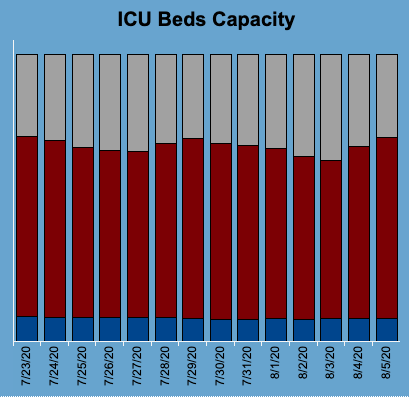 70% of all ICU beds in the state are currently being used.

Only 8% are being used by Covid patients.

What about ventilator capacity? 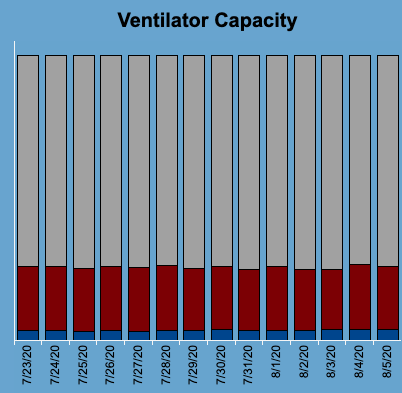 Only 26% of ventilator capacity is currently being used in the state of Ohio.

Only 4% of that capacity is being used by Covid patients.

Do you remember when it was said that we needed to build ventilator capacity like there was no tomorrow?

Have the number of confirmed cases gone up since the days when everything was locked down?

Yes. How would that not be expected going from a state that was totally locked down to opening up? Wasn't that also expected in "flattening the curve" and spreading out cases?

However, the number of confirmed cases is also undoubtedly a function of much greater testing as well. 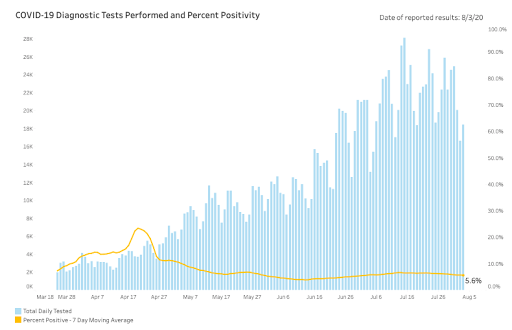 You can get a better perspective on all of this when you look at the overview on the Ohio Covid-19 website of cases, hospitalizations and deaths on a daily basis.

Confirmed cases are up substantially compared to the lockdown but appear to have peaked around the middle of July and are now trending down.

The biggest decrease has been in the number of deaths despite many more confirmed cases. Deaths are a fraction of what they were in April and May. This largely has to be due to doing a much better job of protecting the elderly and vulnerable populations, better treatment protocols and many more cases among younger people. 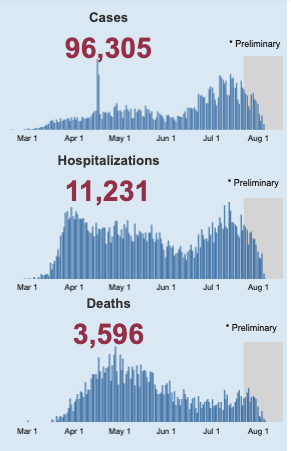 This data on Covid-19 deaths puts the national death totals in better context. 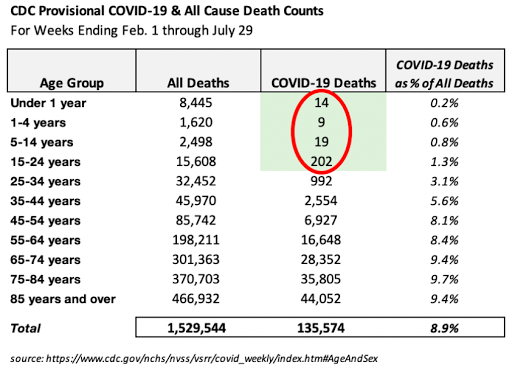 Since February 1, Covid deaths among those age 24 and younger have amounted to less than 1% of all deaths for this age group. In other words, 99.13% of the deaths have been caused by something else. How many accidents? How many drownings? How many cancer deaths?

Look at the total number of deaths of those under one year of age. How much concern is that there have been over 8,400 deaths of those in the first year of life in the last six months from something other than Covid? What is causing those deaths? This happens year in and year out but you hardly ever hear anything about it.

However, even for senior citizens, over 90% of deaths over the last six months have been for something other than Covid-19.

I appreciate the service of Dr. Amy Acton in serving her state during a most difficult period of time. She deserves a lot of respect and admiration for stepping into the public arena and giving her time and talents to the cause of public health.

However, she kept moving the goal posts with regard to what the public was being asked to do and what the goals were.

It cost her credibility and ultimately her position with the state.

When you interfere in the lives and livelihoods of people to the degree that Acton did you better be consistent in your message and you better be right. Based on the background above, you can be the judge at how successful she was in that regard.

Interestingly, Acton's former boss, Governor Mike Dewine, tested positive today for Covid-19 when he was screened before he was scheduled to meet President Trump. DeWine has shown no symptoms of the virus at this point but he is 73 years of age. He is going to undertake another test to see if he might have gotten a false positive. He has stated he is going to self-quarantine for 14 days

All the best to Governor DeWine for a speedy recovery. It is another reminder that the virus is going to do what it is going to do despite the Governor surely following all of the safety precautions that have been recommended.

The other reminder is that you need to look beyond the headlines and the hype.

Most of the time you need to read the footnotes to get the facts.

If you read BeeLine you don't have to do it. I did if for you here.

Pass the facts on to a friend that might appreciate what is in those footnotes that you rarely see anyone report.