Undoing Themselves Some More

Last week I wrote how colleges and universities, teachers' unions and big city politicians were undoing themselves with their policy decisions concerning Covid-19 and its aftermath.

More evidence confirming this "undoing" surfaced this past weekend when the Mid American Conference announced it was postponing (canceling?) all fall sports in that 14 member league.

There is a lot of speculation now whether this decision will prove contagious and result in the cancelation of the entire Division 1 FBS college football season. Some say that it will take only one of the five Power 5 conferences (Big 10? PAC 12?) to start a cascade of all schools abandoning their season.

I have a particular interest in the MAC decision as I am a graduate of Miami University which has more MAC football championships (16) than any other conference member.

Miami has a storied tradition in college football having fielded a team since 1888. It is known as the "Cradle of Coaches" for its long line of acclaimed coaches who either played or coached at Miami and then went on to sustained coaching success.

In the NFL today, both John Harbaugh (Ravens) and Sean McVay (Rams) are Miami grads. Sean Payton (Saints) coached at Miami in the 1990's.

Miami is also the alma mater of Ben Roethlisberger who led the school to a #10 ranking in the final 2003 NCAA Division 1 football polls. 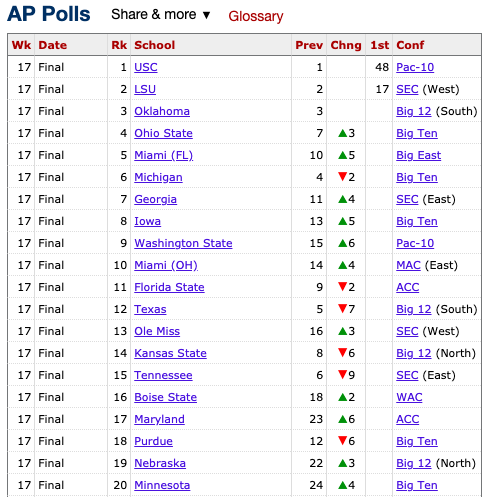 What I find interesting is that the football season is being canceled even though Miami played almost all of the 1918 season (6 of 8 games) in the middle of the Spanish flu pandemic that was most lethal to college age students.

It played games during World War I.

It played games during World War II. It played during the Korean War and Vietnam War eras as well.

We are hearing that the decision is based on "health and safety" reasons but some are saying that it is driven by financial reasons. When the larger conferences announced earlier this summer that they would limit their schedules primarily to conference games this meant that many MAC schools could not rely on the $1+ million paydays they got by playing games at Ohio State, Michigan, Alabama and other powerhouses.

This is the chart for the seasonal flu for hospitalizations for all ages for 2019-2020. The CDC does not break out the age group 18-24 in this data. However, the hospital rate for ages 5-17 is 17.1 per 100,000 and for 18-49 it is 33.3. You can see these are not materially different than the Covid-19 hospital rates if you extrapolate to a number somewhere between those two age groups.
For context, these are the annual hospitalization rates that a 2008 NIH study found for alcohol and drug abuse for those in the 18-24 age groups. This is compared to the Covid-19 hospitalization rate in Ohio of 25.4 referenced above.
Alcohol abuse         98 per 100,000
Drug abuse             378 per 100,000
What is more dangerous to the health of college students?
These numbers suggest that more of these athletes are going to end up in the hospital for one of these rather than Covid-19. You can argue that risk will probably be enhanced now in that these students will have much more time on their hands in light of the decision to cancel their season.

Let's take a closer look at the financial implications of this decision.

I know that college administrators have not been known to have a particular sensitivity to financial realities in the past. They have shown little regard for financial restraint and have simply been of the mind to push higher and higher costs on to parents and students driven by the attitude that they would pay it or there would be federal student loans to cover the costs.

Of course, that is why we now have  $1.7 trillion in student debt. For context, that is equal to the entire GDP of Russia last year.

Will canceling the college football season result in any cost savings to schools like Miami?

No. It will just make their financial conditions worse.

Most of the costs involved in college athletics are fixed costs involving the salaries of coaches and staff and the costs of the athletic scholarships for the student athletes.

At Miami, the football budget had costs of $9.3 million last year. Only $1.2 million of that related to variable game day costs ( Lodging, meals, transportation, uniforms, and equipment for coaches, team members, support staff (including, but not limited to team managers and trainers) and Officials for the games.

Not playing the season will mean that schools can avoid the costs of Covid-19 tests that might have been required to play.

However, a minimum of $8 million in fixed costs remain.

On the other side of the ledger there will be almost nothing coming in regarding revenues. No home ticket sales. No tv revenue. No payments for "buy' games at bigger schools. Much lower alumni contributions. No activity fees collected from students.

It is a financial disaster of epic proportions to schools like Miami and other MAC schools.

Let's start with a comparison of the athletic budgets of Miami and Ohio State (2017-18 year).

However, that is just the start of it.

A school like Miami has to heavily subsidize its athletic program with institutional support.

In recent years, a student activity fee of about $1,000 per student funded about half of the athletic budget of MAC schools like Miami. Another 20% of the budget was in direct subsidies from the overall university budget.

How does a school justify charging a student activity fee 1) if students are not even on campus to begin the school year and 2) there are no athletic events to attend?

In total, about 70% of the athletic budget is subsidized in some form. 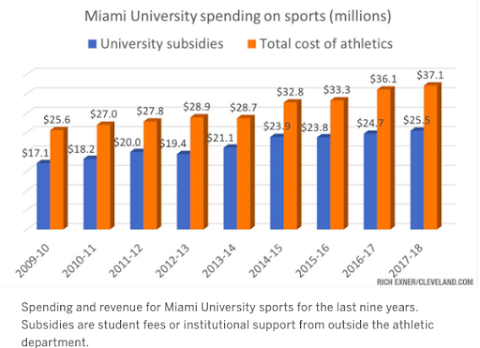 Ticket sales only cover about 3% of athletic budget costs at Miami.

Make no mistake, as the numbers above indicate, mid-major athletic programs at schools like Miami had major structural financial problems before Covid-19 appeared on the scene.

Some argue that college administrators are using the Covid-19 pandemic to do what many academics have wanted to do for a long time---scale back the influence of college athletics.

I can understand why the MAC schools would have made the decision they did if the Power 5 schools acted first.

However, it makes no sense doing this on their own. It is akin to committing suicide if the P5 proceed with their season. The MAC will have transformed themselves to having little relevance in college athletics to having absolutely no relevance.

Perhaps the P5 schools are even crazier than the mid-majors? Look at that Ohio State athletic budget above for which football pays most of the bills for all the other sports (men and women).

How do you make sense of it?

It is not supported by the science involved regarding the health and safety of the athletes. It is certainly not supported by any financial cost savings. In reality, the financial issues will become much more severe in light of the high fixed costs with the budgets of football and other athletic programs.

Will we see furloughs or substantial pay cuts to coaching staff? What about the athletic scholarships? That would clearly be the result if we were dealing in the real world and not with academia.

If all this is not supported by the health facts or the financial facts, why is it being done?

Why do so many want to undo themselves?

I don't personally care if I see Miami play this year. I enjoy following the team and the current year looked promising with 16 starters returning from the conference championship team.

However, I care more about the legacy and long-term future of Miami, higher education and our country's economic future.

You can't make good decisions taking account of first-order effects only. Considering only those effects that are seen today. There are also second, third and fourth order effects to any decision. They are unseen today but should be foreseen and taken into account in any sound decision making process.

The unseen that should be foreseen is what is the undoing of many.

It is unfolding before our eyes with decisions like this.