We continue to hear it every day. Newscasts begin with the new daily case counts. We are incessantly told about the death counts. We have started to hear more about the "unknown long-term effects" involving Covid-19. We hear about cases involving college students who have returned to campus and we hear that it is too dangerous to open our schools.

Will we see this quote from Charles Mackay's book, "Extraordinary Popular Delusions and the Madness of Crowds" come full circle?

"Men, it has been well said, think in herds; it will be seen that they go mad in herds, while they only recover their senses slowly, and one by one.” 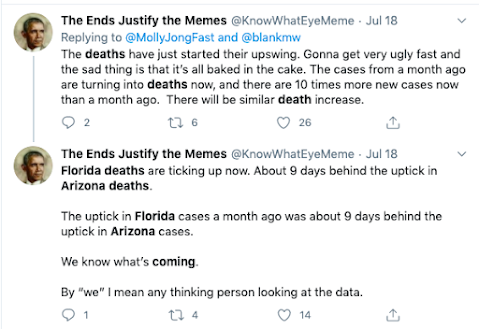 We were told that we should expect a meteoric rise in deaths in states like Florida and Arizona.

Six weeks later what has occurred?

New cases in Arizona are now below what they were on June 1.

Deaths did not increase. They started falling right after July 18 and today are only about 1/3 the numbers we were seeing at that time.

We were also told that it would be a disaster if schools reopened for in-class instruction.

You might have seen this story about a Covid-19 outbreak in the Cherokee County schools in Georgia shortly after they reopened in early August.

You likely did not see the follow-up report.

They have 5,000 staff members in the school district.

This data is taken directly from the Cherokee County School District website and is updated every Friday.

Even more interesting is that 43 (34 students, 9 staff) out of the 102 total active cases were cleared to return to school as of Monday, August 31.

There have been a lot of news stories about the 1,200 University of Alabama students who have tested positive for Covid-19 since classes began last month.
However, I have not seen any news reports that have also reported this fact that was in the most recent press release from the Alabama university system.

At this point, no COVID-positive students at UA, UAB or UAH are hospitalized and there is a high overall vacancy rate (70+%) in UA System isolation spaces.

Panic porn perpetrators have been further put on the defensive with the CDC report issued late last week that showed that only 6% of Covid-19 deaths were attributed solely to the virus.
This has been falsely interpreted by some to downplay the lethality of Covid-19. In fact, if you think about it, if 6% of deaths have occurred in otherwise healthy individuals with no other contributing factors it shows the virus should not be taken lightly.
However, when you see the entire list of the contributing factors, and the distribution of ages, it is clear that this virus primarily attacks the oldest and most vulnerable among us. On average, there were 2.6 additional contributing factors beyond Covid on the death certificates.

It is also seems inescapable to me in looking at the data that the Covid-19 death numbers are overstated merely because there is a test to identify the virus in the body.

Let's be real here. If someone died in an auto accident, or had a heart attack, and also had a mild case of the flu, the death certificate would not list influenza as a cause of death.

You can see the effect of what has occurred in this chart that @EthicalSkeptic prepared that shows all natural cause deaths (excluding Covid-19) are now far below the averages of the last several years. This indicates that a number of deaths we saw from Covid-19 in April and May were likely fatalities we would have seen in June and July in a normal year. This trend is still playing out in the numbers. 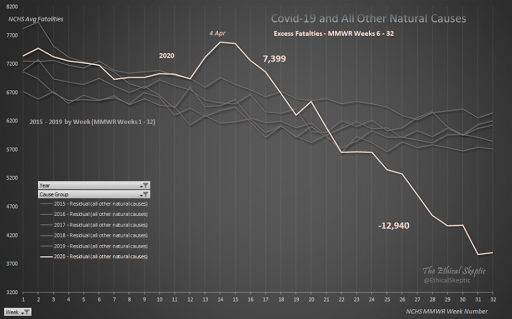 How big is the "testing" effect in all of this?

As I have written before, there are usually less than 1 million tests for the seasonal flu conducted each year in the United States even though it is estimated that there are as many as 36 million flu infections annually.

We are now conducting almost as many tests for Covid-19 in a single day as we do for the seasonal flu in an entire year. 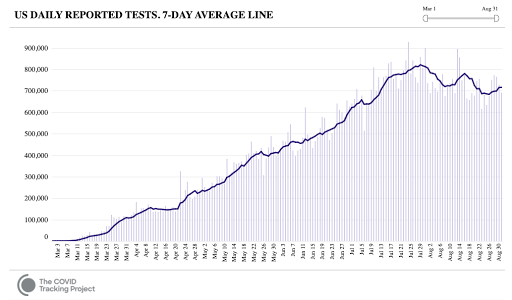 Based on an analysis that the Times did of PCR tests in Massachusetts and New York, up to 90%  of people testing positive carried barely any virus and likely were not contagious.
Nevertheless, these people were recorded as confirmed cases, were likely quarantined for at least 14 days and all of their close contacts were told to do the same.
How is this occurring?

The PCR test amplifies genetic matter from the virus in cycles; the fewer cycles required, the greater the amount of virus, or viral load, in the sample. The greater the viral load, the more likely the patient is to be contagious.
This number of amplification cycles needed to find the virus, called the cycle threshold, is never included in the results sent to doctors and coronavirus patients, although it could tell them how infectious the patients are.

Most PCR tests are using 40 cycles of amplification in their protocols.

Tests with thresholds so high may detect not just live virus but also genetic fragments, leftovers from infection that pose no particular risk — akin to finding a hair in a room long after a person has left, Dr. Mina said.

The experts that the Times contacted said that nothing more than 30 or 35 cycles should be used with the PCR tests.

Any test with a cycle threshold above 35 is too sensitive, agreed Juliet Morrison, a virologist at the University of California, Riverside. “I’m shocked that people would think that 40 could represent a positive,” she said.

A more reasonable cutoff would be 30 to 35, she added. Dr. Mina said he would set the figure at 30, or even less. Those changes would mean the amount of genetic material in a patient’s sample would have to be 100-fold to 1,000-fold that of the current standard for the test to return a positive result — at least, one worth acting on.

Yes, you read that correctly.

The current PCR test standards are amplifying positive genetic material by 100x-1,000x over what it should be.

When The New York Times is asking questions about the testing protocols you know something is amiss.

I think we are near an inflection point where one by one we will see more people slowly recover their senses and separate from the herd.

Protests have been escalating in Europe against Covid-19 restrictions including the wearing of face masks. Large protests have been held in the UK, Germany, Belgium, France and Spain in the last couple of weeks.