A few random observations about Covid-19 and its effects that make you go hmmmm.
USA vs. Europe New Daily Cases
One of the constants about Covid-19 from the beginning is that when experts have told us something there is a good chance it will soon be proven wrong.
For example, it was not long ago that we were told that Europe had shown us how to manage and contain the virus.
This is the headline from The Denver Post exactly one month ago. 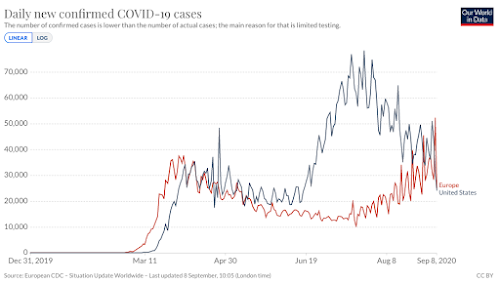 Spain and France are now seeing more new cases than they did in March and April. The good news is that deaths, as we have seen in the United States, are not following the case trend. 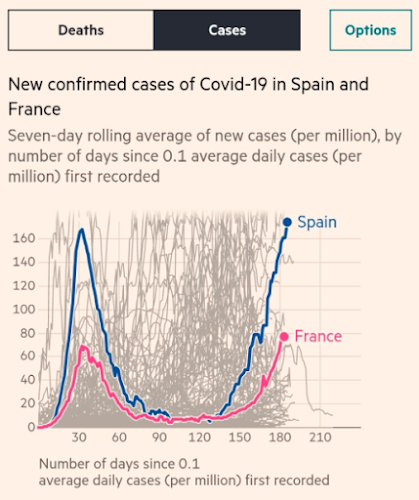 Have you seen this reported anywhere in the mainstream media?
Unemployment
One thing that has surprised me is how quickly jobs gains have returned in the wake of the economic lockdowns. There is a long way to go but we were clearly very fortunate that the economy was so strong when the pandemic hit.
In fact, it is almost hard to believe that the unemployment rate in August, 2020 at 8.4% is almost the same as it was in August, 2012 (8.1%). 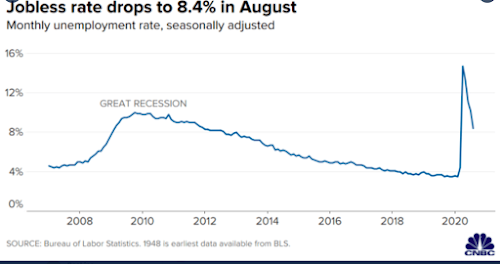 If you follow the mainstream media you would also not realize that President Donald Trump now has a higher approval rating (51%) than President Obama did at the same point in his Presidency according to the Rasmussen Tracking Poll.
What Is Going To Happen In The Housing Market?
Despite the fairly rapid employment gains, it is clear that many people are living on the edge right now. The Covid-19 economic lockdowns have disproportionately affected those in the bottom half of the income scale. It continues to amaze me why Democrats, who claim they are most concerned about income equality, are so adamant about continuing the economic lockdowns.
In 29 states, 40% or more of renter households are at risk of eviction.
A Pew survey out this week shows that 52% of young people between the ages of 18-29 are now living with their parents.
This is the highest level in history. 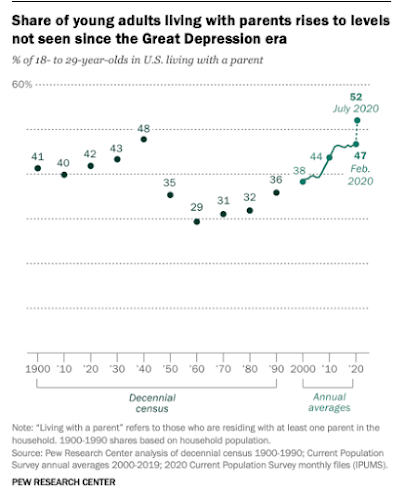 The residential housing market is also showing signs of stress. A surprising statistic is that there are already more home mortgages 60-89 days past due than at any point since 1999. This includes the Great Recession period of 2008-2010 when so many mortgages went into default. 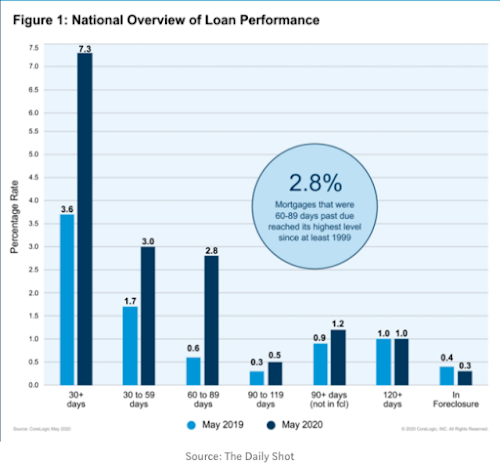 It is not just renters and middle income homeowners who are under stress. High income homeowners are also under strain in that government assistance is not available at the same level as it is for others. This is evidenced by the fact that in June we already were seeing 11.8% of all jumbo loans (generally mortgages of over $500,000) in forbearance. This was more than double what it was just two months before.
If we are to recover from the pandemic we cannot allow the housing market to go into free fall. We saw the compounding effects of that in the 2008-2010 financial crisis.
Money in the Bank
A glimmer of hope for the economy's recovery is the cash savings that has been accumulating in bank accounts since the beginning of the pandemic. This is a result of both government payments under the CARES Act as well as reduced consumer spending.
Deposits in checking accounts increased by $1.5 trillion between April and the end of July.
Aggregate personal savings soared as there were few places for people to spend money.
Balances on credit cards also dropped.
Look at how all of this translated to excess savings calculated on an annualized basis for the months of April-June.
What does this tell us?
First, it reveals how interconnected our economy is. The lower half of income earners depend on the spending of the upper half of income earners for the money they live on. If higher earners are not eating out, buying clothes, going to concerts and games. remodeling their house, traveling and spending their money a lot of people don't have jobs.
The government can try to fill that hole but there are practical limits to doing that. Extra unemployment or a stimulus check can only go so far.
The reality is that if those higher earners catch a cold, the rest of the economy is going to have pneumonia.
Second, there seems to be a good deal of dry powder in the form of savings and cash to fuel a recovery if we can get past the fear of the pandemic and return to some form of normalcy.
That excess savings could translate to an additional $100 billion or more of consumer spending per month over the next year to spur growth if confidence can be restored.
Percent of Those Home Schooling Has Doubled in One Year
This stat makes you wonder what the public school teachers' unions and public school administrators are thinking? They truly are undoing themselves by opposing the reopening of schools in many parts of the country.
10% of K-12 students are now being home schooled. Their parents have pulled them out of school and have taken over the job themselves.
Will they go back after this school year is over? The answer to that question might mean the loss of billions of dollars in school funding. Once parents get used to the idea it might be difficult to get those students back in a public school classroom.
What I found particularly interesting is that more students are now being home schooled than attend both private and parochial schools COMBINED!
Is a Vaccine the Answer?
We still keep hearing that a vaccine is the only way that public confidence is ever going to be restored.
Many politicians have stated that they will not fully open their jurisdictions until a vaccine is available. For example, New York City Mayor DeBlasio has already stated that indoor dining in the city will not be allowed before June 1, 2021 and that assumes a vaccine will available by then.
If that is the case, how was public confidence restored after the Spanish Flu Pandemic? No vaccine was ever produced against that virus. What about other pandemics in history? How did anything ever get back to normal without vaccines?
There are hundreds of companies seeking to develop a vaccine or other therapeutics. This by itself shows the power of capitalism and the free enterprise system.

The question remains as to whether any vaccine will be effective and will it be safe so it helps in the near term?
Consider the timetable that it took to develop other major vaccines in use today. 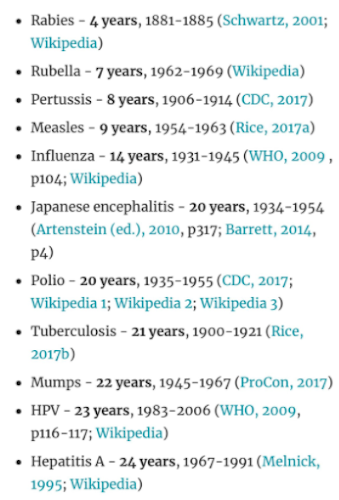 This would suggest it is a tall order to believe that a safe and effective vaccine can be developed for Covid-19 in less than one year. This is even taking account of the fact that some of the work has been leveraged off of previous efforts directed towards a SARS vaccine that was never completed because the virus died out.
I found it interesting that in a recent Barron's article on Covid-19 vaccine development it was stated that 750 investors and 350 biotech and pharmaceutical professionals were recently surveyed and roughly 70% said they would wait at least six months after any emergency use authorization by the FDA approving a Covid-19 vaccine before they would take the vaccine themselves. Many said they would wait a year.
A recent CBS poll found that just 21% of voters say they would get the vaccine as soon as it is possible. That had fallen from 32% in late July.
This suggests to me that the fact that a vaccine is available still does not mean that people are going to be rushing to take it.
On the other hand, Joe Biden said yesterday that he would take a Covid-19 vaccine tomorrow if it was available and approved by the FDA and CDC.

I am a bit confused as to how President Trump is undermining confidence in the vaccine? Trump has been the person who has pushed the strongest for it and supported its development with billions of federal dollars.
Make no mistake, Biden only said this because his VP pick, Kamala Harris, stated several days ago that she would not trust any vaccine developed under the Trump administration.
The statement by Harris clearly must not have polled well. Liberals are not known to be anti-vaxxers. 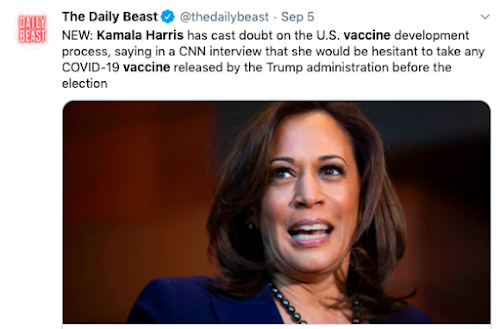 I guess Harris also neglected to consider the thousands and thousands of government doctors and scientists (most of which are Democrats) at the FDA and CDC who are big Democrat and Biden supporters politically. They will ultimately be the ones with the responsibility to determine if it is "safe and effective". It will not be Donald Trump.
I understand why politicians like the idea of talking about a vaccine. It seems like the easiest way to regain public confidence and return to normalcy. It is the simplest message to provide hope to the public.
However, my personal view is that placing faith in a vaccine as the ultimate answer to Covid-19 is a mistake. I have written before that it seems to me that President Trump has been spending too much time listening to Dr. Fauci, Bill Gates and big pharma interests who seem to think that vaccines are the answer to any health issue. In the end, he may regret placing too much emphasis on this "solution".
As I stated in an earlier post , all of this talk about vaccines might actually be holding us back from returning to normal sooner rather than later.

It was recently suggested that people would be more likely to return to normal activities if they thought that a vaccine was not a realistic possibility in the near term.
Simply stated, people are willing to sacrifice now with the hope that it will end soon with a vaccine. However, if you told people not to count on a vaccine there would be a totally different mindset. People would have to get on with their lives and make the best of it. There would be no other choice.
Throughout history this is what people had to do in dealing with pandemics. It was not possible to close most businesses, shut down schools for months, have colleges only do remote learning, work from home and buy what you need to live online. You did the best you could but you could not stop daily life. Everyone knew that the alternative would be far worse.

Just a few more things that make you go hmmmmmm.
Posted by BeeLine at 8:07 PM