A pivotal week lies ahead in the Presidential race.

The first debate is scheduled for Tuesday night.

President Trump and Joe Biden will go head-to-head for a large television audience with Chris Wallace moderating the debate in Cleveland.

Incumbent Presidents have typically performed poorly in the first debates during most Presidential races.

You may recall Barack Obama being described as having an "off night" when he debated Mitt Romney in 2012 or the questions that were raised about the mental faculties of Ronald Reagan in his first debate with Walter Mondale in 1984. Romney picked up 4.4 points in the polls after the first debate in 2012. Reagan saw his lead fall by 3.6 points in 1984. However, in both cases the incumbents rallied and won re-election.

Various theories have been advanced for why this has occurred. Some argue it is due to the fact that the challenger has been "challenged" more in the year leading up to the debates. They have have had more practice debating and have been challenged more by the media. It is said that the incumbent has gotten soft in not being in the fray to the same extent the challenger has.

There is little question that there will be a lot of eyes on the debate this week. Forbes predicts that the debate audience might approach 100 million viewers. That viewership has only been reached 11 other times in television history of which 10 were Super Bowl games. The other program was the M*A*S*H finale in 1983.

With the pandemic curtailing campaign rallies, a polarized political climate, the ratings spike of newscasts, the lack of original programming content on competitive cable networks, an unpredictable president who constantly courts media attention (including expected complaints about the moderator and format) and recent debates setting TV audience records, the 2020 debates could average 100 million viewers, joining ten Super Bowls (including this year’s) and the M*A*S*H finale in 1983 to reach that audience threshold.

Forbes fails to mention one other factor in its analysis.

Viewer interest in determining whether Joe Biden is up to the task of being President of the United States is going to be strong. There is still a substantial question hanging over the candidacy of Joe Biden. I wrote about it in my last blog post when I asked , "How Worried Should We Be About Joe Biden?"

Will Biden be able to go toe-to-toe with Trump on the debate stage? Biden has long been known for gaffes, will he slip up on the biggest stage ever? Can Biden give voters the confidence that he has the drive and durability to be President of the United States in these challenging times?

The schedule Biden has been following does not suggest that he has it.

Consider this tweet from The Hill reporter Joe Concha. 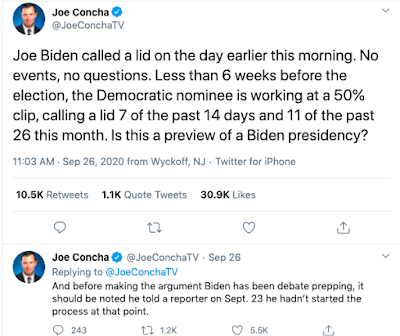 This is all at the same time that Trump is flying around the country speaking at large rallies while also nominating a new Supreme Court justice and brokering Middle East peace agreements.

Biden's recent interview with MSNBC also should not inspire much confidence that Joe has it together ahead of the debate.

Watch Biden as he is thoroughly confused and needs MSNBC anchor Stephanie Ruhle to bail him out. Pay particular attention to the look on Ruhle's face as she listens to Biden. She closes her eyes as if to say to herself, "this is our candidate and this is a nightmare."

Click here if your browser does not play the video.

This article from RedState details some other strange things that came out of Biden's mouth during that interview.

Here is another example from last week where Biden was addressing the United States Conference of Mayors virtually, in which he said he said he had gotten to the Senate "180 years ago."

Remember what I wrote recently about problems with numeracy being a warning sign of dementia?

Click here for the video if the video below does not play in your browser.

Joe Biden has a tremendous opportunity to lay these concerns to rest with a solid debate performance just as Ronald Reagan did in the second debate in 1984.

However, a performance like those above in front of 100 million people would be very damaging to the cause of the Democrats.

There are many voters who don't pay much attention to politics. However, they know what they see and hear.

That is why the debates are a pivotal point in the race. Donald Trump and Joe Biden both have a lot riding on their performance Tuesday night with that gigantic audience that will be further amplified by social media.

Love him or hate him, Donald Trump is a known quantity for most voters. Presidential debates present much more opportunity for the challengers to capture swing voters. On the other hand, there may be voters who don't like Trump personally but are they willing to risk their lives, livelihoods and liberty on someone who presents themselves like Biden did in the two clips above? That is asking voters to make a very big BET.

Making any change involves risk. That is a fundamental trait in most human beings. People tend to prefer the known versus the unknown. That is why incumbents have an advantage in most elections. Familiarity drives favorability. That is why so much is spent on advertising and most people think that their hometown is the best place to live.

I can guarantee there will not be a better show on tv than what we will see on Tuesday night.

Count me in as one of the 100 million that will be watching.