How Worried Should We Be About Joe Biden?

It is often said that the weight of the responsibility of being President of the United States ages the officeholder.
Here is a comparison of what Barack Obama looked like when he took office in 2009 and when he left office in 2017. 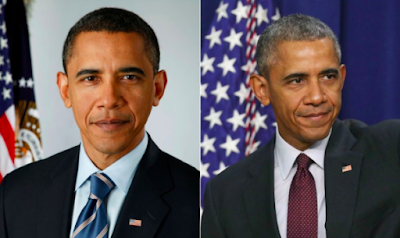 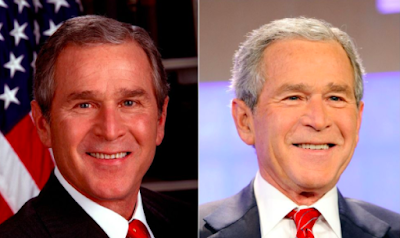 If Joe Biden is elected, he will be the oldest President to ever sit in the Oval Office starting on his first day in office. He will be older when he begins his term than Ronald Reagan (the oldest yet to serve) was when he left office after two terms.
The longer the current campaign goes on it seems there are more and more questions about the mental abilities and faculties of Joe Biden.
The limited campaign events that Biden does are very controlled and orchestrated. He almost never takes any questions.
For example, this is Biden's calendar for September. On 8 (red marks) of the 22 days in the month Biden's campaign has called a "lid" on the day to the press before noon indicating he would not make any public appearances or be taking any media questions that day.
When he has campaigned it has been very limited and very isolated.
For example, yesterday Biden flew to Wisconsin for a one hour event, took no questions, and immediately flew back to Delaware.
To make matters worse, Biden had his face mask on upside down, botched the Pledge of Allegiance and referred to the fact that 200 Americans had died of Covid-19 when he gave his speech. The day before he claimed that 200 million had died of the virus.
Why was he even wearing a mask when he was giving a speech with almost no one in the room? 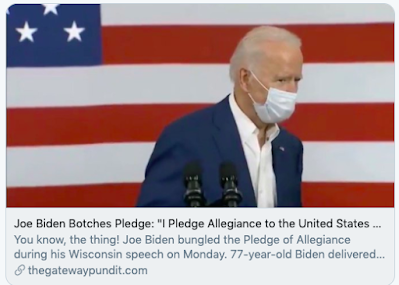 He also did a tv interview with Telemundo yesterday in which it appears that he had a teleprompter to the right of the interviewer to assist him in answering the questions. 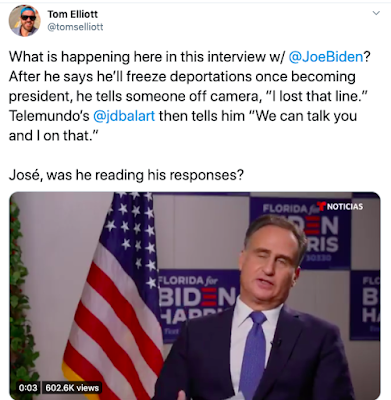 Ask yourself first, why would any news organization allow this?
Check out the video clip for yourself.
Notice how Biden is clearly looking to the right of the interviewer as he answers the question.
He makes his first point and then says "I lost that line" and turns back to the interviewer.
The interviewer looks as if he is covering for Joe when he says "We can talk you and I on that." Isn't the interview supposed to be for the viewers' sake?
Notice how Biden also says he would suspend deportations for the "first 100 days of my campaign" when he clearly means his administration.
This is just another example where Biden appears confused and is unable to handle himself without having a teleprompter or some type of notes to get through an interview.
What is most troubling to me in observing Biden is his inability to deal with anything to do with numeracy.
This is something we have seen time and again with Biden.
As I mentioned above, over the weekend he suggested that 200 million would die of Covid by the end of his speech. There are 328 million people in the United States. Two-thirds have died of Covid?
The next day he suggested it was 200.
Last week in Michigan he said that over 6,114 members of the military had died of Covid. The actual number is 7.
In February in a Democrat debate Biden said that 150 million Americans had died from guns. In June he claimed 120 million had died from Covid-19. 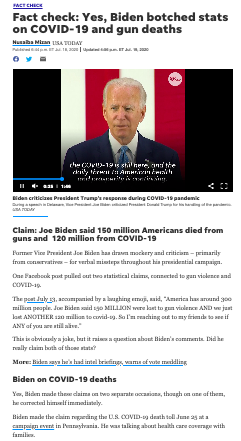 Let's be clear that everyone can misspeak and make verbal mistakes.
However, what is concerning about Joe Biden is the consistent pattern we are seeing particularly involving numeracy.
Most people who make these kinds of gigantic numeracy mistakes quickly realize the error and correct themselves.
This generally is not what we are seeing with Biden.
For example, he states 200 million Americans have died on one day and 200 the next day without seeming to realize the mistake he has made.
Experts in gerontology tell us that lack of numeracy is a gigantic warning sign for dementia.
It is usually one of the first warning signs.  That’s why the elderly are particularly vulnerable to financial scams. That is also why financial advisors have problems with elderly clients and want family members involved who have a Power of Attorney.
Early dementia elderly also very often lose the ability to fact-check themselves.

The paper above which was published in 2012 in the Neuropsychology Journal of the American Psychological Association points out that patients with degenerative brain lesions often make synctactic errors when reading or writing numbers.

In reading and writing numbers, three types of errors were identified using the Deloche and Seron classification (1982): (a) syntactic errors, which consist of the wrong assembly of the elements in the number string, for example, number “905” read as “nine thousand and five” or the spoken number “thirty thousand and 27” written as “327”

Could this explain how Biden could read 200,000 on a teleprompter and say 200 million one day and 200 the next? That would be a classic syntactic error.

I don't know but it seems to me to be a question worth asking.

Many people are also not aware of the fact that Biden twice had brain aneurysms repaired surgically in 1988. The first one was fairly large, a centimeter in size, and was leaking.  His doctor, Dr. Neal Kassell, has stated publicly that Biden is in excellent shape.
American Thinker magazine did an article on Joe Biden's mental lapses in August and cited some of Biden's medical history as well as providing perspectives from several doctors about Biden.
One was Dr. Marc Siegel who has been a medical consultant to both ABC and Fox News who pointed out that people who have had aneurysm repairs have a significant risk of cognitive impairment long-term.

"VP Biden in 1988 had two aneurysms repaired surgically before the modern, most modern techniques came in. Studies have shown that there's up to 50 percent cognitive impairment long-term following those aneurysm repairs," he said.
"Also a matter of public record, former VP Biden has atrial fibrillation, which is an irregular heartbeat. He's on blood thinners for that. A major study called the Swiss Atrial Fibrillation Study came out about a year ago. Over 1,200 people studied. They found three percent per year, even if people were on blood thinners, ended up having silent strokes. And guess how silent strokes present — they present usually with cognitive impairment with faltering, with inability to think clearly." ...
Atrial fibrillation also coincides with dementia, according to Hugh Calkins, MD, FHRS, FACC, FAHA, FESC, the Catherine Ellen Poindexter Professor of Cardiology and director of the electrophysiology laboratory and arrhythmia service at Johns Hopkins University.
"There are many studies showing an increased rate of all types of dementia in patients with [AF]," he said last year to Neurology Advisor.

As someone who has seen loved ones deal with cognitive issues later in life I am personally very concerned about Joe Biden based on what I have seen. If he is dealing with mental decline I don't understand why his family has allowed this to get this far.

As an American, it is deeply troubling if we have a candidate for President who may be in a condition of cognitive decline. This is especially true given the enormous challenges our nation faces right now. If there was ever a time when this country needed strong and determined leadership it is in 2020.

In this election every American is literally putting their life, livelihood, liberty and the legacy of the country on the line with their vote.

That is an awfully big bet to make on a 78 year old man who seems to have trouble  knowing the difference between 200 and 200 million in a country of 328 million people.

Are we seeing strong and determined leadership, if in the middle of a campaign six weeks before the election, the candidate is still spending most of his time in his basement and he rarely takes an unscripted question from the media?

The first Presidential debate is scheduled for a week from today.

Joe Biden has proven to be an able debater in the past. After all, this is the third time he has run for President so he has a lot of experience on the debate stage. He also participated twice in Vice Presidential debates. Biden has been in politics for almost 50 years. He has much more experience on a political stage than Donald Trump.

However, it will be Joe Biden who people are going to look at most closely in that debate.

How worried should we be about Joe Biden?

That debate might give us an idea. Biden can lay to rest a lot of the questions I have posed above with his performance on that stage and the two scheduled debates that follow.

Will he be able to do it? Will more questions surface?

My advice is to pay particular attention to anything dealing with numeracy.