I find great irony in the fact that there is probably no city in the United States of America that is more removed from the nation at large than those who live in Washington, D.C.

It is almost as if the residents of that city want nothing to do with, and have no respect whatsoever, for the country for which they are the capital city.

Consider the election results in the 2016 Presidential election.

Donald Trump was the choice of the American people in that national election.

Only 4% of the voters in Washington, D.C. voted for President Trump. Compare those vote results to more authoritarian or totalitarian countries.

Putin only got 77% of the vote in the last Russian election.

Maduro only got 68% of the vote in the last Venezuelan election.

It probably should come as no surprise that the District of Columba recently issued a report recommending the removal, relocation, or contextualization of the Washington Monument, Jefferson Memorial and a number of federal monuments and buildings in Washington, D.C.

The report also recommended the names on various schools, parks, playgrounds and streets in D.C. be changed if the names of the individuals involved had “key disqualifying histories, including participation in slavery, systemic racism, mistreatment of, or actions that suppressed equality for, persons of color, women and LGBTQ communities and violation of the DC Human Right Act.”

This is the complete list of properties they looked at. There were 153 "persons of concern" that had "disqualifying histories". 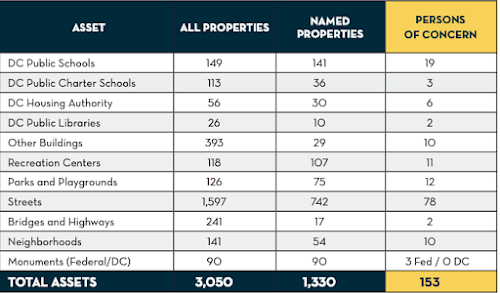 Who are some of those 153 persons that D.C. decided had "disqualifying histories"?

I can't help but wonder why they did not also recommend that the name of their city also be changed?After all, why would they allow the name Washington be used at all?

It does not end there either as Columbia is derived from the name of Christopher Columbus. Washington, D.C. is not a good name in the cancel culture we live in today.

All of this merges with a larger narrative that many Leftists use today that the United States of America is inherently flawed and evil because slavery was not explicitly forbidden in its founding documents. The argument follows that all of the Founders, at a minimum, were complicit in supporting the institution of slavery and that everything that follows is forever tainted and illegitimate.

I find it amusing that the primary thing that progressives seem to have that supports their view that the country is inherently flawed is to cite things from 250 years ago. I guess none of the good that the country did over the next 250 years counts? Being the first country in the world to provide power to the people to govern themselves. Providing the highest standard of living to people in the history of the world. Confronting and defeating the axis of evil (Germany and Japan) in WWII. Rebuilding those countries and returning those countries to the citizens after they had been defeated. When has that ever been done in the history of mankind?

It should also be remembered that our Founders inherited the slave system from the British. It was not an invention by our Founders. In fact, a little known fact is that in the first draft of the Declaration of Independence Thomas Jefferson included a provision that attacked slavery and the King's actions in "suppressing every legislative attempt to prohibit or restrain this execrable commerce." This passage was deleted in the final Declaration that was approved but I think it pretty clearly shows that Jefferson was not aiding in "the construction of institutionalized racism and subjugation of racism" as has been alleged by Leftists.  He was actually attempting to deconstruct it.

Yes, some of the Founders owned slaves but most of those were inherited. Most of our Founders wanted to curtail and find a way out of slavery. That is one of the main reasons that slaves were only counted as 3/5 in census calculations for the number of reps each state got in Congress. It was done to limit the influence of the slave states so they could not expand the practice. It was to put pressure on those states to end the practice. Notice it did not apply to free black citizens. They were fully counted. It only applied to slaves. It was a penalty.

"We must all hang together or most assuredly we will all hang separately."

The larger goal of independence from Great Britain took precedence as it was not possible to move forward without all colonies being united on the issue of slavery. Tough compromises are necessary on tough issues. Moving forward allows for a fight for another day. Retaining the status quo accomplished nothing for the cause of freedom in the 1770's---for anyone---colonists or slaves.

Jefferson was later instrumental in making sure there was a ban on slavery in the Northwest Ordinance in 1787 and it was Jefferson who as President initiated the legislation that banned the importation of any more slaves.

Progressives would clearly like to ban fossil fuels, but despite having a President like Obama and Democrat majorities in the House and Senate in his first term, it has not been done. Fossil fuels have not even been banned in liberal states like California, New York, Vermont or Hawaii.

Why not? It is just not practical to do it right now. Lights would go out around the nation. Cars would not run. Trucks could not make deliveries. Food production would plummet.  In addition, it would devastate a number of states economically. Do you just write off millions of jobs in Texas, Oklahoma, North Dakota, Pennsylvania and other states?

Our Founders had to balance similar concerns. The record is clear that most were uncomfortable with the practice of slavery they had inherited. However, they had to balance that against other issues and concerns while working to make changes in the future.

Joe Biden's son made millions of dollars on the Board of a fossil fuel company in Ukraine. I am sure that there are plenty of progressives that have oil and gas stocks in their stock or retirement portfolios. Some might have inherited them. Progressives think that burning fossil fuels is going to be the end of the earth. The fact that they profit from them does not make them evil. It is the world they live in today.

Joe Biden was in Pennsylvania this week saying that he has no intention of banning fracking. Of course, several months ago during the Democrat primary campaign he said the exact opposite.

Will the Democrats say that Biden now has a disqualifying history? Of course not. They understand reality and so does he. Biden and the Democrats have a bigger purpose in mind right now. Biden wants to be President and he likely cannot achieve that goal if he does not win Pennsylvania. He is not going to do that by wrecking the economy in that state.

It was no different with our Founders. They wanted freedom from Great Britain. They were not going to achieve that goal by dividing the colonies at the outset.

There is one difference between the Founders and Biden. They weren't talking out of both sides of their mouth on this issue to the voters. After all, they were trying to get to the point of allowing people to vote and choose their own representatives.

The reality is that all men are imperfect. Jefferson and Washington and our founders inherited a world that was imperfect but they did their best to change it for the better.

However, they made it a whole lot better than it was. They also established a foundation of freedom that endures today. Should that not account for a fair and balanced view of the contributions of Jefferson, Washington and others who founded the United States at great risk and cost to themselves?

The framework they established also provided a model that has provided rights and freedom for billions of other people on this earth that was unheard of before these men made that Declaration in 1776.

Our Founders were not inherently flawed. They devised a system of government that has survived longer than anything in existence in the world today. Think about it. UK, France, Germany,  China. Russia, Japan are all operating under a different governing system than they were 200 years ago. The USA has endured. These men were flawed? No, they were geniuses.

I don't think we can say the same thing about those who are running the city of Washington, D.C. these days.
Our country has been dealing with a pandemic for six months. Millions of jobs have been lost. Children cannot go to school. Rioters have been roaming the streets of Washington, DC and other cities  intimidating citizens and damaging public and private property.
With all of this going on the leadership of that city considered it a priority to spend time, resources and money "identifying persons of concern whose life stories may have conflicted with the values of the residents of the District of Columbia today"?
What values are those?
It doesn't appear they have much to do with what we used to consider were American values.
Who would ever think that this is a sight that might be endangered?
It actually might be only one election away.
Posted by BeeLine at 7:27 PM