It Will End When We Stop Counting

I am often asked when will it end?

When will we take off the masks, gather in restaurants, attend concerts and the theatre and have our children back in school?

I don't know the answer to that.

I do know that it will not occur until we stop counting and reporting cases and deaths every day.

As long as every case and every death is reported daily there is no hope of returning to normal.

It is impossible for the human brain to operate normally if it is being told that there is something to fear whenever they turn on the television, listen to the radio or check their social media feeds.

Consider everything that has been in the news over the last few weeks just concerning Covid-19 cases among college students.

Here is an example of a report within the last day involving the University of Wisconsin.

UW-Madison is moving all classes online and quarantining students in two of its largest dorms for at least the next two weeks, the most significant step by the university to curb a COVID-19 outbreak that has surpassed 1,000 infections in mere days.

Like most universities, Wisconsin has a Covid-19 dashboard that meticulously documents every case and test involving Covid-19.

It is updated daily.

Here were the number of positive cases as of September 9 as reported on that University of Wisconsin-Madison dashboard.

Note how small the faculty and staff cases are compared to those of the students.

There is not once hospitalization reported on that dashboard.

Here is the Notre Dame dashboard. Notice that 94% of all student cases are reported as having already recovered.

This is the University of Dayton dashboard. It tells a similar story. Almost 1,200 cases since late August but almost 1,000 have already recovered

In fact, Andrew Bostom has been tracking the cases at a number of colleges. This list is not all inclusive, and it is based on data from a couple of days ago, but he has yet to find one hospitalization in the cases at any of these colleges. 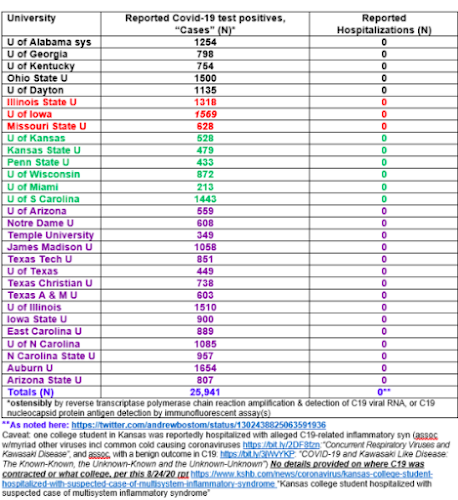 It is often said in business that "what gets measured, gets managed".

The same principle applies with Covid but it should more appropriately be said, "what gets measured, unsettles the mind."

What might be the effects if every college student who got drunk was reported daily? Or those tested positive for venereal disease? Or those who had the seasonal flu? Or had another strain of coronavirus---the common cold?

I know of nothing else in my experience that gets measured and reported in this way and is splashed across the media every day.

The closest comparison that I can come up with is what you see reported after an airplane crash or a natural disaster like an earthquake, hurricane or tornado. However, these counts last a couple days rather than six months.

The reporting on Covid-19 is much like seeing reports on an airplane crash every day for six months.

Think for minute if every automobile accident and every fatality were reported every single day.

There are over 6.7 million police-reported auto accidents each year. That is over 18,350 per day according to the latest data from the National Highway Traffic Safety Administration.

An average of 3,300 are injured in auto accidents every day.

92 die on average every day.

Would you be as willing to get in your car every day if you heard those stats on the radio every morning?

What about if every heart attack or stroke and every death from cardiovascular disease was reported every day?

There are 1.5 million of those every year according to the CDC. That is more than 4,000 per day.

Do you think that if this was reported in the same manner as Covid-19 has been reported there might be a lot more people living healthier lifestyles?

What about if every abortion performed in the previous 24 hours was reported every day?

There are over 800,000 abortions performed annually in the United States according to the Guttmacher Institute which is the "independent research arm" of Planned Parenthood.

Planned Parenthood performed almost half of that total alone (345,672).

That works out to about 2,200 abortions per day in total in which almost 1,000 are done per day by Planned Parenthood.

Would there be as many people in support of abortion if they heard these facts every day?

To put all of this in context, the U.S. average daily death count from Covid-19 over the last 7-day rolling average is 730.

That is less than 1/3 of those who died of cardiovascular disease. It is also only 1/3 of the number of abortions being performed every day in the United States.

Since the CDC officially started tracking Covid-19 in February, 1,894,447 million Americans have died from all causes. 91.7% of those deaths did not have Covid-19 on the death certificate as even a contributing factor, let alone the major cause of death.

Even for those 85 years of age and older, less than 10% died of something even partially related to Covid-19 according to the CDC. Over 90%+ died of another cause.

In those between ages 0-24, there have been 35,642 deaths from all causes since February. 377 have listed Covid-19 as a contributing factor. 98.9% died of something else. It needs to be remembered as well that there are 104 million in that age group in the United States. The means the chances of someone dying from any cause in that age group since February was .000343. For Covid it is just 1.1% of that number.

Of course, we never hear about that "something else". All we hear about are Covid cases and deaths.

Seeing where we are today reminds me of a blog post I wrote in late March in which I cited an interview with a pulmonologist in Germany, Dr. Wolfgang Wodarg, who was arguing at the time that the biggest reason that Covid-19 was getting the attention it was had more to due with the fact that there was a test for it and the politicians and media had gotten involved. Without that, all of this would not have gotten any where near the attention it has.

His view of the Covid-19 crisis is that it is an example of the scientists and virologists getting the attention of the government and politicians such that the hype has vastly exceeded the virological frame that should have surrounded it. He says this would have never been considered anything extraordinary if it had not crossed into the political and media realm.  He is not seeing anything much different than he did in any flu season in his career.

Wodarg makes the point that each year coronaviruses generally have made up 7-15% of respiratory viruses. Interestingly, the testing that has been done so far nationally (over 400,000 cases) is running right around that percentage range in testing of those with symptoms in the United States.

We now have done over 84 million Covid-19 tests. We are now doing almost as many Covid-19 tests each day as we do in an entire year for the seasonal flu.

It is a little harder to compare the positivity number we were seeing in March to the cases today since many more people are being tested that have no symptoms when almost all people being tested earlier had some type of respiratory symptoms. However, positive cases are running at about 5% of all tests right now and this undoubtedly includes a lot of false positives. The New York Times recently reported that 90% of all confirmed cases might disappear if a less sensitive PCR testing protocol was utilized. Many tests seem to be picking up trace DNA material that is not indicative of a contagious virus in the body.

Seeing all this might explain a little better why the Obama administration stopped testing for H1N1 flu in 2009 and ceased counting individual cases.

Have you ever heard of the old adage, "out of sight, out of mind"?  President Obama and Vice President Biden were clearly familiar with it.

Sharyl Attkisson of CBS News reported this in 2009 about H1N1 testing.

Some public health officials privately disagreed with the decision to stop testing and counting, telling CBS News that continued tracking of this new and possibly changing virus was important because H1N1 has a different epidemiology, affects younger people more than seasonal flu and has been shown to have a higher case fatality rate than other flu virus strains.

CBS News learned that the decision to stop counting H1N1 flu cases was made so hastily that states weren't given the opportunity to provide input. Instead, on July 24, the Council for State and Territorial Epidemiologists, CSTE, issued the following notice to state public health officials on behalf of the CDC:

"Attached are the Q&As that will be posted on the CDC website tomorrow explaining why CDC is no longer reporting case counts for novel H1N1. CDC would have liked to have run these by you for input but unfortunately there was not enough time before these needed to be posted (emphasis added)."

What do you think the reaction would be if the Trump administration did something similar?

We all know the answer to that.

I am not saying that we shouldn't count every case and every death. They are all important. However, so are the drug deaths, vehicle deaths, cancer and infant deaths we have every day in every year. What is missing right now is the context of Covid compared to everything else.

How then will it all end?

People must feel confident before things can return to normal.

However, how can people feel confident when they are inundated every day with numbers without any context and they are told they are going to die if they don't wear a mask? And every trip to the store and every virtual school session reinforces that narrative.

It will not end until we stop counting.

The counting will also most assuredly not stop anytime before November 3.

That is something you can definitely COUNT on.