Actors On A Stage

Politicians are nothing more than actors playing a role on a stage.

They perform their role based on what they believe to be the expectations of the audience.

If you understand this you can make much better sense of what is going on in politics.

The first thing you have to understand is that a politician is NOTHING unless they are elected. They only have power if they hold office. They cannot hold office unless they get more votes than their opponent.

Therefore, a politician is ALWAYS going to be focused primarily on gaining (or retaining) that power.

That power can only be obtained from the votes of people. The people are sovereign in our system. Their power is absolute.  Unfortunately, too many people don't believe it. The simple fact is that politicians have no power unless the people provide it.

Remember Barack Obama in the 2008 campaign who told us that marriage was between one man and one woman. Remember Hillary Clinton in the U.S.Senate who was in favor of building a wall on the Southern border? Was that an act or was the act later when they later reversed their positions?

If politicians are actors playing a role it is therefore hardly a surprise that Ronald Reagan was so effective on the political stage. There was no one better at delivering a line or and being able to say it with such genial sincerity.

Donald Trump came to politics from a different part of the entertainment industry. Yes, he made a lot of money in real estate but he drew attention to his projects based on understanding how to promote his properties and building his brand.

Trump also had years of experience in playing a "role" on his reality tv show, "The Apprentice".

What you get with Trump is probably more authentic than 99% of politicians. However, make no mistake he is also playing a role.

I have no doubt that Trump would have never agreed to locking down the country over Covid if he was not an actor on a stage. His instincts screamed at him this was not the way to go. However, he knew the audience was not going to buy it. That was particularly true knowing there were media critics who would have made sure that their audiences did not buy it.

This brings us to Joe Biden.

Here is a man who has been an actor on a stage for 47 years.

If there is anyone who proves my point that politicians are actors on a stage it is Joe Biden.

He has spent a lifetime in politics delivering lines he thinks the audience wants to hear.

The problem with Biden is that has a long history of changing his "act" for the audience as he believes it has changed over the years.

Biden also has a habit of embellishing and evading the truth with the lines he recites on stage.

For example, Joe Biden knows that voters are not looking to elect someone from the bottom of their class. Biden ranked 76th out of 85 in his law school class. He told voters in 1987 that he ranked in the top half of his class, was on a full academic scholarship and had graduated from college with three degrees. None of these were true but that was much a better "act" than the truth.

You can view news reports of this episode here from the 1980's.

Biden dropped out of the 1988 Presidential race after it was discovered he had plagiarized phrases and mannerisms of a British politician in his speeches. To make matters worse, when this occurred it was also revealed that Biden had also been charged with plagiarizing a paper in law school. It seems that the script that Biden may not even be original.

Everyone feels sympathy for Biden losing his wife and young daughter in an auto accident shortly after he was elected to the Senate in 1972. However, over the years that horrific episode in Biden's life must not have been bad enough to gain the sympathy he wanted from his audience. Biden has stated on the political stage that the accident was caused by a drunk truck driver who broadsided his wife's car that terrible day.

However, that is not what happened.

Now-retired Delaware Superior Court Judge Jerome O. Herlihy, who oversaw the investigation as chief deputy attorney general, told Politico, “She had a stop sign. The truck driver did not.”

In 2008, he (Biden) told the Post that rumors about alcohol playing a role in the accident were “incorrect.”

At age 77 the problem for Biden now is that he has been on that political stage for almost 50 years and he seems to not realize that all those years playing to different audiences is catching up to him with contradictory statements.

Today he knows that he cannot be elected without winning a huge majority of the Black vote.

However, he once was an outspoken critic of school busing programs and desegregation efforts.

He was the original author of the 1994 crime bill that stiffened criminal penalties, provided funding for an additional 100,000 police officers and construction of more prisons in order "to take back the streets."

Watch this video of Biden on the Senate floor in 1993 advocating for that bill and ask yourself where is this man today?

Biden has said during this campaign he thinks money should be "redirected" away from the police.

He refuses to criticize the radicals that have taken over the streets.

Has Biden changed this much over the years or is everything an act?

Biden is even claiming to some audiences now that it is Donald Trump wants to defund the police. That claim is absolutely laughable.

During the Democrat primary Biden was pretty clear when questioned by liberals that he wanted to ban fracking.

He is now says that anyone who says he wants to ban fracking is lying.

Last week Biden was asked about his vote for NAFTA in 1993. He said he was really against NAFTA after he voted for it. 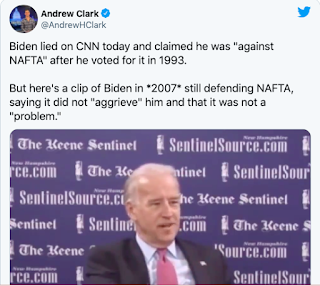 He blamed the problems with NAFTA on the Bush administration saying it did not keep its commitments on the treaty.

The only problem with that is that NAFTA went into effect January 1, 1994 under the Clinton administration. George W. Bush did not take office until 2001--seven years after that. Any commitments were made by Bill Clinton and the Democrats. Looking at the clip above from 2007 it does not appear Biden had a problem with NAFTA six years into the Bush administration.

Joe Biden has been a politician his entire adult life. He was elected to the Senate when he was 29 years of age and took office weeks after the minimum Constitutional age of 30. That means he has been acting on the political stage for close to 50 years.

When you do something that long it gets hard to discern the difference between the "role" and "reality".

It is also apparent that age is doing Biden no favors in that regard right now.

More troubling is that we really don't know if Biden the actor has really become nothing more than Biden the puppet.

Who is writing his scripts for the teleprompter?

Who is orchestrating his policies?

Is Joe Biden really capable of discharging the duties of President of the United States?

It does not appear so in his campaigning thus far.

For example, this weekend Donald Trump made several stops in Nevada, did a rally in Reno Saturday night and then had three more stops in Las Vegas on Sunday. Trump is going to California on Monday to survey the damage by the wildfires and doing another rally in Arizona on Tuesday.

Biden did not leave his home the entire weekend that I could see.

Is he up to the job or does he just want the role?

Who is really pulling the strings in all of this?

I understand that acting is a part of American politics.

However, I am not sure we have ever gotten this close to possibly electing a  real, life puppet for that large stage.